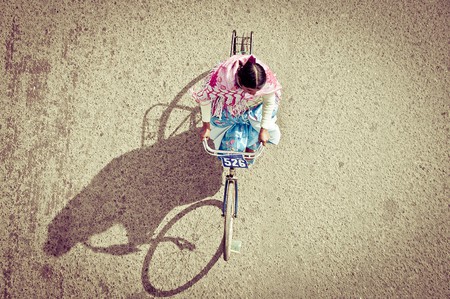 Like most good stories, this project began on a night out. Initially, the objective was to share one photographer's perspective with another. The first step towards becoming a collective was the debut of the SinMotivo photography exhibition, showcasing a chorrellana of photographs reflecting diverse things about daily life.

Following the exhibition, SinMotivo published SinMotivo Vol.1, a free print magazine promoting the work of the collective. Five more editions followed, each with a different theme. Recruiting new members, SinMotivo transformed into a creative place to view, showcase and discuss photography. The collective began to organize and participate in various audio-visual showcases, festivals, curadurias and workshops. In addition, the collective published two photobooks; Ensayos Fotográficos (2011) and La Ciudad y la Mirada (2012). In 2010, SinMotivo also began producing Revista Diafragma a Bolivian photography magazine, in order to promote and support the craft of photography worldwide. All of these accomplishments led the collective to be featured in the first Bolivian photography book ever, Fotografiía Boliviana, edited by Accion Cultural, last year. Outside Bolivia, SinMotivo has been invited to participate in multiple exhibits, from Belgium and France to Australia, Mexico and Canada.

Currently, the SinMotivo photography studio is based in the Sopocachi neighborhood of La Paz. This space is more than an office. It’s a place that allows the collective to plan projects and host audio-visual activities, like lectures, presentations, workshops and exhibitions, as well as focus on commercial projects, ranging from documentaries to advertisements. Many ask: Why sin motivo? The phrase is a paceño idiom meaning ‘no reason’. It is also an oxymoron meaning ‘without light’: a play on words, similar to the well-known phrase sin querer queriendo, coined by the late, beloved comedian Roberto Gomez Bolaños: Chespirito.

SinMotivo is a group of photographers and filmmakers with different viewpoints and perspectives, mutually benefiting one another. By sharing a studio, the members share or absorb ideas and can receive or give constructive criticism. Although SinMotivo may have been envisioned from one perspective, the result is and will always be collective.