SIMPACHAMAMA - Helping to reduce deforestation in Bolivia, one click at a time 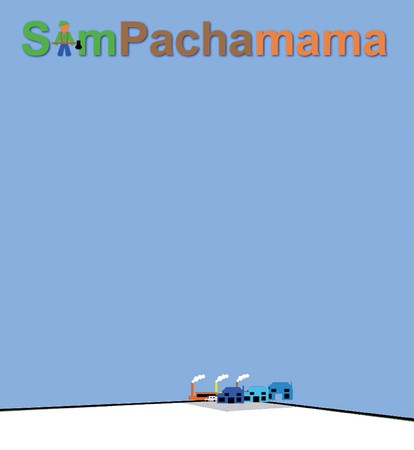 I played SimPachamama for the first time 4 hours after landing in La Paz. In my zombie-like state, I found the game strangely addictive and continued to play it in a quest to become a better virtual town mayor.

The game is not only compelling and fun, but related to the increasingly relevant debate surrounding deforestation. The goal of the game is to find the right combination of development policies that will improve the life of the town dwellers while managing to reduce deforestation. It has a similar feel to the SIMS, in which you, the player, are in total control. On the left side of the screen, you have several game options. On the right side, are the indicators of your town’s development. Smiley faces are the barometer of your townspeople’s happiness.

Easy, you say? Come and try for yourself.

The notion of using a game as a vehicle for talking about deforestation is, perhaps, not entirely novel. But what makes SimPachamama interesting is its simulation of this debate in a rural context.

In your role as a virtual mayor, for example, you must decide as you play along how to invest the money you’ve generated through decentralized conservation taxes. This setup empowers you as a mayor to have a long term impact in your region. This setup, however, already presupposes a decentralized scheme for deforestation policy, which is not common practice in the real world.

The span of each game is a full 20 years of your town’s development, which elapse during only minutes of real game time. The decisions you make as the mayor, and the policies you set in motion, will determine the growth of your town as well as its impact on the environment. As the game unravels, you can observe the virtual consequences of your local initiatives.

The often abstract question of foreign investment is very real for you as a rural mayor. Given the debate surrounding the impact of foreign investment on sustainable rural development in Bolivia and elsewhere, there are two gameplay settings on this issue. In one setting, you can play the game with access to foreign funds for your rural town. In the other, you choose to rely solely on local taxation as a source of revenue for your mayor’s office.

After playing the game a few times, the local need for external investment becomes strikingly apparent. I will admit that the first few times I played SimPachamama, I was determined to succeed without the support of foreign nations even though I was told my objective would prove almost impossible. Reality hit me rather quickly however, as I realized I could not sustain the development of my town without also making considerable investments. I was shocked by this discovery, both as a gamer and as someone who is engaged in the debate over deforestation policy. It proved impossible for me to help my town develop in the long term and reduce our rate of deforestation without the help of external funding.

This was, frankly, a slight disappointment for me at first; something akin to finding out you can't complete a game level without using cheat codes. But, afterwards, I saw the value in letting each player discover this lesson during the course of the game, illustrating the potential of SimPachamama as an awareness device to bring these issues to the forefront of global and local discussions.

As a simulation game, SimPachamama approaches the conservation debate from a pragmatic standpoint, as opposed to a fundamentalist one. This, I think, is a good thing. The problem with approaching conservation from a fundamentalist viewpoint is that it inhibits the process of making important compromises. Ardent activists for the environment often demand a comprehensive policy change at a national level as the only way to address the issue of conservation. SimPachamama explores a different path. It is aimed at specific communities in Bolivia, where a scheme of conservation wouldn’t overtly damage the local economy, instead it offers the possibility of generating income and creating jobs. As a result, you, as mayor, are challenged to design a practical, tailored strategy with a local focus.

This element is what makes SimPachamama a useful tool for exploring how to reduce deforestation without damaging the development of local communities. It is both a game and a tool to shape local policy. It’s this intriguing duality that grips you from the outset.

My obsession with the game started a few weeks ago when I attended a press conference held by INESAD, a think tank instrumental in the development of SimPachamama, where I managed to grab an informal interview with its director, Dr Lykke Andersen. We discussed the inspiration of SimPachamama, as well as some of the difficulties faced during its development. According to Dr Andersen the starting point was Bolivia’s rejection of the UN-led initiative REDD (Reducing Emissions from Deforestation and forest Degradation) in 2010. Undeterred by the obstacles this presented, INESAD and its partners persevered to produce this useful and absorbing game SimPachamama.

We also touched on one key aspect missing from SimPachamama; it assumes that the bureaucracy of local government will have no effect on decentralizing conservation initiatives. We agreed that this was a significant hurdle but that there are important examples both in Bolivia and the region that can contribute to solving this aspect of the debate.

I can't help but feel that the lessons learned from this game will face many challenges in their application. That said, I believe the spurning of REDD was beneficial insofar as it forced SimPachamama’s creators to rethink their approach and customise it to tackle the unique issues of conservation in Bolivia. By adopting a more pragmatic approach, I think they have a greater chance of persuading politicians to lend their support and begin to implement genuine change. While SimPachamama is certainly not the final solution for the development vs conservation debate, it does offer a place to start. Maybe that is enough for now.