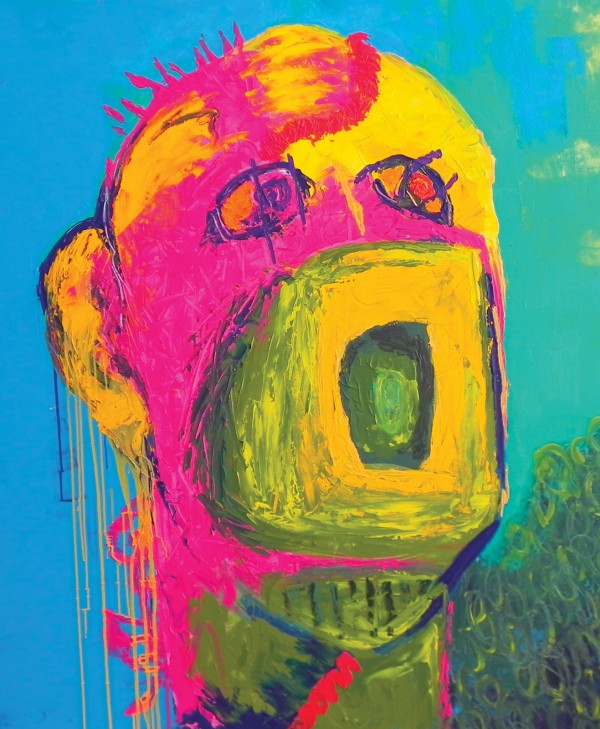 Gastón Ugalde: An Artistic Ode to the Andes

Only through art and architecture can we transform societies and build a better life.
—Gastón Ugalde

The face is distorted but strangely familiar. The vivid streaks of yellow, orange and blue are set against harsh geometric angles and piercing red eyes. The chamán comes to life through colours and patterns reminiscent of traditional Andean textiles – and it is so much more than just a face on a page.

Upon a first glance at the work of Bolivian artist Gastón Ugalde, its striking diversity is inescapable. Despite being widely known as a pioneer in the field of Latin American video-art in the ’70s, Ugalde has spent the time since experimenting widely with various media, including performance art, land installations, painting, photography and sculpture. His body of work explores various sociopolitical themes, principally focusing on social movements and local agrarian or cultural festivals. It is intriguing, bizarre and modern work, firmly rooted in Bolivian cultural tradition: inextricably bonded with the land of its creator.

With a career that has spanned decades and has included 81 individual and over 160 collective exhibitions, Ugalde’s immense artistic success stems from a passion he discovered as a child. ‘My first works of art were those that I made the first time I grabbed a pencil,’ he says. ‘The intention behind my work has always been the same: to capture my experiences. I never stopped being a child.’

Ugalde’s ethereal Salar de Uyuni photographic series, set against the landscape of the altiplano’s salt flats, showcase his concern with the interactions between light and colour in desolate spaces. ‘My constant source of inspiration is Bolivian territory and Andean light,’ he explains. Asked to describe his work using just three words, he simply responded, ‘land, colour and stone’. The result of this cocktail of simple ingredients is an oeuvre composed of truly stunning photographs. Fabrics, geometric shapes and human figures bursting with vivid colours slice through the cosmic emptiness of the natural backdrop. ‘Owing to the temperature of the light in open Andean territories, I can capture brilliant colours,’ Ugalde says. ‘When these participate alongside objects and people, I’m strengthening my study of the theory of colour and time within these spaces.’

Ugalde’s series of collages using coca leaves and his chamanes, surreal depictions of the human face inspired by shamanism, are further examples of his work interacting with its uniquely South American environment. The artist himself says these colourful visages are the product of ‘having had close encounters of the third kind with shamans during my Andean and Amazonian travels’. Forming a bridge between ancient traditions and modern artistic techniques, in their own way the chamanes are a true reflection of contemporary Bolivia – combining the best of the old and the new in a riot of colour. The coca leaf art includes images of dollar bills, John Lennon and Coca-Cola, a powerful statement of cultural exchange and interference.

Ugalde’s inspiration is limitless and his media varied. By using the photographic lens, amongst other things, to capture what he describes as ‘dust and disorder’, his diverse art reflects a spectacularly diverse country.