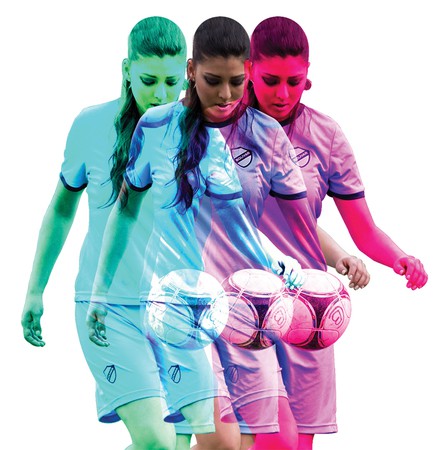 The struggle for Women's football to be recognised in Bolivia

Football is an integral part of Bolivian society, and this goes just as much for women’s football as it does for men’s. Festival tournaments bring women to the pitches even on national and religious holidays. However, something seems to be holding back the development of women’s football at a professional level. Tommy Walters identifies the many problems that women encounter when trying to break into this male-dominated sport.

On the concrete courts of El Tejar, in the North of La Paz, the difference between men and women's football is barely distinguishable. The matches attract similar crowds, the teams train four times a week, and the women play with just as much vigour and skill as the men. The same passion is shown, and even with less egotism involved (at this level, the women don't find it obligatory to dribble up the pitch on their own in a desperately ostentatious alpha-male display).

‘Nobody really cares about gender differences here’, Professor Mario Murillo says, in reference to football in the Bolivian countryside and at a grassroots level. Murillo is a Professor of Sociology at the Universidad Católica in La Paz, and specialises in football. According to him, ‘For both men and women, football is life. It is the next thing to a religion. In Easter, football tournaments take priority over everything else.’

This is unfortunately not the case of football at a professional level, where women struggle to find opportunities and recognition. The Federación Boliviana de Fútbol (FBF) is notoriously incompetent at promoting gender equality in this patriarchal sport. In fact, football officials at the highest levels can even get away with making disturbing sexist comments in public.

This season, for example, Mauricio Soria, who is the coach of Real Potosí, publicly harassed the manager of Santa Cruz side ‘Sports Boys’ during a match, making sexist remarks. ‘Shut your mouth,’ he said to Hilda Ordoñez, who is the first female coach to manage a top flight Bolivian football team. ‘Go wash some pots and dishes. You have nothing to do on this pitch,’ he added.

One of the main limiting factors surrounding professional women’s football in Bolivia is the lack of existing structures of competition for them. This is clear from Cassandra Camacho’s story, which is deeply telling of the struggle women face in the world of Bolivian football.

As a prominent player and Vice President for the women's club 'Las Ninfas', Camacho has personally experienced gender discrimination in the footballing industry. She has gone out of her way to organise official tournaments in La Paz, but is sadly familiar with rejection – she receives little to no support from the Federation. ‘We were once given two weeks,’ she said, ‘to form eight female teams for a tournament. We managed to do it easily with more than 100 girls on board. Then they cancelled the event, saying there was simply “not enough money or support”.’

Despite the obstacles she has faced as a female player, Camacho talks with great conviction and purpose. She was a former Miss La Paz Model in 2009 and has certainly found it a challenge to climb out of an industry based on delicacy and beauty, into one where she has had to prove herself through physical prowess and athletic talent.

Part of her inner strength comes from her Christian faith. She speaks of the inspiration she has gathered from Old Testament stories, as well as the motivation provided by her ‘dad-slash-coach’, Victor Camacho; a key figure who is constantly helping her to achieve future goals. Her fight to be recognised as a footballer, in spite of her former profession, seems to embody a more general struggle that Bolivian women face: to shed the traditional image of a woman –objectified and limited in career prospects– and become accepted in parts of society where men walk the avenues of influence.

Her first aspirations to play football professionally were met with surprise. ‘Go back to being a model,’ opponents used to shout at her. However, she has turned her past around and she now loves being underestimated.

‘Turning up to a press conference in stilettos and saying you are a footballer was often met with laughter,’ she exclaims. ‘But we would then invite the media to our matches, and they would have a very different impression of us by the end.’

A particular moment she cites was when her team, ‘Las Ninfas’, played at the Hernando Siles stadium in 2012 as a trial to become a part of Club Bolívar. ‘That game really got their attention,’ she says, as she remembers starting to be treated seriously a player, and even being compared to her male counterparts.

The need for role-models

Apart from the lack of structure, some of the female players who show promise are barred from the game given the broader gender obligations of Bolivian culture. ‘We've lost a lot of girls to unplanned pregnancies,’ Camacho recounts, ‘as well as to the conservative thinking of some parents’.

Most of the girls Camacho has encountered don't have a clear vision of how to grow in the sport due to a lack of adequate role models. It seems as if the route to fame in women's football hasn’t been a particularly well-trodden path. Most women footballers don’t even know whether they can be scouted or not.

‘In the States, it’s something that girls have grown up with,’ Camacho explains. ‘The role models are already there. They know the way they can make it to the national team. Here, you don’t exactly have a door that’s open to international tournaments.’

The only way success has been found abroad is through migration. Many Bolivian women now participate in Spanish leagues, especially around Sevilla. It seems fitting, then, that Sevilla was once described by Spanish playwright Lope de Vega as a ‘door between Europe and the Indies’. Bolivian women have reached the fringes of European football, but there is still a long way to go.

Camacho believes her personal struggle can lead as an example for others. Her aim is to show that it is possible for women to succeed at an international level. Camacho is already learning French as part of her dream to play for Lyon, the female team that have won the French league for six consecutive seasons.

‘There are times when it seems hopeless,’ she admits, ‘but I always see a light at the end of the tunnel.’ The next step, for her, is to start a league for women in La Paz that is recognised by the FBF.

Having listened to the shouts of support on the sidelines, spoken to the players about their religious training techniques, and witnessed the intense physical battles that play out on the pitch, it is easy to say women's football at base level is taken very seriously in Bolivia. But what is in store for the future of the profession?

There have been small improvements over time that bring hope to certain aspects of the sport. Aracely Castro, for example, who was born in a suburb of El Alto, has worked her way past international barriers to referee professionally around the world. But improvements like these remain exceptions. In Bolivia, it is a question of transforming entrenched views on football and gender stereotypes. Perhaps this could start with success stories of role models such as Cassandra Camacho, which prove to younger generations that it is possible to chip away at the male dominance of the sport.