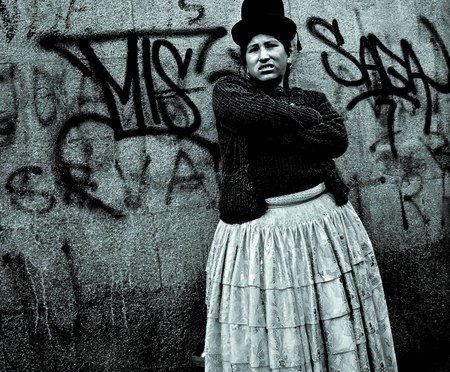 What makes a cholita a cholita.

There’s no need to go looking for cholitas around La Paz. It would be unusual and even noteworthy not to bump into one while walking around town or glancing down a busy street. With their distinctive pleated layer skirts, vibrant mantas, and eye-catching bowler hats, cholitas colour the city of La Paz with their unique style. But is it the just the outfit or is it something more that defines what it means to be a cholita? That was the question I set out to answer as I greeted Luisa, a local cholita who agreed to meet with me and talk about what it means to live life as a cholita in modern day Bolivia.

After a warm greeting, Luisa returns to the reserved, and sometimes timid nature that is sometimes associated with cholitas. We began to talk as the fruit shakes and empanadas arrived. While shy, Luisa quickly begins to open up as she speaks animatedly about her upbringing. For her, it was not so much a decision as a slow and steady process. From childhood, she was raised to be a cholita like all the women in her family. She even adds that if she has a daughter someday, she plans to dress her in cholita attire from a young age so the tradition can live on

Wanting to do so is becoming a rarity. Nowadays, most cholitas are opting to dress their daughters in more modern clothes to give them greater opportunities later in life. Luisa recalls not so long ago when men would yell “Chola!” at her as she walked down the street. Cholitas were kept out of universities, which left them with the stigma of no education. With the election of President Evo Morales, things began to get better and the ‘Law Against Racism And All Forms Of Discrimination’ (see article on Afro- Bolivians, page 9) passed in 2010 was another major step. Changes in the law and in social attitudes makes Luisa feel confident that in the future she will no longer suffer from discrimination. These changes notwithstanding, cholitas are not only known for their occasional timidity, but also for their stoicism. It could be argued, however, that their strength is more a product of the history of discrimination they have lived through, rather than one of their intrinsic qualities.

From an outsider’s point of view, what defines a cholita is her outfit: it distinguishes them and gives them their iconic identity around the city. Luisa informs me that it’s become so prominent these days that even some pseudo- cholitas try and pull off the style. To her, the clothing is very important, and she believes that without following the fashions, a cholita cannot be fully recognised as one. But is this the central characteristic of cholita life? Apparently not. With the question still not answered, I feel it’s time to be blunt and get my answer . What makes her and her fellow bowler-hatted, timidyet- thick-skinned women cholitas? Family, she tells me. One can dress up and get all of the customs right, but essentially, a family makes a woman a cholita. Just as Luisa’s mother dressed her in pollera, shawls and jewellery, so will she to her daughter one day because it is not just a cultural tradition, it is a family one.