SEEING THE CITY THROUGH A BALACLAVA 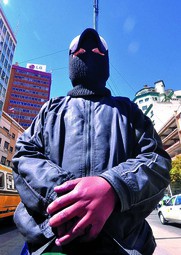 Fliss Lloyd goes on a tour with Hormigón Armado to understand what the city looks like to a shoe shiner.

It was an afternoon well spent when I decided to do  of La Paz through the eyes of one of the city's 'seen-but-never-heard' Lustrabotas . Yes, admittedly I had my own preconceptions of the tour before taking it. Like many gringos who have spent a month or two traveling in Bolivia, I too asked myself: 'Why bother with another city tour? I've been in Bolivia for nearly four months now—I basically know the whole of this country.

It didn’t take me long to realise how short sighted I had been. Starting at 2pm, I spent a sunny afternoon walking the height of La Paz, seeing the beautiful city through the eyes of someone who is more familiar with the labyrinths of the Gran Cementerio and the back alleys of Mercado Uruguay than with the Witches Market on Calle Sagarnaga and the tourist hotspots of the sprawling Prado. I was able to glimpse sides of the city to which I’d been oblivious since my arrival.

For 80 Bolivianos (£8) I had my own personal tour guide, Roger, a young Lustrabota who has been working with Hormigón Armado for three and a half years, earning him a degree of leadership among other shoe shiners with more limited experience.

Hormigón Armado is a foundation that supports the city’s shoe shiners on several fronts: the organise an environment in which boys and girls who work on the street can co-produce a publication through training initiatives, and also by providing them with the publications themselves, which the shoe-shiners can sell to supplement their income. They have also created a community in which those who are part of the project can attend workshops and have fun days out.

Through his involvement with the organisation, Roger was not only a shoe shiner, but an alternative and highly specialised city tour guide. For those who aren't just passing through La Paz on the travellers trail this tour shows both initiative and many nooks and crannies of the city untouched by the traveller's trampling foot.

According to Roger, the route of the tour is pre-decided between the Lustrabotas and the leader of Hormigón Armado. 100% of the proceeds go to the guide. Until a few years ago, Roger was living out in the countryside with his family where unemployment runs high and earning money is a challenge. In search of a job and a means to help their family, young kids like Roger take it upon themselves to move to La Paz to try their luck as shoe shiners. Of course, children end up working in this occupation through various reasons including homelessness and violence at home.

Our first stop was the Cemetery, where Roger explained in detail the customs and traditions that surround the death in Bolivia. He also named several famous people who had been buried there, such as former Presidents and Military Generals. Next we went to visit nine further points of interest, such as ‘Fish Street’, where the fish from Lake Titicaca is prepared and sold in bulk at economic prices. We hung out at crowded Ice Cream Stalls where mountains of fuschia-pink cinnamon ice cream beckons pedestrians to linger. We walked along ‘Cholita Hat Street’, where hats ranging between 300 and 1500 Bolivianos don the heads of Cholitas of every economic background. We visited the Mercado Uruguay, tucked away in a back alley, where we came face-to-face with live ducks and fluffy guinea pigs which were soon to become someone's dinner.

I began to fawn over the garments on the Cholita Clothes Street, only to learn that the metres and metres of silky, decorated material led to a surprisingly expensive way to dress; refreshment came on the street adorned with endless rows of inexpensive, organic fruit which, along with the fish, would later be brought down to Mercado Rodriguez, to be sold at a higher price.
​
To show me where the shoe shiners lunched at a discount, Roger took me to Comedor Popular, a food court near Max Paredes. Last but not least, we arrived at the infamous San Pedro prison, where I was told prisoners often live with their families, including children, in order not to be separated.

It was a thoroughly interesting tour that took me to parts of the city I had never known about, let alone thought to visit. At times I found myself walking off the beaten track on overturned piles of cement and gravel, behind the stalls where vendors sell their wares, or through crowds where I was asked to hold my bag close to me. In other words, I was walking through the real La Paz, as seen through the balaclava'd eyes of the shoeshiner.
​