Scattering seeds: Catholicism and the pachamama 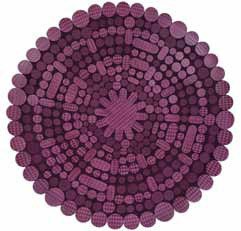 Pachamama has provided fertile ground for the growth of Catholicism in Bolivia.

Coming from a Catholic high-school background, I thought I'd find plenty of common ground with the people of Bolivia. After all, about 95 percent of Bolivia's population professes the Catholic faith. But 85 percent of Bolivians are of indigenous descent, with ancestors who worshipped Aymara, Quechuan, and other pre-Hispanic deities. The influence of indigenous belief still reverberates today, even in the Catholic Church. It's particularly evident in the Bolivian portrayal of the Virgin Mary.

The Catholic Church has always portrayed the Virgin Mary as chaste, of course, and Jesus Christ as being born without sexual corruption. But in Bolivia, far from being simply the remote and largely silent figure portrayed in European Catholicism, the Virgin Mary is often seen as an active and beneficent divine being. It is not uncommon to see a student ask the Virgin for a good grade on a test, or to hear a helpless romantic ask the Virgin for intercession in a starcrossed romance. The Virgin Mary is not just a distant religious figure whose only role in Catholicism was giving birth to Christ; here, she takes center stage and 'acts as the Mother of the People', says Father Ivan Bravo, the vicar of the Montículo parish in La Paz.

But why is that? The answer can be traced back to the introduction of Catholicism in Bolivia. When the Spanish invaded the Americas, they brought with them their Catholic religion, forcing it upon the indigenous people. But the people, devout to their own gods, resisted these advances. 'The Spanish were able to eliminate the natives' temples, but they couldn't eliminate their beliefs,' asserts historian Dr. Fernando Cajias. The Aymara and the Quechua, the dominant tribes in the Bolivian highlands (the altiplano) based their faith on the natural world, holding the sun, the earth, and the water as sacred, and worshipped deities that represented them. The earth provided for them, so they had a strong connection to it. And the Spanish, even at the height of their power, were never quite able to stop the sun from rising, or the earth from producing food.

So the Spaniards had to adopt a different plan of attack. As Dr. Cajias says, 'The missionaries realised they couldn't completely destroy the indigenous belief after struggling to force Catholicism on the people. They then decided to mix Catholic beliefs and figures with native beliefs and figures.' At the center of this syncretism are Pachamama and the Virgin Mary. Pachamama is an Aymara and Quechuan word loosely meaning 'Mother Earth.' The Andean people saw Pachamama as a mother who gave them food, water, and all of nature. She was considered a fertile mother because of the fertile land. And the Catholic figure most resembling a caring mother? The Virgin Mary.

With this the new strategy in place, Catholicism slowly took root. Outside Cochabamba, in the town of Quillacollo, the Festival of Urkupiña is held every August, celebrating the fusion of the Virgin Mary and Pachamama. The story of this mingling of two cultures dates back to pre-colonial times, when the indigenous people of the Cochabamba Valley would make offerings to a waca—a sacred hill where spiritual energy is concentrated—where Quillacollo now sits. This particular waca was revered for its female energy, and devotees would make offerings to the Pachamama there.

Then, in the late 18th century, when Spanish colonialism was in full bloom and the Catholic Church was trying to make inroads among the native population, a young indigenous shepherd girl was approached by an apparition of the Virgin Mary on the waca. The next day, when she returned to the hill with her parents, the Virgin appeared once again. The girl shouted, 'Ork'hopiña! Ork'hopiña!'—'She's already on the hill,' in Quechua. Since then, the Festival of Urkupiña is held every year, celebrating not only the Virgin and her Pachamama predecessor, but also national integration, the combining of Spanish and indigenous culture. It is, though, an uneasy synthesis, with plenty of disagreement as to how the Virgin and Pachamama actually fit together. Dr. Cajias maintains that although indigenous belief is superimposed on Catholicism in Bolivia, the two systems are still distinct. 'It is not a fusion. There is not a temple for the Virgin Mary and Pachamama,' Dr. Cajias says. 'It is simply a symbiosis, because each has its own role in society.' And for the most part, the two have remained separate. 'People in Bolivia believe in Jesus Christ and follow Catholic teachings, but they also adhere to their ancestors' original Andean beliefs.'

But Father Bravo disagrees with the separate but equal belief. 'The Church in Bolivia has presented Mother Earth as a creation of God,' he says. 'Pachamama is so important in the people's belief that it can not be ignored, but Pachamama was created by God, and is not a separate goddess.' In other words, the Church accepts the people's love of Mother Earth because being grateful to Mother Earth is being grateful to God. 'The Second Vatican Council recognised that we have to reach people in different ways,' Father Bravo continues. 'Bolivian priests are able to understand the traditions because we come from them, and are able to reach the people because of it.' Open-mindedness and creativity are helping Catholicism stay strong in Bolivia.

Father Bravo uses the Parable of the Farmer Scattering Seed, from the Book of Mark, to illustrate Pachamama's significance to Catholicism. Jesus tells the story of a farmer who throws seeds on different surfaces. The seeds thrown on rocky soil sprout but then wither in the sun, and the seeds thrown among thorns are choked out from the sunlight. Only the seeds sown in fertile soil grow and yield crops. In Bolivia, the seeds of God's message must combine with the fertile, fecund, and ancient Mother Earth—like Jesus in Mary's womb—in order to yield a successful crop of Catholic Bolivians.