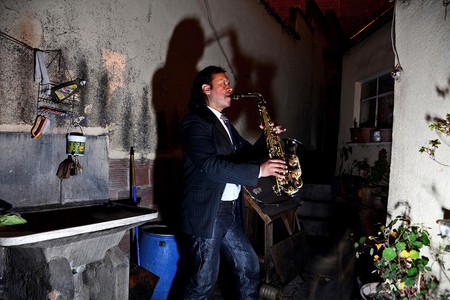 ‘You know that Américo came? He's friends with Superman, Wonder Woman, the Fantastic Four and Iron Man . . . . Saxoman and the Casanovas, that’s my boy, brother.’

Forty-three-year old Américo Estevez Román, better known as ‘Saxoman’, is a beaming character from La Paz, Bolivia, who dedicates his life exclusively to music and taking care of his family.

Américo is the nephew of Fernando Román Saavedra, the songwriter who created the famous song ‘Collita’ in the 1950s—whom Américo remembers clearly from his youth, and who he says inspired him to follow the path of musical creativity. Nowadays, Américo keeps his name alive on the musical scene with an adopted style and at the location where he gets by: on the street. He says that he started playing there out of necessity, and on it has made a lot of connections.

Américo’s children, who call themselves the Casanovas, go to regular school in the morning; in the afternoon, driven by Américo or his wife, Nelly, they go to the Conservatorio Nacional de Música. Américo is convinced that they will be great musicians in the future, and he tries to provide them with all the moral and economic support that he lacked during his upbringing.

This photo essay shows the daily routine of Saxoman’s family, which has stayed together while Saxoman has plied his craft throughout the years, playing on the street and at private parties. Saxoman can be found on facebook by searching “Saxoman y los Casanovas”.

Saxoman Playing his favourite instrument in the patio of his house, in wich he has lived since childhood