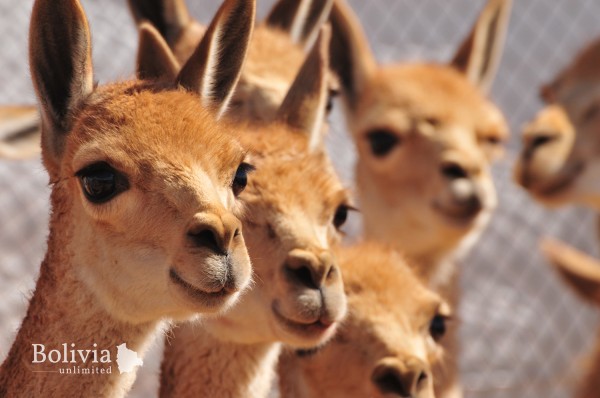 The creature with precious wool that almost went extinct 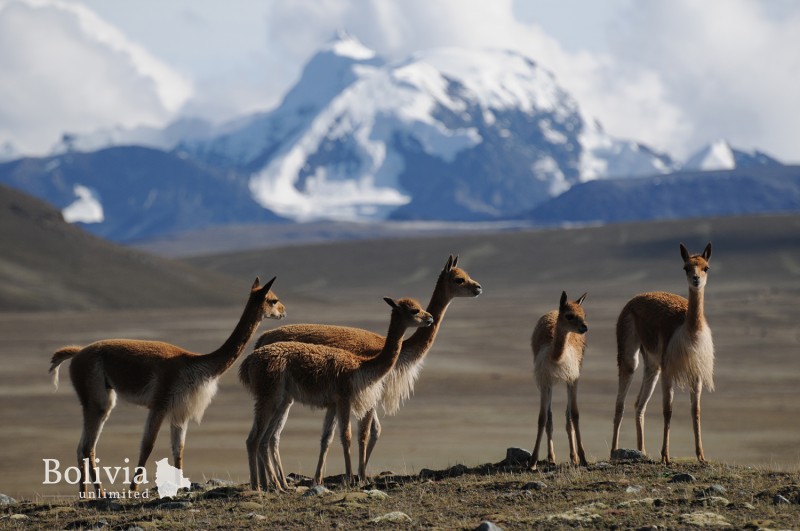 With Bambi eyes and neat, pointy ears, the slender, tawny vicuña is noticeably more elegant than its shaggy llama and alpaca cousins. It’s hard to believe that this ostensibly delicate creature, robust enough to roam the oxygen-starved altiplano, was once almost a bygone species. In the 1960s, when the number of vicuñas in the world dropped to less than 10,000, the Bolivian and Peruvian governments made an attempt to save the creature. The two governments signed an agreement that made it illegal to hunt the animal and designated protected areas for the vicuña in the form of national parks and natural reserves. The effort certainly succeeded in recovering its numbers. A 2009 census confirmed the existence in Bolivia of around 112,000 vicuñas – 27% of the world’s vicuña population – up from 2,000 in 1969. The challenge now is not only to maintain its population but to find sustainable ways to benefit from this potentially lucrative resource.

It is no secret that the vicuña’s value is as much ecological as it is economic. the silky-softness of the fabric yielded from its wool, treated and conditioned, is more coveted then cashmere in the textile industry. Untreated wool is priced at between $350 and $600 per kilo, and a finished product, like gloves or a coat, can sell for between $2,000 to a whopping $50,000.

Indeed, the rusty-hued hairs of the vicuña may very well be mistaken for threads of gold. This is why the vicuña has historically been a highly-revered creature and, naturally, highly in-demand. In the Pre-Columbian era, its luxurious wool clothed figures of high social status and was treated with a quasi-religious respect. Back then, the method used to obtain vicuña wool consisted in a ritual, called ‘chaku’, that involved gathering and shearing the creatures before returning them to the wild. The arrival of Spanish colonists, however, gave rise to a hunting trend that spelled the vicuña’s gradual demise. With no respect for indigenous beliefs but a fervent desire for the animal’s supple coat, they hunted the vicuña without control nor restriction, with a ruthless frequency that brought, at the end of the 1960s, the species to the brink of extinction.

The vicuña cannot be raised because it resists domestication. The sheer effort of capturing them in the wild was, and still is, enough to encourage hunters to prefer shooting and skinning them over the traditional ‘chaku’ method. Admittedly, the cost of assembling, hiring and feeding a team of 50 to 60 able-bodied people (which is the necessary number for a successful capture) is undeniably high. Added to this, months of careful observation are required in order to determine the best time and place to seize them. Prior to the attempted round up, one must monitor the migration and grazing habits of the elusive camelid herd. The use of a sustainable method, however, although demanding, is key not only to protect the country’s biodiversity, but also to diversify its economy. For the communities, it is profitable socially, economically and environmentally.

This is because the vicuña shares the Andean highlands with some of Bolivia’s rural communities. There are currently 108 communities involved in the vicuña conservation programme. The participation of these communities is essential for the protection of vicuña populations: they take care of and protect the vicuñas according to animal welfare standards defined by the government. In return, the government gives them the right to use and gain advantage from the fiber.

Daniel Maydana, who runs one of these programmes in the department of Potosí, has been working for the conservation of the species. His programme, which is sponsored by the Embassy of Canada, supports 10 indigenous communities in the municipality of Colcha K where about 4,500 vicuñas live in protected areas. The communities are encouraged to protect the animals and develop local capacities to shear the creature at a certain time each year, encouraging the integration of these communities to form cooperatives and stronger corralling teams. The promotion of this method is essential to establish a law-abiding technique to obtain vicuña wool and allow locals to benefit from this resource in a sustainable way.

Though it’s a Bolivian resource with great economic potential, Bolivia doesn’t have its own efficiently-functioning vicuña wool industry. Selling it with value-added rather than as a raw material would greatly increase its economic value. Since the country’s colonisation, however, the techniques for treating the fiber have been gradually lost over the centuries and now 95% of the world’s vicuña fiber is being sent to Italy to be processed. However, Maydana’s project is made possible thanks to the collaboration between the local councils of Colcha K, Los Lípez San Cristóbal, the San Cristóbal mining cooperative, the Embassy of Canada and Conservation International. The local municipality is also supporting the project with 10% of the total budget. Despite not receiving public state funding, these local initiatives are part of a series of governmental policies to protect the vicuña.

Due to this local loss of technical know-how, the vicuña wool that is sold in Bolivia has been previously exported, woven into a product, and then very rarely makes it back into the country. The high prices for these goods encourage poaching and the existence of a black-market that serves certain people who don vicuña wool for occasions such as the festival of Gran Poder, where some vicuña clothing is still used as a sign of prestige and high social status. According to Maydana, most vicuña wool products sold in Bolivia are made from illegally sourced material. Although the punishment for illegal traders is three to six years in prison, criminals somehow seem to slip through the legal net, circumventing the wool certification process. This uncertified wool is smuggled across the border to Peru, where it is often mixed with wool from other camelids to make a cheaper piece of clothing. As a result, there is no guarantee as to the quality and purity of most garments sold locally.

In addition to internal distribution issues surrounding vicuña-wool products, there are also significant obstacles when it comes to accessing the international market. Although the majority of the wool collected in Bolivia is shipped to manufacturers in Europe, the wool must first pass a complex certification procedure to be declared legal and thus exportable. Because vicuñas are a protected species locally and internationally, the certification process can be slow and arduous. From the moment of closing a sale to receiving payment for the wool, a merchant could be waiting for up to 20 months. The processing time was recently reduced to seven months, but last year it climbed back up to 14 months. By contrast, the median waiting time in Peru is no more than three weeks.

‘Banal things such as administrative obstacles and judicial insecurity are holding us back,’ Maydana says. Another bureaucratic hurdle is that sellers have to register as exporters, and their registration (which takes weeks to finalise in the first place) can be annulled for reasons such as not making a sale in a given amount of time. And, since 2017, according to the CITES convention, to be able to use the vicuña brand, industries that produce the final products have to issue a country of origin certificate. The implementation of this measure adds new barriers to commercialisation.

Maydana points out that, ‘There is a need to improve the export processes of vicuña fiber by making it faster and more flexible. This is how communities will end up benefiting economically from it, which ultimately is the main incentive [for the communities].’ He adds, ‘It is a strange thing that happens here in Bolivia, this lack of reliance on, or even awareness of how to benefit from, our resources and the international market. Unlike Peru,’ he explains, ‘which has an established an alpaca wool industry and is a country known for its alpacas. This is a country that’s closed to the world.’

Although there is faith that the number of vicuñas living in Bolivia, Peru, Chile, Argentina and Ecuador will climb to 400,000 by the next census, it remains to be seen whether administrative improvements will have been made so that the people of Bolivia can benefit from this thriving recuperation. 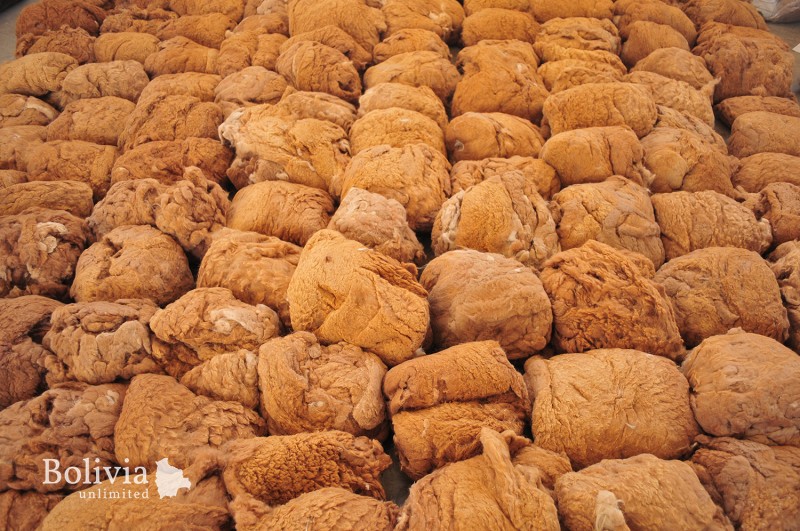