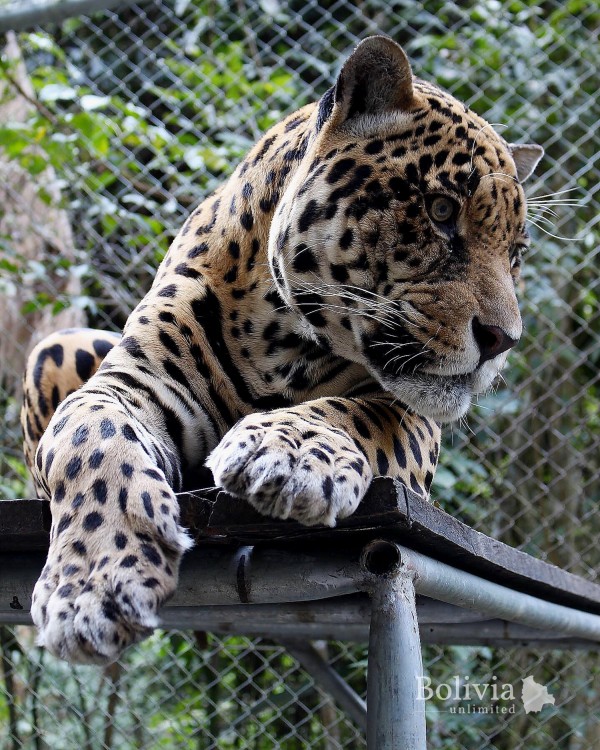 International illegal wildlife trafficking now threatens the extinction of many species native to Bolivia. Birds are the most commonly trafficked animal, with approximately 4,000 different species being traded worldwide. The Santa Cruz–based newspaper El Deber reported that the illicit trade has annual revenues of more than US$20,000 million, making it the fourth-most-lucrative illegal industry in the country (only trailing the trafficking of drugs, weapons and human beings). One of the major victims of Bolivia’s wildlife trafficking is the jaguar.

Poachers – who often work to supply to Chinese market, where there’s great demand for these feline beasts – kill and remove their prey’s fangs, which are then smuggled into the Asian market, where they are as valuable as gold or cocaine. There are merely 64,000 jaguars in the wild now, a number that has been dramatically decreasing, according to the International Union for Conservation of Nature. Where before only the bones of jaguars were used for traditional Chinese medicine, the whole of the big cat’s body is now more lucrative, with smugglers boasting of the additional supposed health benefits of the jaguar’s tongue, penis and other organs. There are even luxury restaurants in China that sell jaguar meat as a delicacy. Some people display necklaces made jaguar as a symbol of status, sexual prowess and power. The Chinese mafia is even getting into the game and fuelling wildlife trafficking in Bolivia by expanding into the taxidetermology, medicinal-products and pet-trade industries.

Bolivia’s park rangers try to defend Bolivia’s 22 protected areas of national interest, but they are not enough. La Paz’s Página Siete revealed that the guards are overworked – often working for 24 consecutive days, followed by only six rest days – and exhausted, with insufficient equipment, resources and personnel, facing daily threats of hunters, drug traffickers and nature itself. Many only have temporary contracts with low salaries yet must protect 77,985 hectares. Since 1995, 16 have lost their lives whilst guarding the land and two remain missing. In 2015 the authorities promised to increase the number of personnel, but the situation has not yet changed.

Virginia Ossio, together with her husband Marcelo Levy, has devoted her life to care for animals rescued from the illegal trade, and now is an official voice in Bolivia regarding environmental conservation and the illegal trafficking of America's big cat. The director and founder of La Senda Verde, a wildlife refuge in Coroico in Bolivia’s Yungas region, Ossio said that the trafficking epidemic of jaguar cubs first came to her attention in 2014, after the Bolivian postal service seized over 190 jaguar teeth bound for China (with many more believed to have been trafficked undetected). Jaguar mothers had been slaughtered for their fangs and body parts, and their cubs became a valuable ‘by-product’ destined to be sold as pets. Further alarm bells sounded when buyers were overheard on the radio by the World Conservation Society boasting about the prices they had been paid for jaguar fangs and body parts. 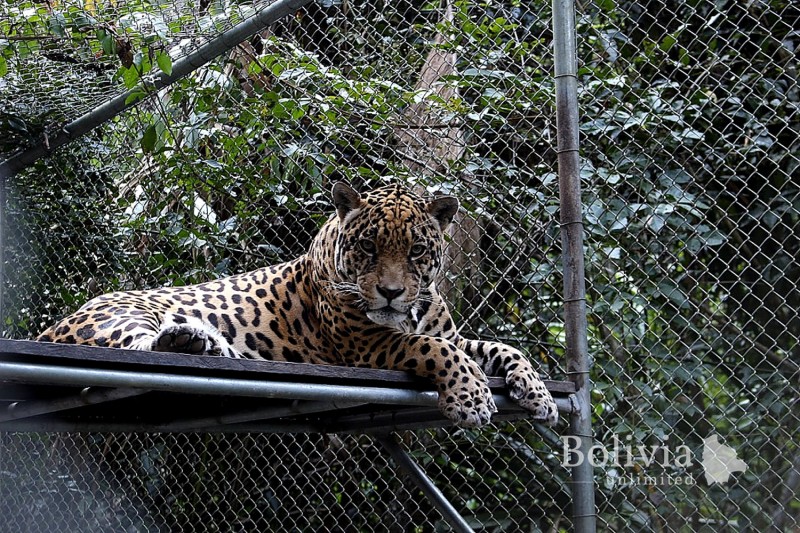 According to Bolivian journalist Roberto Navia Gabriel, this dire situation has only grown worse since 2014. In the tropical municipality of Sena, in the Pando department that borders Brazil, traffickers pay US$150 to US$400 for each jaguar fang, depending on its size. By the time the fang reaches China, it can sell for as much as US$2,500, a tenfold increase. Between 2013 and 2016, 380 jaguar teeth were seized by Bolivian authorities, and the trade has only grown since then. From April to September in 2016, the Bolivian Forestry and Environmental Police seized a total of 181 jaguar fangs destined for China.

Many hunters refer to these cats as tigers. When approached by Chinese buyers, they are often shocked by the prices offered; one hunter revealed to Página Siete that he was surprised that someone would pay him for fangs that were worth nothing to him.

‘We need to change the system and way of living,’ said Ossio. ‘Greed is harming the planet. People just don’t understand their impact.’ She suggested that the Bolivian government has had very little effect as environmental conversation is not currently a priority and poaching is a crime which warrants little to no punishment. Despite being clearly illegal, the risks for hunters and traffickers are relatively low. To tackle this, Ossio says, ‘We need to pressure, ask for more [jail] time’ and make the consequences more severe. ‘We are making it too easy for [traffickers],’ Ossio adds. ‘We are handing our ecosystem over to them.’

Ossio said that, despite her and her colleagues’ best efforts, sanctuaries like La Senda Verde are not the solution to the problem. Only one out of every ten animals taken out of the jungle survive. Prevention is the only way to solve the trafficking problem.

Jaguar cubs that come into Ossio’s care are extremely vulnerable and face numerous health problems. They are reliant on mother’s milk for the first three months of their lives, and without it they suffer bone, joint, digestive and immune problems. This makes them extremely hard to raise in captivity, and many die despite all efforts to save them.

As a result of the recent dramatic increase in animal trafficking, La Senda Verde’s animal population has more than quadrupled in the past five years. It now houses more than 800 rescued animals, from howler monkeys and macaw parrots to Andean spectacled bears and a vast array of reptiles.

‘Hopefully we will disappear and give the animals a chance.’

Whilst Ossio says that ‘we are opening the door to traffickers… We are offering them a buffet of options,’ she thinks it will be organised social movement movimientos ciudadanos that will drive necessary change. Local people working against trafficking is the only way to stop it. Her vision is educational, with prevention being a key focus. The Bolivian government has passed some legislation that has formalised certain protections for the jaguars and criminalises the trade. Those who incite, promote, capture or commercialise wild animals categorised as vulnerable face up to six years in jail. However, Ossio’s perspective is more radical and focuses on education to raise awareness of the wildlife-trafficking trade and its impact. As part of this, La Senda Verde offers free entrance to teachers and students from Coroico and charges a reduced entrance fee to Coroico’s 3,000 families to promote safe interactions and mutual understanding with the animals. Ossio strongly believes that the country’s youth are driving Bolivia’s consciousness, so the country must invest in them to ensure a future for its jaguars.

But the scale of the wildlife-trafficking in Bolivia makes it hard for Ossio to be an optimist. ‘Hopefully we will disappear and give the animals a chance,’ she says. Bolivia’s jaguars need to be left in peace.