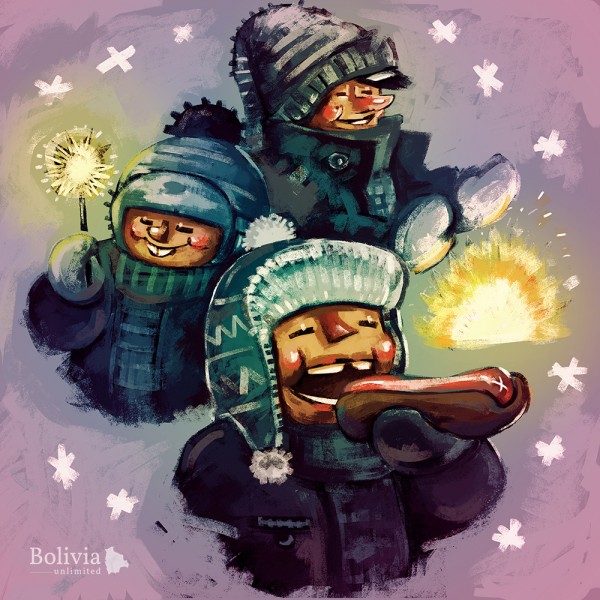 The festival that rose from the ashes

The night is particularly freezing, but I wouldn’t advise you start a fire to warm up. On a night like this, a 24th of June, you risk a fine of almost 200 bolivianos (about $30) if you try to light even a little flame or firework. With more than a 1,000 police officers in la Paz enforcing this law, it’s simply not worth the risk.

The government of La Paz has implemented such strict legislation due to the famous customs of the San Juan celebration. Traditionally, families and neighbours gathered around big fires in which they burnt old furniture and any objects that belonged to the past or represented evil memories. Other than warming people up on what is considered to be the coldest night of the year, the fires served the alternative purpose of exorcising negative events in the past to start a new purified life. Using the fire to their advantage, families also cooked collective meal over the flames served with sucumbé or just straight singani.

Local authorities decided to forbid the fires more than 20 years ago because of the consequences of burning objects such as rubber tires. The fumes from this practice increased  pollution in the city, which posed health risks for paceños, increased fire hazards, and disrespected Pachamama’s right to enjoy uncontaminated air, as states in article 7 of Bolivia’s Law of the Rights of Mother Earth.

The fires have stopped as a result of the law, but did the San Juan festival disappear also? Thanks to the local company Stege, the celebration has continued. Instead of gathering around fires, people now meet and enjoy food around… barbecues and hot-dogs! Stege was the first company to introduce sausages to San Juan, given its expertise preparing sausages for the German embassy in La Paz. Stege began marketing its products nationwide for the 24 June celebration and decided to take advantage of the fortune-reading tradition of San Juan to promote the brand, adding lucky charms or amulets to their sausage packs. The new tradition has continued and the offers vary every year, featuring different kinds of bread, sauces and sausages. Every region of Bolivia has its own way of preparing hot dogs using traditional ingredients.

So, in 2018, people are gathering around barbecues. Their grandparents were lighting fires. But when did San Juan start and why?

The fires have stopped as a result of the law, but did the San Juan festival disappear also?

In the Andes, the Incas were already celebrating this special night as the starting point of a new year. However, it had a different name: Inti Raymi, which means ‘Sun festival’ in Quechua. The Incas honoured the rebirth of the sun and  ate uncooked corn and vegetables in order to purify themselves. The feast was maintained after the Spanish colonisation, but acquired another religious meaning. According to the bible, the prophet Zacarias lit a fire on the night of the 24 June to announce the birth of his son: Juan Bautista, making him perhaps the only saint to have had a commemorative day of his birth and not of when he died.

But this is not the only strange fact about San Juan. After reading my future in eggs, beer and melted tin (which is a local tradition), a yatiri explained to me the many beliefs that have emerged from San Juan along the years. When fires were still allowed at the festival, she said, it was common to start them in areas where people wanted the soil to be fertile. It was also the tradition at the time for people to walk across hot coals in order to show to the spirits they were unafraid. The majority of people did this fire-walk at midnight because the legend assured that your feet would not be burned at this time. Then, on the next day, people used to read their fortune for the next year in the ashes.

According to the yatiri one should refrain from sleeping on the night of San Juan to avoid being  tired for the rest of the year, but also reduce the risk being woken up with a water splash on the face. It is common for those who wake up first in a house to throw water on those that are still sleeping that day. Some even throw water on their neighbours! Others take a cold back at 4am to maintain their youth, or look out the window in search for the love of their life.

In the Andes, the Incas were already celebrating this special night. However, it had a different name: Inti Raymi, which means ‘Sun festival’ in Quechua.

The rituals and traditions of San Juan have changed over time, but one thing that is clear: it is still a festival at the beating heart of La Paz and of Bolivian life.