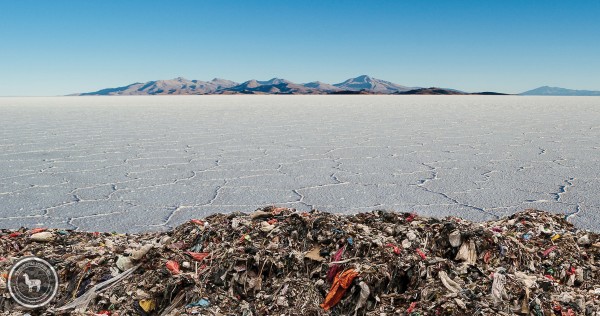 ‘Close your eyes if you see any rubbish; we are really trying to work on it,’ pleads our tour guide with an embarrassed smile as the jeep trundles out of Uyuni, the gateway town for backpackers touring the the world’s largest salt flat. Metres from where tourists clamber over the rusting skeletons of locomotives in el cementerio de trenes, resting near Bolivia’s famous salar, a less aesthetically endearing vision of abandonment colours the landscape. Litter itches at the smoothness of the horizon, containing within it waves of household waste – orange peels, used nappies, car tyres, and a jungle of multicoloured plastic bags snagged against the charred desert weeds.

This vision is what 30-year-old international developer and environmentalist Yoshi Homna was greeted with increasingly regularly during his seven years as a tour guide of Bolivia's Salar de Uyuni. The rubbish, which is beginning to overshadow this ‘magical place’, prompted him to seek a revolutionary solution.

Attracting 1.2 million tourists each year, the salar has become one of Latin America’s most popular tourist destinations, and has been recognized as one of the world’s best photo opportunities. But a scourge of rubbish is a reality in some communities near the salt flats, a vision that contradicts the flood of photos on Instagram capturing the salar’s surreal expanse of shocking whiteness. In these images, every shard of salt defensively reflects the sun's piercing gaze back into the thin atmosphere, generating photos of phantasmagorical beauty. This relationship, that of el sol y la sal, is in fact what Yoshi is harnessing to solve the problem of waste near the salar.

According to Yoshi, the salar is not only threatened by the thousands of tourists that visit it, or even the Dakar Rally that rips through the landscape every year, but also from the inefficient waste-management system of Uyuni itself. The harshly remote city’s 10,460 inhabitants bury most of their waste underground, posing another biting problem for the surrounding environment and the salar’s remarkable beauty.

This accumulation of garbage prompted the creation of Yoshi’s autosustentable Project YOSI, in which solar energy will be used to convert waste plastic into petroleum fuel. Currently in storage in a lab at the Universidad Mayor de San Andrés (UMSA) in La Paz, the project’s machinery will heat plastic refuse into gas form, purify it, before cooling and condensing it into a liquid fuel.

The programme, Yoshi explains, will not only dispose of waste, but also generate electricity for local communities. Due to an unreliable electrical network and the dominance of large hotels that tax the system, locals frequently experience power shortages. Soon, with the project’s cutting-edge technology, residents will be able to turn their basura into la luz. Depending on how talks with the Bolivian government progress, Yoshi predicts that the project will be up and running by the end of the year. He hopes that this example of sustainability can be replicated elsewhere: ‘I dream of expanding this ethos of sustainability outwards, from the heart of the salar across the entire country.’

For the locals who live in Uyuni, the popularity of Yoshi’s sustainable venture is burgeoning. Sandra Pari, owner of Full Tours G&M, noted how the lack of waste disposal vehicles renders the tarred streets a jackpot for scavenging dogs, whilst agrónomo Marcelino Mamani Mamani reflected on how the notoriety of Uyuni’s litter is detrimental to its natural surroundings and to its image as a town. Both welcome Project YOSI with open arms, regarding it as hope for the future of Uyuni and the truly fascinating environment of the salar.