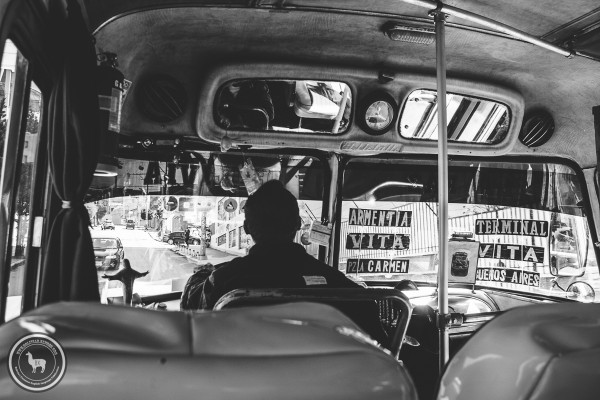 On the streets of La Paz, vehicles large and small breeze about. Speedy taxis pass cars whenever possible, honking at anyone that might block their path; minibuses crawl down the avenues, their colorful letreros, or signs, declaring their destinations; and slow, lumbering tourist buses and commercial trucks dare the steep passes of the city. But perhaps one of the most memorable vehicular sights in La Paz are the micros, colourful school buses providing cheap transport for the urban masses.

Dressed in different shades of red, green, yellow and blue, the buses are decorated with brightly painted model names and shiny ornaments, either stock or personally adorned. The micros of Línea 2, which have been running from Sopocachi to the bus terminal in Zona Challapampa since 1938, can be found in various hues of dark and light blue.

The inception of the line began with the move away from the city’s old tranvías, or trolleys. From that time, Línea 2 has grown to 120 drivers strong, working 365 days a year. Línea 2 grew into the union known today as the Sindicato Eduardo Avaroa, which currently runs 19 lines in La Paz.

The sector chief of Línea 2, Nilo Linares, says that his drivers are also accomplished mechanics, allowing them to fix whatever issue the difficult roads of La Paz bring to their vehicles. Showing the extent of the changes the buses have had to undergo to survive, Linares said, ‘All of this’ – pointing at the body of the vehicle – ‘this, and nothing else [has stayed the same]’. He continued, emphasising, ‘The engine, the internal gears, the brakes, the transmission – all of this has been changed.’

Linares states that a new Dodge, Ford or Chevrolet bus of the type they use costs between $80,000 to $89,000. ‘We can’t pay that with the fares we charge,’ he says, which come out to about 30 US cents per customer. Instead, Linares says the drivers will buy the necessary parts and fix whatever breaks down on their vehicles, some which have been running for 45 years. He explained they service their approximately 65 buses weekly, and have been doing so for the past 78 years. The people of La Paz rely on these buses for work and city travel; the drivers know this and work to make sure they are always ready and running.

The blue micros of Línea 2 are a fixture of life in La Paz, and are emblematic of the colourful, resilient nature of Bolivia. Through tough road conditions, traffic congestion and vehicle frailty, it is clear that it is the spirit and ingenuity of these drivers that sustain these buses on their long journeys home.