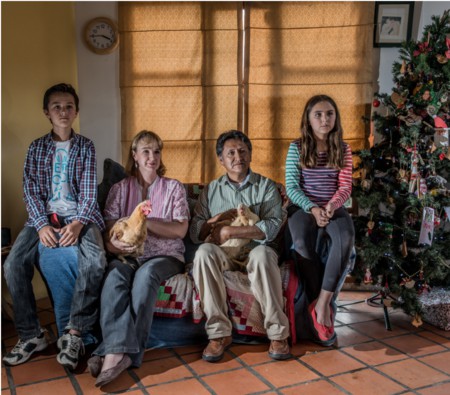 The Mendoza-Donlan family explain what it is like to keep chickens as pets.

They were a Christmas present for our children, we bought five chicks. We were told white chickens are reared for their meat, whereas ours were egg-laying hens.
A dog got the twins Gumble and Dinky (RIP) when they were chicks. Gumble had an afro. We gave them a good burial on the land at the bottom of the garden. We were left with three: Queen Victoria, Vanilla and Miss Money Penny. Victoria recently left us. We’re going to miss her. She was the head hen, she would boss the other two around.
We didn’t know how to look after hens. We didn’t raise them like hens, we raised them like kittens. They would sit on our laps and we would stroke them. They are so tame; they don’t know they are hens.
When we get back home they run to the door like dogs (or velociraptors) to come and greet us. They are curious and they love to watch television. I would come into the living room sometimes and find one perched on the sofa watching TV. Another time I walked into the bedroom to find one sitting on the bed. Now they live outside with our three dogs. They get along just fine.
When they were still quite small I took my friend out to meet the chickens in their coop. And all of a sudden I noticed the diamond out of my engagement ring had gone. You know, they are attracted to glittery things. And then what do we do? This whole debate, do we kill them? It could have been Queen Victoria or Miss Money Penny. We spent days looking for it in their poop. A friend suggested it may have ended up in their gullet. There is only one way to be sure, he said. But at that point we made a big life decision to not kill them—even if they have swallowed a diamond.