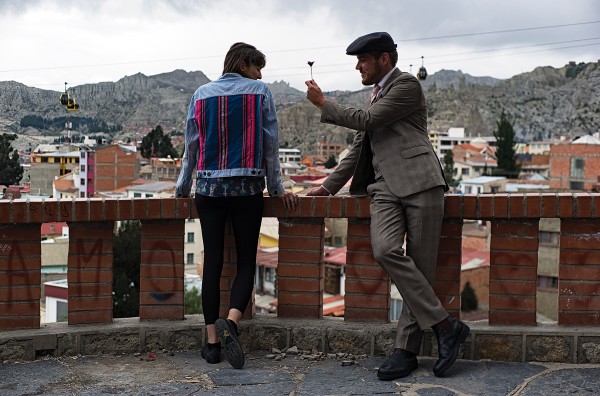 “I don’t believe in magic “

“You will, when you see her”

One time the old man said:

“The truth is I don’t understand you young people and the way you handle relationships. Back in my day – in the 80s, I mean – it was hard enough just to meet a girl you wanted to go out with. There were no smartphones, no emails, never mind Facebook or other social networks. I had to wait anxiously for her home phone to ring off the hook and hope she was the one to answer. If anyone else answered, I would hang up immediately, which was tiresome as I’d have to try again later. I would take the number 2 bus from Sopocachi to reach Calle Indaburo near Jaén, a very traditional area of La Paz where my current wife used to live. She was from a conservative family. As you can imagine, she had to make stealthy escapes via the balcony of her house so we could see each other. Obviously, her parents did not agree with our relationship. I was an “experienced 25-year-old boy,” as they saw it. I had left the family nest at age 17 to start working and studying so I could be independent as early as possible. She, on the other hand, even at 21, had to be home by eight o’clock in the evening, escorted by a “gentleman” from her social circle.

“Bolivia back then was going through one of the worst economic crises Latin America has ever seen. Since Hernán Siles Suazo took power in the midst of a series of different governments and dictatorships, annual inflation had risen to 200%. It was an unsustainable situation for a young man like me who had to care for himself. I had to make one of the most drastic decisions of my life: I moved to London, England, where I could save every penny I earned, motivated by the fact that it was the only way I could have a future with her.

“I remember those days at Gordon´s Wine Bar on Villiers Street, the pub I managed to get work in, listening repeatedly to A Forest by The Cure and taking a cheeky 30 minutes every day to write letters about my days in that city. I’d send them by post and wait desperately for about three weeks for a reply. The mental effort to avoid thinking she had forgotten me and was with someone else was truly exhausting. Can you imagine how difficult it was? A relationship between two people was certainly very difficult to sustain..

“Near or far from that person, it didn’t matter. My life and the lives of most people of my generation were geared around being in a relationship. Conventional marriages were idealised.

“Nowadays you lot just live relationships through “long-distance Whatsapps” and all I see are casual relationships everywhere, based on any old thing, whilst fewer relationships are founded on true love.”

“Sir, I understand exactly what you’re saying. That kind of romanticism worthy of a novel by Gabriel García Márquez just doesn’t exist anymore. It has disappeared entirely. However, you should know that today I spent four hours at my university where I should have been paying attention to an economics class, and then a marketing one, but my head was exploding as I tried to write the right Whatsapp message to her. Just a little written message, that could be interpreted in thousands of ways and would maybe say what I didn’t want it to, leading to a fight with someone I love and a sleepless night. The other day as I was scrolling down Facebook on my smartphone, I read an almost anonymous post that in my opinion aptly described how we are the fearful generation. This generation was born just to hide behind the image we want to portray in our social network profiles. You, sir, think they help our relationships but let me tell you, it’s quite the opposite.

“I think the ease we have now in responding to a “romantic” message in a millisecond has become a mental effort – an even bigger and more exhausting one. What song should I share with her? Should I reply straight away or wait 10 minutes? No, if I reply now I lose. Has she read my status? She hasn’t been online for more than 2 hours. Is she with someone else? If she sees I’ve seen the message she’ll think I’m angry. It’s 3 in the morning and we can’t stop sending voice messages!

“You should understand, sir, so many social connotations come with this huge range of communicative devices that overwhelm our relationships. Don’t get me wrong, I mean, I’d honestly do anything for her. It is a genuine feeling. I just won’t say it through a tune by The Cure. Instead, I might send her the new crappy Justin Bieber song.”

The old man was thoughtful.