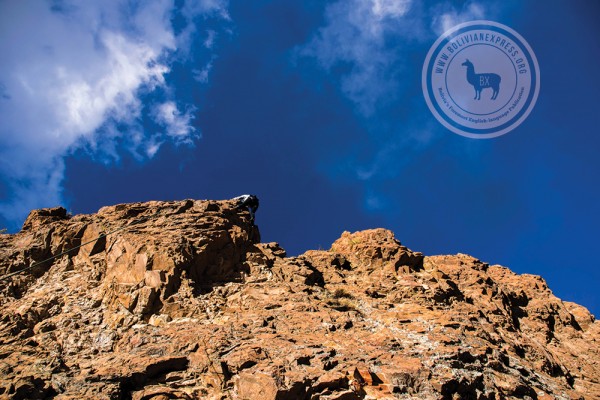 An uncommon sport high up in the Altiplano

On a chilly Sunday morning, we set off down a valley next to a spa near Llallagua, a town between Oruro and Potosí, to meet the climbers. Outcrops of rock rise up out of the landscape, with silhouettes clambering over them. A small group of people cluster around a promontory, looking up and waiting to start their ascent.

The small mining town of Llallagua has a very strange atmosphere, sharing remarkable similarities with Soviet-era towns. Its squares are dedicated to revolutionary miners, with statues depicting them alternatively holding rifles or hammers and sickles. Yet El Tío, the lord of the underground, is regularly left offerings to safeguard the wellbeing of the miners. Rusted infrastructure lies scattered around, and the valleys that surround the town feel more like walls keeping the townspeople in. However, we are here to visit Llallagua’s small community of rock climbers.

Climbing is an emergent sport in Bolivia, with indoor climbing gyms in many of its cities and countless sites throughout the country’s share of the Andes. However, as one of Llallagua’s climbers puts it, ‘There are lots of places to climb, but there aren’t many climbers.’

‘There are lots of places to climb, but there aren’t many climbers.’

In 2008, a Belgian climber Niels Jespers arrived in Llallagua to work for an NGO. While there, he noticed a series of rocky outcrops—made of a rock called Chiquitito Picante by the locals—that looked perfect for rock climbing. The work took Niels elsewhere, but in 2013 he and eight other climbers returned and set out to create a school for climbing in Llallagua, called Arriba Bolivia. For five weeks, they taught locals advanced climbing techniques, including the use of harnesses and belay devices.

‘It was about Llallaguans getting to know their own environment,’ Niels said. Indeed, in a documentary about his project, many citizens of Llallagua spoke of how they considered their mountainous environment purely as scenery before learning to climb.

Niels’ goal was to create an independent and self-sufficient group of climbers. ‘We don’t want 100 people to climb just once,’ he said. ‘Rather, we need a few people who can climb independently.’ The objective was that when the folks from Arriba Bolivia left, the climbing community in Llallagua could continue without them.

Today, it appears that Niels was successful. There are now ten active climbers in Llallagua. César Alejandro, the leader of the climbing community and a professor at the local university, has been here since the beginning. Rubén Quispe learned to climb during his period of compulsory military service, and Sergio Nina and Tania Maribel Porco Calizaya, César’s students, started climbing last year.

My guide for the town, Eduardo, and I, as well as Eduardo’s girlfriend Jazmín, decide to join them in their climbing.

The group decides that a route named Goollie would be the best place to start, and we begin to climb. Six metres up, I realise that my Converse shoes aren’t suitable for climbing, and after I fall I’m handed a worn pair of climbing shoes. This time I make it to the top.

Stopping to rest, I get the chance to observe the group’s dynamics. There’s a sense of camaraderie, with banter flowing easily. Someone brought their small dog, who excitedly runs up and down the ridges.

Sergio, 23, who studies civil engineering at Llallagua’s university, tells me why he loves the sport: ‘I love to climb a lot. I want to stay here... it’s always a little difficult for me, but this is what I love—the difficulty.’

Tania, 21 and an accounting student, started climbing out of curiosity, but now climbs regularly. ‘Everything is beautiful,’ she says, ‘even though it makes me afraid.’

Sergio feels the same. ‘When I find a new route,’ he says, ‘it makes me afraid, and each day is a challenge. I love each one, and I don’t leave here without finishing what I’ve come to accomplish.’ Another challenge that both Sergio and César mention is the unending quest for climbing equipment. ‘I need more money for equipment,’ Sergio says. César concurs: ‘We are missing equipment and money. Now we only a have the little equipment that we have bought, and we practice with this.’

‘Everything is beautiful, even though it makes me afraid.’
—Tania Maribel Porco Calizaya

By now, the sky has grown dark and it is time to return to La Paz. This little band of climbers starts to pack up as final routes are climbed and last photos taken. As we bid farewell, I leave fully confident that this unlikely community will continue to thrive up there in Llallagua.