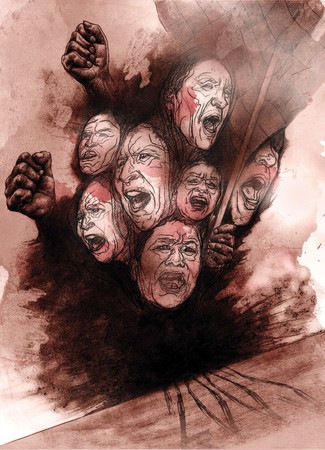 The 10-year anniversary for Octubre Negro has recently passed—a dark mark reminding Bolivians that standing up for yourself can lead to great sacrifices. Talking to a journalist, a political analyst and an activist, I try to get closer to whether the revolutionary spirit is still alive in the mind of the everyday Bolivian.

Timeline:
April 2000: La Guerra del Agua in Cochabamba. Protests against the privatisation of the water supply.
June 2002: Gonzalo Sánchez de Lozada (Goni) is elected president.
February 2003: Protests in La Paz against plans to increase taxes.
September 2003: Protests about gas start in Warisata and move on to El Alto. Roadblocks lead to violent confrontations with the military and police.
12th October, 2003: The ‘Death Convoy’—military and police escort gasoline trucks as roadblocks continue. This leads to many people getting shot, becoming the bloodiest day of protests.
13th October, 2003: The government suspends the gas project. A number of political leaders—including Vice President Carlos Mesa—withdraw their support for the government.
17th October, 2003: The president resigns. The people have officially toppled over the government. Carlos Mesa assumes the presidency and promises a referendum on the gas question.
July 18th, 2004: Carlos Mesa puts the question of nationalisation of gas to referendum.
May 6th, 2005: A law is passed by Congress which only partially nationalises the gas reserves.
May 2005: New protests break out, demanding full nationalisation of the gas reserves.
6th June, 2005: Carlos Mesa resigns as he is unable to please the request for nationalisation.
22nd December, 2005: Evo Morales is elected president.

What Was It All About?
The dangerous cocktail of corruption, oppression and highly irresponsible politicians was bubbling viciously under the surface of the Bolivian society for years. While being right on the edge of erupting like a dormant volcano for a long time, it all culminated in October of 2003 when the people finally took action. In the midst of a financial crisis, the question on how to handle the natural gas resources spurred the people to take responsibility for their future. 2013 marks the tenth anniversary of the protests that ended in the Bolivian people toppling over a government and causing not only one, but two, presidents to resign.

Throughout Bolivian history, hydrocarbon reserves have fluctuated between being in private hands and state-owned. Before the violent uprising of 2003 the reserves were privatised, and many Bolivians didn’t feel they benefited enough from what naturally belonged to them.

This key issue, together with the frustration over corruption and economic crisis, all came to its high point in October 2003, when protesters in El Alto charged to the streets demanding a radical change. Unfortunately, under the neo-liberal government of the time, nationalising the gas reserves would have meant going against their own principles.


The protests spiralled into surprising levels of violence, escalating into something no one had ever imagined. A series of events throughout October meant that by the 17th, when the president was forced to resign, up to 70 people had been killed and hundreds more had been injured. The people managed to overthrow two presidents before socialist Evo Morales was elected in 2005. During his first administration in 2006 he did what many Bolivians had dreamed for a long time, and which they were told time and time again would be impossible—he nationalised Bolivia’s natural gas reserves.

Changing Society
With a history of turbulent political grounds, Bolivia has only recently experienced economic growth. When it comes to the question of natural resources, Bolivia certainly hasn’t enjoyed much luck during its history. Instead it has watched powerlessly while valuable resources such as silver, rubber, guano, and tin have been exploited by other countries and private commercial interests. The country has been held back in its quest for development and greater wealth.

Switching between a privatisation and a nationalisation of the gas resources has, according to journalist and political analyst Fernando Molina, massively slowed down the development of Bolivia’s economy. ‘The government only had repression to face the problem. They ended up killing many people and prompting a strong popular reaction. At the end they were in a very tough situation’, Molina says. He adds that there has never been much trust in politicians as corruption has been going on for a long time. Recovering faith in politicians is not an easy task, he tells me.

Talking to Tony Lopez, who participated in the protests, it’s clear that there is a certain grudge towards the way society changed. ‘In reality, the situation of every Bolivian is worse because poverty is growing’, Lopez explains. According to Lopez, the only development in the country is for the new elites: drug dealers, cocaine producers, miners and political leaders, who belong to the official party—and not for the everyday Bolivian.

Corruption is still prevalent, even after the 2003 protests, Lopez tells me. The difference, he says, is that it today is hidden behind a mask. ‘Before, people just minded their own business’, he continues, ‘maybe social control has been corrupt since that time. If you denounce anything, most of the social space where you would do so belongs to the government’.

Boris Miranda, who authored a book about the gas protests, La Última Tarde del Adiós, has a slightly more positive perspective. ‘People have been able to get the confirmation that a social movement can bring down a government’, he says. ‘They confirmed that the rational way of thinking is not always the best and that politicians aren’t always truthful.’

The Spirit of the 10th Anniversary
During October this year, I switched on the television numerous times to discover that La Guerra Del Gas, as it is so commonly referred to, was being discussed. I thought that there might have been some sort of blend of a memorial and a celebration to commemorate the anniversary. But this seemed not to be the case. Molina, Miranda and Lopez all tell me how the government is using the protests and the development since then for its own political advantage.

‘The government has tried to gain a political profit from it, but the social movements don’t recognise them as “the fathers” of what happened in 2003. They are neither heroes nor authors of the protests’, Miranda explains. ‘Evo Morales and his men weren’t in the country at the time of the protests, but they were able to capitalise upon what has happened there and bring it into a political space’.

To me, it all seems slightly strange. In my head, people need a certain amount of trust in the government in order to make society work. It is very understandable that the Bolivian people are sceptical and keep a close eye on politics. Take a look at the country’s very recent turbulent political history and you’ll understand why. Still, according to Lopez, El Alto, which was the centre of the protests, has experienced no useful change. Instead of El Alto being a democracy, he describes it as more of a syndicalist dictatorship. When I ask what he thinks it will take to turn that around he merely laughs discouragingly. ‘No sé’, he says.

Ten years on, Lopez is sure of this: El Alto has taken the credit for what happened. There were other events leading up to La Guerra del Gas, such as La Guerra del Agua in Cochabamba in 2000, but the protests of 2003 became the pinnacle of frustration, and remains the centre of attention.

A lot can happen in ten years. It often doesn’t take long for people to forget. But La Guerra del Gas remains an important event in the minds of the Bolivian people. They toppled over a government, and that should not be easily forgotten.

What is, to me, more interesting, though, is if they still possess the revolutionary spirit. As mentioned before, Bolivians are very much sceptical when it comes to politicians and their proposals, but would they actually get up and protest again if the circumstances demanded them to do so?

Molina explains how it has been very beneficial for Bolivians to be revolutionary, but how it is also an obstacle for development. ‘We are trapped in this spirit. It’s a kind of evil spirit. We need new wars’, Molina says. ‘It’s about what we can do together. Working, creating jobs, opportunities and businesses. That’s the engine of the country. I think a good way to go is to make a moderate change.’

Miranda doesn’t doubt that a part of the revolutionary spirit is still alive. ‘The social forces in Bolivia are always looking at what’s happening and they are going to take action when necessary.’

It seems that this is an uncertain topic. While agreeing on the fact that the revolutionary spirit is continuously present, the possibility of another uprising doesn’t seem to please all parties. Like Molina, Lopez also thinks it could be an obstacle for development. He is more focused on El Alto, whose network of syndicates, along with corruption, stand in the way of development. ‘If you’ve got something that gets on your nerves, you go to a syndicate and say, “I want to block a street”, and it’s blocked. The corruption has entered the syndicates.’

What Comes Next?
People are still sceptical, especially when it comes to the gas question. Having shifted between privatisation and nationalisation, Molina is pretty sure that a future privatisation is not out of the question.

One thing is certain at the moment, though: Bolivia’s political scene isn’t squeaky clean. While the upcoming election gives way for exploiting La Guerra del Gas for personal political advantage, the development of the Bolivian society hasn’t gone in the direction many people want. Corruption still exists. Maybe it’s good that the revolutionary spirit still remains, and maybe Molina and Lopez are correct about the revolutionary spirit slowing down the country’s development.

The seeds of the Bolivian revolutionary spirit leads back to the first indigenous uprisings during the Spanish conquest, eventually leading to the country’s independence. This spirit has remained dormant over the centuries, erupting at key moments in Bolivian history. Having undergone some of its most important transformations over the past 10 years, Bolivia is currently seeing daily protests over anything and everything. The social movement has lost it’s edge through sheer repetition. Through the participation of middle classes in key protests (for example, against the construction of a motorway through the TIPNIS in the northeast of the country), revolutionary methods have become domesticated. With Evo Morales’s rise to power with the MAS, it would appear the party of social movements is now governing the country. Still, there’s something dodgy about the idea of a social movement becoming institutionalised. It seems the next generations will need to find new ways to reinvent the revolutionary spirit in order for it to live on.