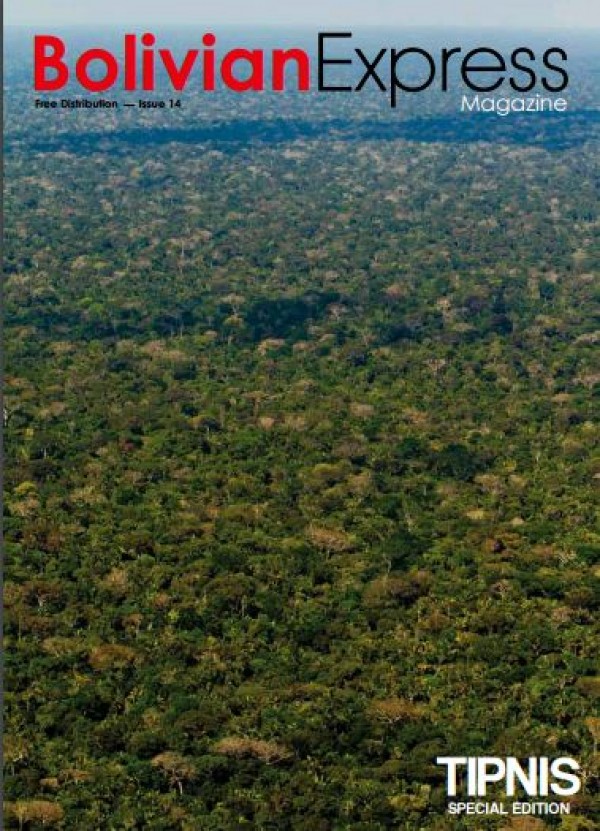 A game-changing law that endangers the park

Back in 2011, we printed a special edition themed around the TIPNIS, which stands for the Isiboro Sécure National Park and Indigenous Territory. We looked into the culture of protest in Bolivia, and tried to understand what this fight meant for the country’s future and how the TIPNIS became a symbol of identity for many Bolivians. Following a 40-day march led by indigenous organisations, on 24 October 2011 the government passed a law declaring the intangibility of TIPNIS. We are now revisiting the topic in light of a recent development. On 13 August 2017, the government passed Law 969, which cancels Law 180 and with it, the ‘intangibility’ of the national park.

Six years ago, swathes of marching feet swarmed into La Paz in a wave of protest, after walking over the soil that covers most of Bolivia: from the harsh altiplano of the highlands, to the damp earth of the lowlands. The march emerged in response to the government’s decision to build a highway through TIPNIS, home to almost 70 different indigenous communities and to one of the highest densities of biodiversity in the world.

Back then, TIPNIS was used as a springboard for multiple converging, contrasting and often colliding objectives. The debate augmented into something greater than extractivism against environmentalism, or infrastructure against indigenous rights. It snowballed into the culture of protest inherent in Bolivian society, a culture that uses strikes and marches as a form of democracy.

TIPNIS emerged to become a question of identity, of self-determination, of the very essence of citizenship in a nation that claims to embody a multicultural, plurinational ethos. Although president Evo Morales argued he was ‘working for the dignity of all’, this was seen to dissolve into ‘working for the dignity of some’. Eventually, facing both national and international pressure, the government withdrew its plans. This year, the plans have been officially revived, and the construction of the road is expected to continue.

So, what has changed?

Pablo Villegas, investigator at Centro de Documentación e Información Bolivia, is not surprised by the latest developments. He sees it as a logical step of the ‘progressive extractivism’ policy articulated by the government. According to Villegas, the recent reversal regarding TIPNIS, is in line with the Coca law of 13 March 2017, which increased the cultivation area of the leaf from 12,000 to 22,ooo hectares. For better or for worse, Villegas sees a larger pattern and a planned policy to integrate Bolivia with the South American continent through the extraction of the country’s natural resources.

‘There can’t be an intangible territory...We can’t live from subsistence anymore.’

The road, which will link Villa Tunari in the department of Cochabamba to San Ignacio de Moxos in the Beni, is meant to support the development of the area. Indigenous communities living in the park will benefit from the construction of schools and hospitals and will gain access to basic services. Some indigenous leaders argue that the notion of ‘intangibility’ has become more of a barrier to the economic and social growth of indigenous people, than a concept that protects them. Pedro Vare, the recently elected president of CIDOB (Confederación de Pueblos Indígenas de Bolivia), denies that the fight was ever about making the park intangible. ‘There can’t be an intangible territory,’ he says. ‘We are human beings, we have fundamental rights. We have a right to develop in a productive way. We can’t live from subsistence anymore.’

His call for development and his acceptance of the road ring hollow, but show how much things have changed in only six years. Back in 2011, Vare and CIDOB were at the forefront of the TIPNIS march. According to Norka Paz, an environmental activist, their change in position is the result of the ‘progressive weakening of indigenous organizations that has occurred due to oppression, repression and monetary incentives.’

The reality is that several stakeholders would benefit from the TIPNIS road and the extraction of the park’s resources. The road would benefit the cocaleros in Polygon 7, an area in the south of TIPNIS that was delimited in 1992, when colonisers from the highlands flooded the region. In their search for work, these migrants started planting coca, leading to the deforestation of 60% of the area. The growth of the crop raises fears regarding narco trafficking in the park. Between 2015 and 2016, the cultivation of illegal coca increased by 150% in Bolivia, according to the UN office on Drugs and Crime.

Another suggested motive for the road’s construction is the discovery of hydrocarbon banks in the TIPNIS. Since Morales’ election, gas and oil contracts have been renegotiated through nationalisation and foreign investments. According to the Centro de Estudios para el Desarrollo Laboral y Agrario, based in La Paz, one third of the park has been marked for natural gas extraction. Ganaderos, madereros, soyeros would also gain easier access to the park and could start cutting, planting and colonising the park.

The planting of soy crops in particular, could prove advantageous to Brazilian interests. With a road through Bolivia, linking the Pacific and Atlantic oceans, Brazilian soy planters could access Asian markets significantly faster and cheaper. ‘Instead of the 26 to 30 days it currently takes them to reach Asia, through Bolivia it would take 5 days,’ says Pablo Villegas, while pointing at the shortcut on a map.

Fifty percent of the communities in the park are too far from the road to benefit from it.

Even if Bolivia has a lot to gain economically and politically from integrating within the continent, it is not clear how the incursion into the park will benefit local indigenous populations. After laying a large map of the TIPNIS on the table in front of us, Villegas and Norka Paz sketch the planned construction route with a marker. As Villegas points out 50% of the communities in the area are too far from the road to benefit from it. ‘For electricity, you need cables,’ he says, ‘not a road.’

More than the construction of the highway - which is already underway - Paz and Villegas fear that Law 969 will open the park to all sorts of private endeavours. Article 9 of the law mentions the ‘opening of roads, highways, fluvial and aerial navigation systems, and others.’ Article 10 goes even further, inviting privados to ‘exploit natural renewable resources’ and to develop ‘productive activities.’

To activists such as Paz and Villegas, this reads like an environmental and social disaster. The inhabitants of the park are concerned that the territory will be colonised by cocaleros and highland farmers. Although the law forbids the illegal settling of colones and states that local populations and the environment will be respected in future projects, earlier this year, a meeting held by the communities of TIPNIS resulted in the rejection of the law.

Because of the highly politicised tone of the debate and the range of interests at hand, one aspect of the TIPNIS dilemma has been continually marginalised. TIPNIS is home to an uncountable number of species, many of which are endemic. Paz and Villegas suggest that if the plans move forward, in around 20 years the area could be subject to up to 70% deforestation, which would be catastrophic for the environment.

‘There could be another march,’ Paz says, who remains vague yet positive about the future of the park. According to her, international attention will be key if the road is to be stopped and environmental measures are to be taken seriously. In Villegas’s view, the people of TIPNIS have practically become ‘prisoners in their own land’, caught in layers of corruption, mismanagement, and bureaucracy.

As Paz acknowledges, the issue is much larger than the construction of a road in the jungle. ‘This is happening all over Latin America and the world,’ she says. Transcending political tendencies, economic impulses are pushing for a globalised and integrated economy. For now, those paying the price are the forests and the communities that live and depend on them.

Brasil, Peru, Paraguay, Uruguay and Bolivia will meet this year in the city of Cochabamba to discuss the plans for the Bioceanic Train, a future railway that will link the Atlantic and the Pacific oceans. Integration seems inevitable. Roads will most likely be built in the TIPNIS and across Bolivia. But perhaps the continent could integrate around a respect for the environment and its inhabitants, leaving behind its past of extractivism and colonisation. After all, that’s what President Morales promised when he pledged to the idea of Suma Qamaña: the notion of living in harmony.