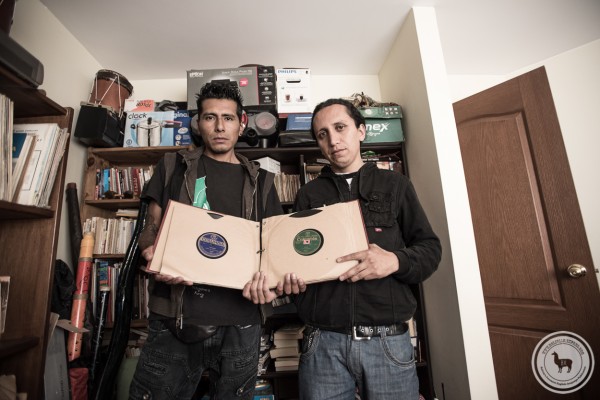 Many aspects of life have been lost to history's clutches. There are arts, people, and even whole cities that are forgotten because of time’s relentless passing. Music is one of the most common things that has surrendered to the passing of generations; whether they were not released, mindlessly left unrecorded or only played so that few people would hear, countless pieces of music have been abandoned.

Fernando Hurtado Valdivia and Isaac Rivera Cuevas, two men in their 30s from the Miraflores neighbourhood of La Paz, have done their best to change the fate of some of this lost music. These paceños have been friends since childhood and share a passion for the art of music. Their project, Ajayus de Antaño, or ‘Spirits of Yore’, has become well known throughout the city for the preservation of countless records from Bolivia’s musical past, going back to the 1910s. Their selection of vinyl recordings run the gamut from Bolivian foxtrots and popular orchestral pieces to songs celebrating La Paz's star football clubs, The Strongest and Bolívar.

We sat down at the computer as Fernando set up his new turntable, from which he transfers the music into a digital recording. The first few seconds were simply just crackling from the needle, the new technology not affecting the antique sound of the record. When the music began, it was clearly from an era long before most of us were around. It was a piece from the 1930s, sounding like something that might come out of a saloon. The crackling continued behind the music, which made you want to tap just the one foot; it was something you could listen to while having a relaxing drink in a bar somewhere in a small town on the altiplano. If any music needed to be immortalised, this was most certainly it.

‘We came across these two guys who had a bunch of vinyl with them in the street. . . They had their record player and a speaker on a little table, and they sold us some of the discs they had.’
– Isaac Rivera Cuevas

‘I wasn't all that interested in Bolivian music at first. It was just a little too weird for me,’ says Isaac. 'I like metal a lot, from Norway and Finland, a lot of the heavy music that comes out of Northern Europe, especially because they sing about their own traditions. They have pagan traditions, and there's a lot of folkloric metal, and for me the fusion of the two is really cool.’ It was from this starting point that Isaac thought to explore the folkloric traditions of Bolivia. Since then, he and Fernando have delved into a variety of bands and singers from across the Andes. Today, their collection is extensive, and vinyl discs fill the bookcases in a small room of Fernando’s Miraflores apartment. The records are from labels like Columbia, Mendez, and Victor, the latter also being the company that made the original turntable that the pair own.

Both Fernando and Isaac found their passion for music in similar ways. Fernando’s aunts influenced his love for rock music when he was just 11, giving him a mixtape full of Pink Floyd, Led Zeppelin, and the like. Isaac remembers a specific moment when his love for music started: 'I went to this underground concert at the Casa de la Cultura, and I was quite nervous because there were all these mad rockers around me and I was just standing there, this 10-year-old, terrified. When I was 17, I really got into it, buying myself black clothing and band T-shirts.’ Their mutual devotion to music led them to become impromptu collectors.

'We came across these two guys who had a bunch of vinyl with them in the street,’ Isaac says. ‘They were older men. They had their record player and a speaker on a little table, and they sold us some. We'd record the music from the vinyl onto cassettes in those days. We managed to put together a pretty good collection of vinyl from those two.’ They began collecting music in 2001, and by 2011 they had hundreds of records from many different sources, ranging from Bolivian fusion to international music, all played at 78 rpm. They went to music shops, hidden nooks and crannies, and even to people’s homes to buy the records.

By the time 2012 rolled around, the two began to digitalise their new collection, but not before running over some road bumps. 'It was difficult to digitalise them at first because the discs were so fragile; the first few times we tried, the discs broke because they just couldn't handle being played and recorded after years of sitting doing nothing,’ Fernando remarks. 'After a couple of tries it was okay, and we started the process properly.’

Their mission now is to begin elaborating on the history of the music.

They created a Facebook page to spread the word about their project, as well as a blog. Now that most of the digitisation is complete, the pair is working to get the music out to the public. 'After a while, we noticed there wasn't really anywhere in La Paz to save and listen to this sort of music, so we began to upload the digitalised music to YouTube,' says Isaac. Now their channel has over 250 subscribers, and the archive has been featured in the daily paceño newspaper Página Siete.

Their mission now is to begin elaborating on the history of the music for the wider general public, and research has been their task since 2014. Their plan is to write a book to complement their digital collection, a project that they have tirelessly been devoting themselves to. Fernando and Isaac are working on their project with fervour, and are excited to explore, learn, and tell about this music for years to come.

Isaac and Fernando’s project, Ajayus de Antaño 78 RPM Bolivia, has pages on Facebook and Blogspot, as well as a channel on YouTube.