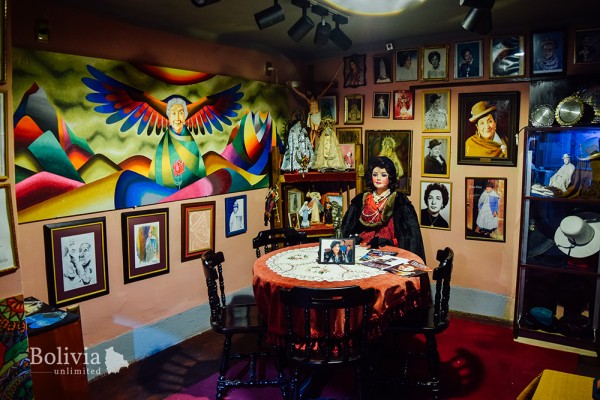 The Arts, Lifestyle and Reviews

A museum on Calle Jaen celebrates the late actress

As I enter the Museo Rosita Ríos on the bright and historic Calle Jaén, warmly greeted by her granddaughter and co-founder of the space, Paola Claure, I am struck by the immediate intimacy and special homeliness of the place. The rose-coloured walls – I am assured that the colour is a complete coincidence – are covered in paintings, photographs and awards belonging to Rosita Ríos Valdivia, the native paceña actress and theatre director who passed away last August at age 83.

Claure tells me that 11 artists have donated work to the museum, with two more submissions on the way. Portraits range from Roberto Mamani Mamani’s ‘Rosita de los Andes’ to a Simpsonised depiction of Ríos as la sanguchera de la esquina, a role she famously portrayed onstage, her performance driving many audience members to tears. However, the museum holds more than just portraits. In one corner lies an elaborate shrine, representing Ríos’s strong devotion to the Catholic faith, while a cabinet holds many of her personal belongings, including a rosary made by her granddaughter and a locket that Ríos had kept beside a sugar sculpture of Mount Illimani to ‘keep life sweet.’ It is no wonder that the space feels personal – the building on iconic Calle Jaén had long been occupied by the actress, with Ríos opening her own corner shop there in 1997.

In addition to the numerous theatrical awards Ríos was awarded with over the years, she also gained recognition for her previous vocation – she worked as a police officer for 24 years before switching careers. She broke into the acting world after coming to the attention of the renowned Bolivian playwright Raúl Salmón. When Ríos was in the police force, she cut through the red tape that was preventing Salmón from getting an ID card, and Salmón asked what he could give her in return. Taking advantage of the opportunity, Ríos asked to visit to Salmón’s theatre. ‘That’s how it started,’ Claure says. Salmón allowed Ríos into one of his rehearsals and she showed promise. This led to her stage debut in September 1971, starring in Salmón’s play Condeuyo, la calle del pecado. ‘Rosa continued working as a police officer for a few more good years whilst in the theatre,’ Claure says, ‘but then she left and dedicated herself only to acting.’ Audiences loved her stage presence, and while drama was her favourite genre, she also enjoyed working in comedies and musicals, followed later by film. 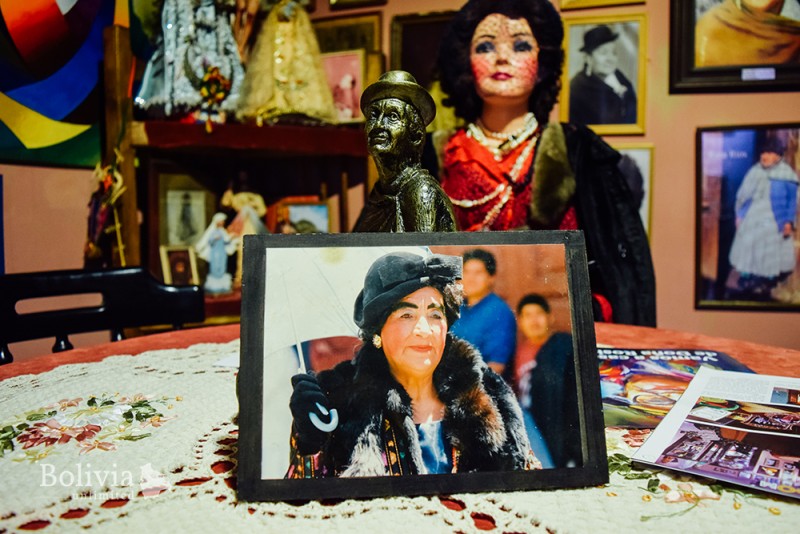 The many characters that Ríos played are prominently displayed in the museum: a mannequin dressed as old Tia Nuñez, a photograph of Ríos dressed the part at the Fiesta del Gran Poder – a visitor feels almost as if they’ve been granted a seat at the table with Ríos herself. A trunk in the museum holds countless colourful mantas and polleras that were worn by the actress during her theatre career and when she danced the morenada at Gran Poder. Claure says that Ríos ‘had a very special affection for the women in pollera,’ and she frequently dressed in the clothes of a chola paceña in her many theatrical productions. Claure says that as the figure of the cholita ‘gained importance and relevance in our city, [Ríos] began to represent the character very well, and was very fond of the character.’ Through her portrayal of the traditional Bolivian woman, Ríos won the hearts of the Bolivian people, whilst her contributions to some of the most prominent Bolivian films of the 20th century, such as Cuestión de fe and American Visa, asserted her popularity.

'Through her portrayal of the traditional Bolivian woman, Ríos won the hearts of the Bolivian people.'

With Ríos’ son, granddaughter, great grandson and even the local neighbourhood dog present, a sense of community pervades the museum; sculptures by her son surround the space, while lively anecdotes told by the animated Claure show that Ríos’s artistic legacy lives on. One such story suggests a reincarnation of sorts: When the museum first opened, a pigeon entered and wandered around the building, finishing with a visit to Ríos’s room. It then walked back down to the end of the street and flew away. This rebirth could make sense, as Claure tells me that Ríos had a great love for animals, even making canine IDs for her dogs.

Ríos’s memory extends far beyond these tribute-filled walls. In December 2017, the muralist Sandro Álvaro Álvarez Huayllas painted a colourful tribute to Ríos on the wall of La Paz’s Max Paredes Library; pictures of the artwork went viral after Ríos passed away last year. Álvarez, one of many paceños to call Ríos a friend, said at the time that he was happy for people to remember her through the painting. (And he’s clearly not the only one to commemorate Ríos through art. The museum features several other pieces of art that depict the late actress.)

Saying goodbye to Claure, I realise just how welcoming the atmosphere has been, and just how appreciated Rosita Ríos remains. The shop-turned-museum, which fans visited daily when Ríos was alive, gives visitors the impression that a deeply personal space has been opened up for them, allowing them to examine Ríos’s life with deeper insight. The museum is not simply a tribute to Rosita Ríos, nor is it intended to simply show her accomplishments off to the world. The museum is a family-run affair, representing not only the multiple facets of Ríos’s personal and professional life, but also how truly loved she was by the Bolivian people. 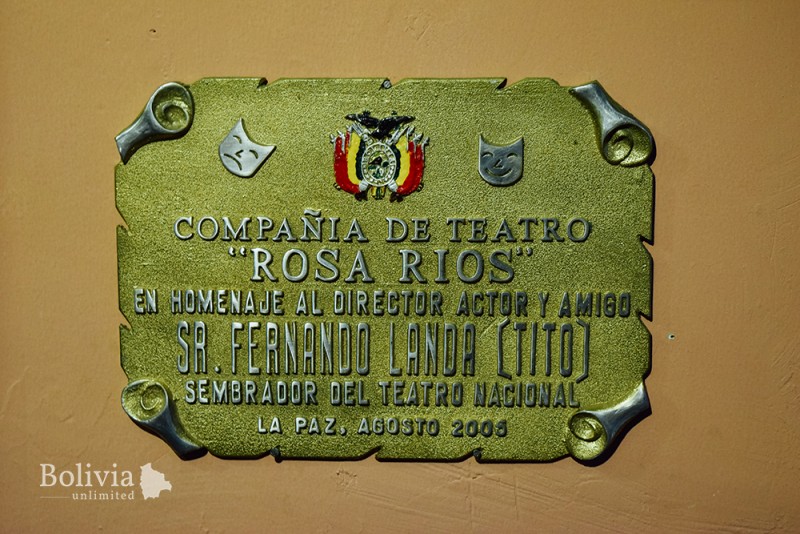