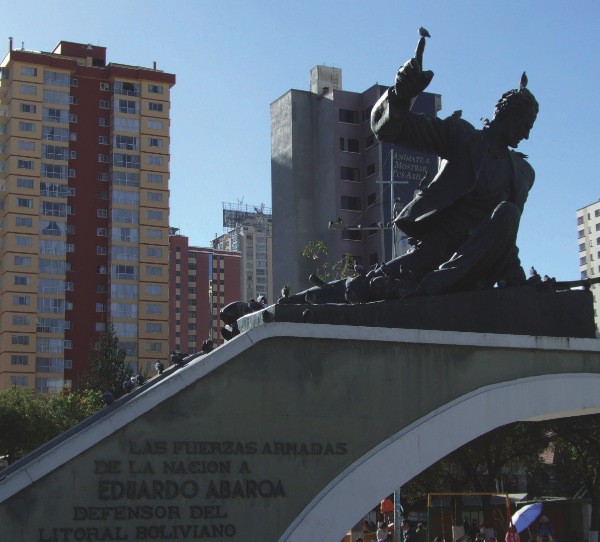 “¿Rendirme yo? ¡Que se rinda su abuela, carajo!” According to the story, these were the dying words of Eduardo Avaroa Hidalgo at the battle of Topater on the 23rd of March 1879. On this day, Bolivia lost the Departmento of Antofagasta to Chile and along with it, free access to the Pacific Ocean. The Guerra del Pacifico (1879-1884) is like a locoto, it burns Bolivian consciousness 131 years on.

Bolivia still yearns for what she has lost. The Bolivians among you will surely be familiar with the following lines from the song “Recuperemos Nuestro Mar” by Orlando Rojas : “Aún a costa de la vida, recuperemos el mar cautivo, la juventud está presente, Bolivia en alto reclama el Mar”. It is one of the marches of the Fuerza Naval de Bolivia. Naval Force, you ask? Yes, Bolivia is prepared for the day she will recover her sea, and is equipped with a 5000-man navy. They carry out a defense mission of Bolivia’s Maritime Interests in Lake Titicaca and on the 9000 kilometres of navigable river.

The attempts at repossessing the coastline have been many, under the initiative of various presidents; none of them have ever been successful. So far, Peru has given Bolivia access to Puerto de Ilo which is used for tourism. Imports and exports largely go through Chile, to whom Bolivia pays taxes and duties for use of its ports.

Yet what Bolivia wants - what her citizens really yearn for- is to regain sovereignty over the lost provinces. In this month of July, talks between Chile and Bolivia are taking place in La Paz. The theme guiding these discussions is “cultures of dialogue and peace”, and aims to solve diplomatic issues between both countries.

To discover the significance of the loss of the sea for Bolivia and its people, one would usually start at the Museo del Litoral. Unfortunately, due to its current renovation, the museum is closed and looks like a bombed-out trench. I thus decided to interview the person responsible for the museum. After searching through the streets of La Paz, I finally found her hiding behind a face-mask and surgical gloves (no, she doesn’t moonlight as a surgeon - she was only developing photos).

Veronica Rodriguez begins by giving me a description of the lost territory. I am told that the desert of Atacama is a land rich in different types of important resources (copper, lithium, guano) giving the land great economic value. Indeed the war was sparked by Bolivia’s decision to eject Chilean companies exploiting these resources but refusing to pay taxes. In response to this, Chile invaded the port of Antofagasta in March 1879. The Museo del Litoral takes it upon itself to keep alive the memory of this war in Bolivian consciousness. Veronica passionately recounts the March events: “During the whole month we raise the flag to full-mast. We invite schools and the army to the commemorative acts”.

March 23 marks the Dia del Mar, dedicated to promoting awareness about the unfair war that led to Bolivia’s amputation. One woman I speak to in the Plaza Avaroa (a monument to the hero) tells me “The 23rd of March is a real celebration!” Not all Bolivians agree this day should be a fiesta or even exist. Hernando, from Santa Cruz, says “I don’t think such a loss should be celebrated. It’s history and I don’t believe in nostalgia”. However, the Dia del Mar returns each year like a melancholy Christmas. It reminds all Bolivians of their loss and their ongoing battle to reclaim the sea. There is no hope for Dia del Mar Grinches. Veronica Rodriguez feels that this day, this month, is insufficient. “We are not very nationalistic, we exclaim ¡GLORIA! and then the moment passes”. She strongly believes that more should be done in educational terms to keep the feeling of civic pride alive all year long. In addition, various individuals tell me that they feel the desire to recover the sea is actually a factor of unity among Bolivians. In this sense the loss of the sea can be seen as a myth which underscores the Plurination’s dliuted sense of shared identity, not unlike the feeling football creates amongst fans who briefly entertain they are all engaged in the same battle. The sovereign right to the sea is not only advocated in speeches and parades, it is also present in Articles 267 and 268 of the new Constitution. It proclaims that sovereignty over the lost territory is an “imprescriptible and inalienable right”. A saleswoman on the street told me “It is our right as Bolivians to have free access to the sea; it’s normal that it should be present in the Constitution”. The vast majority of those I spoke to were very willing to tell me how strongly they felt about their right to the sea.

Aside from the sovereign ideal of an imprescriptible right to the sea (and all the symbolism that accompanies it), there is a more pragmatic issue driving this ambition: Bolivia’s economic development. One of the questions I asked Bolivians was: “do you think the desire to recover the sea stems solely from pride and nostalgia or also from necessity?” People gave me a broad range of answers, roughly divided half and half into idealists and pragmatists.
Veronica Rodriguez (and most Paceños I spoke to) felt that there was little room for development without free access to the sea, and the possibility of engaging in international trade without needing to pay for the privilege. Others (including a couple from Santa Cruz), told me that there would be no difference if Bolivia had sovereign access to the sea. “The problem isn’t access or no access, the problem is Bolivian mentality and irresponsibility. Until that changes the situation will remain the same” says Maria, Hernando’s wife.

The story of Bolivia and the loss of its sea to Chile unfolds like a grim fairytale: the stolen princess, the lover’s quest to get her back, and the covetous dragon guarding the castle. The current diplomatic impasse between both countries suggests Bolivians will have to wait for the elusive “happily ever after…”