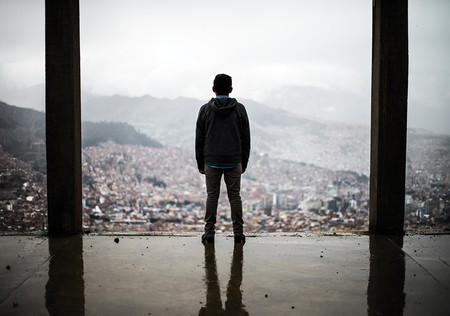 A quest to find my Bolivian birth mother

Every day I spend wandering through the streets of La Paz, I see scenes that are foreign to the world I grew up in. Cholitas pass by, bearing children on their back. Busses come to a full stop in mid-street to rescue straggling passengers. Some children work to ensure their family's income. Regardless of age, everyone seems to be working in this Andean city: mothers, fathers, children, grandparents, and somehow I blend into these scenes. People think I am one of them. They speak to me in their language and look confused when I can’t fully understand them. I've been here before, but I was too young to remember.

On October 1992, two police officers, who (I think) were on a night round, found me on the corner of a certain street in this city that remains unknown to me. They took me to the hospital because I had just been born and still had my umbilical cord attached to my belly. I was a Bolivian newborn facing a Bolivian world signed by economic, social, and ethnic inequalities. At the time, I couldn’t have known where my life was headed, but I bet no one would have guessed that it would take place in Europe.

I am now back in La Paz -- twenty two years later -- with the goal of finding my birth mother. The only bond I ever had with her were the nine months I spent quietly in her womb. Nine months that associate me with a person whose name I don’t know, whose face I am unable to recognize, and whose love I will probably never experience. I’ve often thought she made a brave decision by sacrificing what could have been our life together in exchange for my future.

I spent my childhood in Diepenbeek, Belgium, in a typical Flemish house three streets away from the city centre, where a loving Belgian family raised me. I remember cycling with my sister, playing outside in the garden, spending a lot of time on the swing and slide, and visiting mazes on family day trips. While I was growing up, my parents gave me the chance to dream and pursue my ambitions. I went to university and this month I obtained my Master’s degree in Sociology, which will allow me to apply for future doctoral studies. Everything seems to be moving in the right direction. But the direction I have chosen now leads me to a missing piece in my past, which is what I’m after here in Bolivia.

La Paz is my starting point. I’m sure my birth mother has been to some of the places I've visited in this city. She has probably walked past the San Francisco Church, for example, on countless occasions. So many questions come to mind when I observe this city. Whose child could I have been? Do I have relatives? What about siblings? If so, who might they be? The guy shouting in the minibus, could he be my brother? The girl dancing for loose change on the street, might she be my niece or maybe my sister? The guy casually selling salteñas on the corner, could he be my father? I don’t have a clue. I simply don’t know if my birth mother is still in the city. Maybe she moved away, or even passed away. This city is all I have. My only clue to begin completing the puzzle.

As a detective, my instinct was to begin my quest at my former orphanage, Hogar Carlos de Villegas. I spent the first 6 months of my life inside that building. The day I visited, I was hoping to gather bits of information about my background, maybe even decipher which street I was found on as a baby. I asked the social worker if I could see my records and, minutes later, her colleague entered the room with a red book and placed it on the table.

Once it was open, I became excited to see what had been written about me. Some of the children in the book had two pages of text that supposedly told their story. I had not even one. I took my camera out of my bag and asked if I could take a picture of my page in the book. But the social worker forbid me to do so, citing institutional privacy reasons. I could not understand. Perhaps for her, the piece of paper was a mere administrative detail, but for me it is a piece of my identity.

I’ve met several people who have been adopted and I know I am not alone in trying to reconstruct my personal past. I also know I am not the only one who has returned to their place of birth looking for answers and been disappointed. Sometimes the details about the past are just not there, about who I am, or should I say, who I ‘was’. The orphanage staff baptised me as Cristóbal Díaz, but Cristóbal is no more. He died in Bolivia when I was adopted and Christof Bex was born. I feel powerless. So many decisions have been made over my head. Now, as a young adult, I am able to take action.

Let me be clear, I’m not entirely sure I will succeed in finding my birth mother, but my search is only beginning. I have yet to request permission to view my records at the police station. I have yet to visit the hospital. There are so many ways I could go about this. Every adoption case is so different, but, I’ve learned, there are certain similarities in what motivates mothers to relinquish a child.

According to Lizeth Villanueva, the social worker from my former orphanage, a relinquished child represents some of the larger problems in society. Rosmery Cordón, the principal of another orphanage, Hogar de Niñas Obrajes, told me that children usually end up in an orphanage due to a family’s lack of economic resources, which tends to go hand in hand with more serious issues such as alcoholism, neglect, abuse and so on. All of this might seem obvious, but it was comforting to confirm what I’ve read in the literature.

I suspect that gathering information about other birth mothers might lead me closer to my own. Who knows? It’s worth a shot. Over the next several months, I will do whatever is within my reach to exhaust every possibility. If I ever find her, if that day ever comes, then I can thank her with all my heart for the life she once gave me.

Dearest Bolivian mom and dad, I would like to know you. Hopefully we can meet soon. In the meantime, though, I will do everything I can to get closer to you.