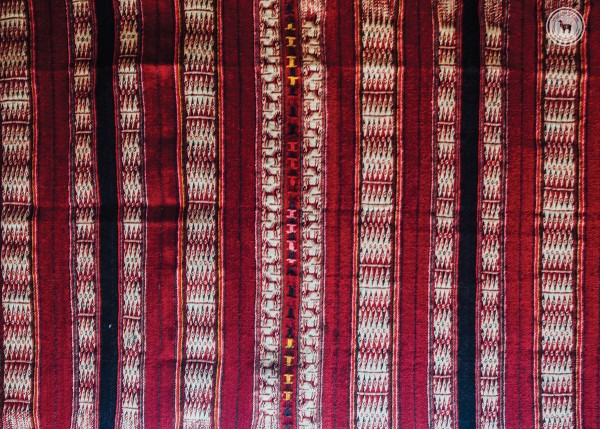 Decoding the myths of local communities

Walking down the crowded streets of Mercado Rodriguez, surrounded by vendors selling odds and ends, I slow down my pace to avoid bumping into a cholita; on her back is a bulky and colourful wrap full of groceries. As I pick  up my speed and observe the assortments of stalls and merchants, I notice that many of these women are wearing the same sort of wrap. When I take a closer look, I discover the variety of these colourful pieces of clothing, their patterns distinguished by different materials, symbols, and colours.

On these pieces of cloth, called aguayos, men and women write and paint stories of their community, using the symbols of their culture. These stories change depending on the region, each of which has distinctive colours, designs, and techniques. The fabrics have abstract designs, indigenous and figurative representations, sometimes surreal monsters.

Although there are many places in Bolivia where people use authentic aguayos, most of the bright and colourful ones that roam on the street are likely to be industrial products. They come from Peru, and are distributed throughout Latin America for very low prices. Although these pieces are common on the streets of La Paz, you can find traditional aguayos in rural areas of the country, where the weavings embody the stories of a community.

Produced by the very remote Jalq’a community near Potosí, this piece of aguayo is a very rich and complex textile art. The rectangular Jalq’a tissues are often characterized by a single space, without having any segmentation or strips on the side. The red and black colours represent the darkness in which these communities lived, which some say existed in a time ‘when the sun was the moon’. The design is chaotic; there are figures everywhere, of different sizes. It is unclear where they begin or end. The Jalq’a pattern represents a dark world filled with strange beings that belong to a non-human society. The most common creation is a fantastic animal, called a khuru, which means ‘wild’ and ‘untamed’ in Quechua. Their presence indicates the unknown, a place where man is not dominating.

In contrast to the Jalq’a weaving, this material has more real and humane representations and is influenced by the Spanish conquistadores. The Tarabuco community is located near Sucre, which explains why it uses occidental symbols such as horses. Tarabuco clothes are always symmetrically organized in strips of varying widths. This also applies to the symbols, which have a definite nature, including pictures of detailed animals and humans. The scenes depict important moments of everyday life, like women weaving and men playing the flute.

On the altiplano near La Paz, communities have been producing the same sort of aguayos for the past hundred years. These are characterized by the alternating use of pampas and saltas, where the plain monochrome areas are defined as pampas, and saltas refers to the areas containing symbols. The salta illustrates the quotidian life of these communities by using symbols of their surroundings,  mainly referring to the countryside. This specific aguayo includes a key motif with hooks ending in sharp points at top and bottom, portraying the insignia of the local healers. Typical to this type of aguayo is the use of natural colours, such as white, blue, and red.

Far-flung in the Amazon region of Bolivia, you will be able to find this very traditional type of textile. This sleeveless tunic is worn by Yurakaré men from the Beni department in ceremonial settings. It is organized into five vertical and five horizontal rows with the same sort of design. The oval shapes resemble typical Amazonian seeds, flowers, or fruits, such as cacao or achiote. The colours vary in each row. Yellow is considered unlucky and could indicate a bad harvest. Camijetas are traditionally made from plant fibre and cotton, which give them a vegetable tone.

The author would like to thank Milton Eyzaguirre and the rest of the team at the Museo Nacional de Etnografía y Folklore, as well as the Museo de Textiles Andinos Bolivianos, for help with the research of this article.