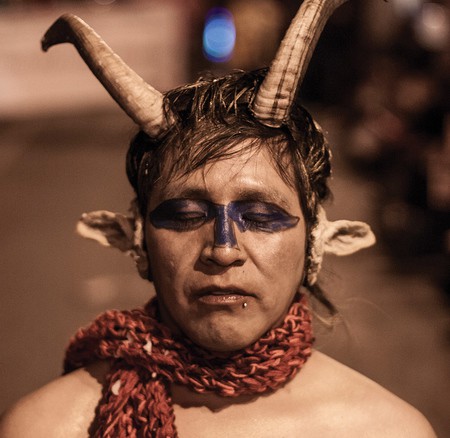 Bolivian Drag Queens Dance to their own Beat

Imagine: it's the 1980s in the U.S.A. Ronald Reagan is president, and homophobia is rampant across the country. There’s no Honey Boo Boo to sass her way into LGBTQ activism, and queer individuals hide inside a deep, dark closet to avoid violence and prejudice.

This is the backdrop for Tony Kushner’s Angels in America, a play that revolutionized the public’s perception of homosexuality in the United States. Over eight acts, a colorful spectrum of characters paints the portrait of a heterogeneous population with an even more eclectic appetite for carnal pleasure. The text’s rock is Belize, New York’s resident drag queen. Encircled by closed-minded, critical men who choose to mask their identities, Belize stands out for her unabashed self-confidence and her ability to somehow paste everyone together in an awkward but necessary relationship diagram.

Now, fast-forward to Bolivia in 2014. Instead of Reagan, Evo Morales heads the government of a country submerged in machismo, an unspoken social order that has driven indigenous civilization for centuries, only to be reinforced with the advent of Catholic colonizers from Europe. In the plazas and on cobblestone roads in La Paz, discussing sexuality is a taboo, and according to one local, short-lived underground gay bars operate as one of the only meeting spots for homosexuals in the city. Gay Bolivian vagabonds search for solace in more accepting corners of the world, and though Bolivia's youngest generation is more outspoken about sexual orientation, teenage boys are still thrown out of Internet cafés because of photographic mementos on their laptops from a night out with their boyfriends.

Sounds familiar, so where is drag queen Belize within this Bolivian drama?

Enter la Familia Galán from stage left. Fierce and fearless, the cross-dressing Family will take on any biting comment or hurtful snipe thrown their way as they strut down La Paz’s parade routes in 6-inch heels.

La Familia Galán is a nucleus for LGBTQ (lesbian, gay, bisexual, transgender, queer) activism in Bolivia, challenging traditional values of sex and gender through drag performance. As Bolivia’s central unit for trans politics, the Family is known as much for its courage and resilience as for its good humor and playful attitude.

In her dissertation, University of Manchester student Fliss Lloyd referenced a Conexión Fondo de Empancipación study from 2011, which, according to Lloyd, found that transgendered Bolivian citizens ‘were the most vulnerable [to homophobia], with 75% reported… being threatened with violence, and one third having suffered physical abuse’. Whether straight, gay, or bi, when a member of the Family leaves the Galán safe space to make a public statement in drag, they risk their own necks in an attempt to foster a more egalitarian and open Bolivia. But never fear—when the group and its allies are united for one of Bolivia’s great fiestas, they’re practically untouchable as they inspire a political dialogue through makeup and dance.

‘The fiesta has given us the option to make ourselves visible’, Danna Galán, the starpower of the Family, said. ‘All of the microphones are for us. And from there, one gets a read on popular culture’.

While the Familia has chosen to use streetside parties as a way to interact with Bolivia’s mainstream, they also sit around coffee tables together and explore more nuanced viewpoints on what it means to be part of Bolivia’s sexual diversity. Their theoretical discourse is confined to a smaller group of intellectuals who are interested in the social implications of LGBTQ activism, and major themes include identity and the body as ‘a space of oppression’.

‘We don’t really believe in an identity’, Danna Galán explained. ‘To continue planting the lesbian, gay identity is to continue having conservative views because identity is oppressive when you believe it yourself’. According to the Galán Family’s main queen, however, intellectualism serves little purpose when it is not linked to action. ‘Reflection and theorization would not have any meaning if it didn’t enter daily life’, she added.

The Familia Galán may have altered Bolivia’s gender landscape to introduce options beyond the standard binary, but the nation’s pre-Hispanic origins continue to exercise an overarching influence on Bolivia’s social structure. Indigenous groups such as the Aymara and Quechua still believe that each gender has a set role to play. An article from Santa Cruz’s El Deber in 2012 cited an anonymous chiquitano correspondent, who claimed, ‘I don’t like homosexuals because it’s a small town, and in this town, there has never been that class of people’. It is evident that in this kind of traditional, dichotomized culture, there is no room for same-sex partners.

Even though these gender expectations originated in rural terrains with agrarian economies, where they proved necessary for survival, they have gradually seeped into urban life in cities like La Paz as families have moved from the country to metropolitan areas. Men rejoice when their wives give birth to baby boys, and both parents raise their sons to continue the bloodline in a heteronormative way.

Given these ongoing traditions, gender relations in Bolivia's social and political capitals remain conservative and restrictive. Sexuality is viewed as a given based on sex, and though homosexuality exists as a concept in the country, the topic suffers from a hush-hush policy.

‘It’s a matter of culture, I guess’, Bolivian citizen Andres Pereira said. ‘And in this culture, silence is so important. Silence and tradition’. He noted that almost 80% of his friends in the LGBTQ community have left the country to be a part of a more progressive environment.

Perhaps even more disconcerting than the public’s silence regarding homosexuality is Morales’ choice of words when talking about the subject. In 2010, Morales was under serious heat from the Western press when he implied that eating chicken with hormones would make men gay, and since his initial election in 2006, the president has become notorious for expressing controversial opinions on social issues.

‘This government is the most macho government you’ve ever seen in your life’, Pereira claimed.

While some members of the LGBTQ community are disheartened by the persistence of homophobia in both the public sphere and in their private worlds, others are optimistic about Bolivia’s social future. Despite Morales’ condescending quips, while president, he has passed several laws, including Law 045, that protect minority rights. Even if, in practice, these pieces of legislation are rarely enforced, they function as a symbolic olive branch to the LGBTQ population in Bolivia. And on the streets, where politics become passé, bold homosexual couples hold hands and sometimes steal a kiss in public. Though they may be surrounded by surprised stares, the stares are not always glares, but glances affected by the unknown.

A few days ago, a Bolivian man told me the story of his high school reunion, where he introduced his Belgian boyfriend to his former classmates. The alumni greeted both men with open arms, or in his case, with a drink to start off the night. No one was wearing drag. There wasn’t a parade with 6-inch heels. But, in his perspective, a beer with his buddies and boyfriend outshone the shimmer of sequins on a loud costume.

Perhaps the problem lies in that, for every high school reunion and kiss in the street, there is an outburst of prejudice that demonstrates why the Familia Galán is so important. Most recently, representative Roberto Rojas of MAS commented on a protest against homophobia that took place on June 27 in the Plaza Murillo in La Paz. His problem? Two women kissing on the steps of a cathedral. His conclusion? ‘Our country is not prepared for this situation, for homosexuals. A sickness. They seem like mentally ill people, it’s a lot of radicalism’.

‘The thing with Roberto Rojas was the most recent instance of homophobia’, Danna Galán said. ‘I’d rather be up against a Roberto Rojas who says that [homosexuals] are mentally ill people than someone who shows you kindness and gives you hugs and then gossips behind your back’.

Thanks to the likes of Rojas, Bolivia needs its version of Belize. The closet door is opening little by little, and the Familia Galán is standing by to make sure no one slams it shut again.