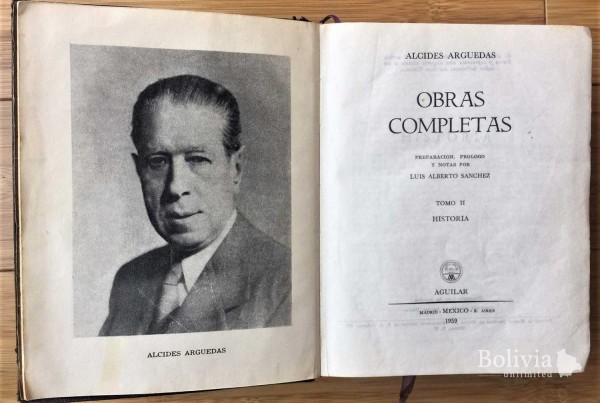 Culture, Indigeneity and The Arts

In the Bolivian Ministry of Education’s digital online library, Alcides Arguedas’s 1919 novel Raza de bronce features in the collection ‘15 novelas fundamentales de la literatura boliviana’ (15 fundamental novels in Bolivian literature). The novel has earned a place in the Bolivian state-school curriculum for over 50 years and continues to be widely read and studied by Bolivian students in both primary and secondary school education. The novel’s readership is multi-generational, stemming from an array of different socioeconomic, ethnic backgrounds. Yet, Raza de bronce also has the power to unite readers by drawing on their experiences and knowledge of the politics that are tangential to the book’s plot, and reflecting on a timeless Bolivian reality characterised by the social struggles of the rural altiplano populations in the novel.

Raza de Bronce was written at a time of extreme political turbulence and ambivalence: liberalism in Bolivia. Conservative parties and the mining elite were at war with a new wave of liberals who teamed up with revolutionary indigenous powers. Liberals promised to cooperate with the popular sectors, favour them and return their land only to go back on their word when they assumed power. The sociopolitical turn of events feed into Arguedas’s novel, perhaps because of his professional background as a politician and a sociologist, or perhaps because of the political inclinations behind the cultural movement that was beginning to take shape. Raza de Bronce is a pillar in Latin American literature as it is considered to be the first text in the indigenista movement in Bolivia. In The Cambridge History of Latin America, the novel is cited as ‘the most important work of early twentieth century indigenismo.’ The indigenista movement was a cultural and political wave that consisted of non-indigenous voices supporting and speaking for the indigenous populations of Latin America.

Raza de Bronce is a pillar in Latin American literature as it is considered to be the first text in the indigenista movement in Bolivia. In The Cambridge History of Latin America, the novel is cited as ‘the most important work of early twentieth century indigenismo.’

Raza de bronce was originally written and published under the name Wata Wara (after the eponymous Aymara heroine) in 1904. The second edition is structured into two parts: the first half ‘El Valle’ (‘The Valley’) narrates the engagement of an Aymara couple (Wata Wara and Agiali) who are working as farmers in a remote community near Lake Titicaca, and Agiali’s subsequent journey through the altiplano to sell his produce and buy seeds for their abusive superior. The second half of the novel, titled ‘La Yerma’ (‘The Barren Land’), describes the surrounding landscapes, and how colonisation affected the indigenous communities in the area. Upon Agiali’s return from the valley, a series of racially motivated crimes towards these populations culminate and lead to the novel’s climax.

Racism and class discrimination are the overarching themes in Raza de Bronce. For Iván Apaz-Calle, published author and indianista academic, the novel’s significance lends itself to the way in which it ‘presents the condition of the indigenous populations in Bolivia’ and how it ‘denounces their oppression, the authoritarianism of mestizos, and White decadence.’ Arguedas provides an interesting commentary on racialised social mobility in Bolivia: ‘the indigenous figure can change his/her life, improve it and even get rich; but they will never be able to leave their social and racial class.’ In other words, Bolivians are bound by rigid social and racial constructs that inherently work in favour of the ruling White elite, and permanently marginalise and repress the poorer, more indigenous sectors of society, making upwards social mobility close to impossible for them.

The character of Pablo Pantoja embodies everything Arguedas disliked about racial and social prejudice in Bolivia. The character is a mestizo landowner of a hacienda (a colonial plantation or ranch which relied on indigenous workforces), who incessantly abuses and looks down on his workers – who are Aymara farmers. In Raza de bronce, the author writes that ‘for [Pantoja], the indigenous man was worthless, and only served to plough fields, sow, harvest, transport the produce, sell it and receive payment.’ His attitude towards his workers confirms the hierarchical nature of social, racial strattas and how these two aspects intertwine. Pantoja goes from being the perpetrator of racism in the context of the novel, to being the possible victim of racism at the hands of someone who is richer and/or whiter. His characterisation echoes what contemporary indianista philosopher Ramiro Reynaga describes as Andean racism which has a somewhat unique and ‘strange’ dynamic. ‘The indigenous Andean man can go from being the perpetrator of racism in the morning, to then being the victim of racism in the afternoon,’ he says. These racial, social pyramids continue to haunt Bolivia today, showing us that little has changed – in this respect – since Arguedas wrote the book. 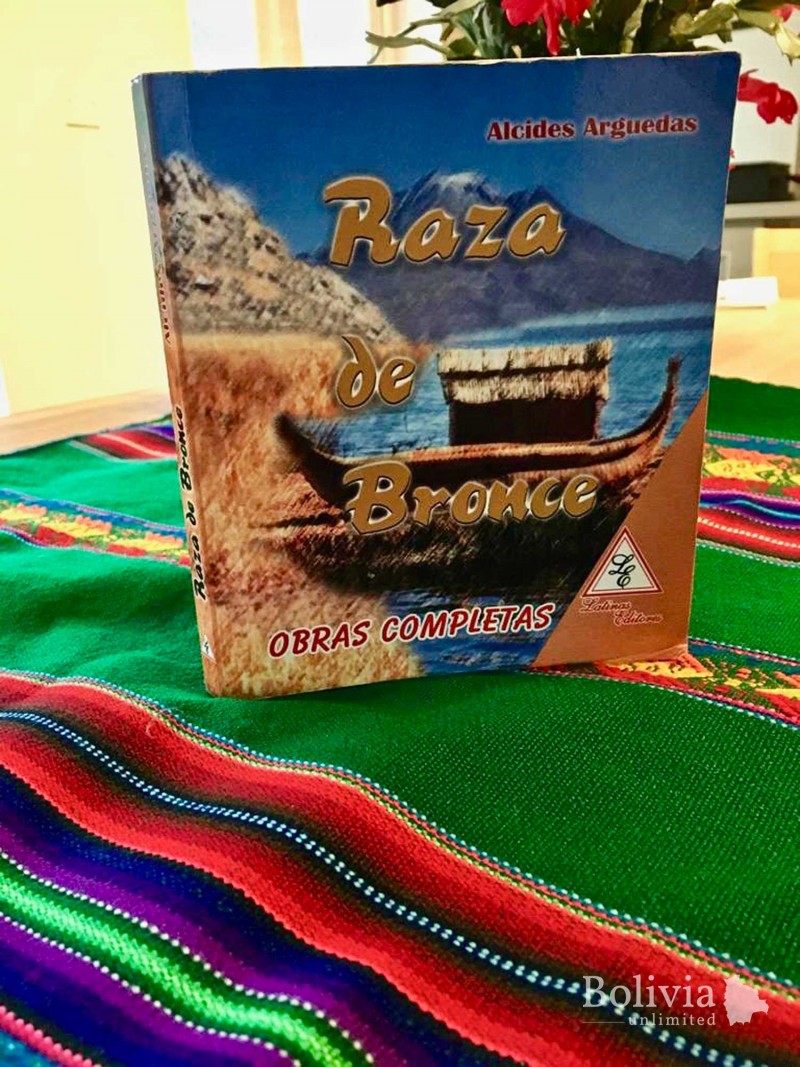 The Aymara farmers have to endure racism, discrimination and inhumane conditions due to inpoverishment throughout their journey to the valley. Arguedas writes that ‘they had to bear all kinds of insults’ from passersby. In the second half of the novel, the racial abuse eventually escalates to the point that the Aymara characters revolt in protest of their suffering at the hands of the corrupt mestizo-creole characters. Although the author writes the novel in third person, therefore creating a certain level of objectiveness and emotional detachment from the characters, the attention to detail in his writing style makes the experience of these Aymara protagonists seem raw and real. Darien Illanes, a university student at the Universidad Mayor de San Andrés, recalls reading the book at school when he was 10 years old. ‘I remember feeling horrified,’ he says, ‘what I found most terrifying was knowing that all of the suffering that these characters have to endure throughout the plot represents an indigenous Andean reality.’ As a non-indigenous spokesperson, Arguedas was never able to fully simulate the indigenous experience to its full capacity. But, for many readers, Raza de bronce provides them with an insight into the injustice and ostracisation that was felt by thousands of other Bolivians.

Raza de bronce’s inclusion in the Bolivian school curriculum may seem odd due to the complexity of the politics, history and racial dynamics that are extensively explored by Arguedas. Apaz-Calle explains how ‘most students will be obliged to read this book at school because of the model of our education system, which centres on decolonisation.’ The novel’s analysis and exploration of themes are an important introduction to generating debates on what Apaz-Calle refers to as the ‘the colonial side of today’s society’, from a young age. After all, learning about Bolivia’s colonial past should be no different to having a history lesson on the Tiwanaku era or the Inca dynasty. As well as being a key player in a student’s grasp on decolonial thought, Raza de bronce also brings cultural diversity, alternative worldviews, and ruralism to urban school settings.

Raza de bronce’s inclusion in the Bolivian school curriculum may seem odd due to the complexity of the politics, history and racial dynamics that are extensively explored by Arguedas.

Arguedas’s novel has not only earned a place in the school curriculum, but also in Bolivian popular culture. In 1976, Theatre company La Máscara debuted their adaptation of the novel at the Teatro Municipal de La Paz. It was a hit, winning the National Theatre Festival prize. It remains as one of the most popular theatre productions in Bolivia to this day. Two years later, the novel inspired folkloric band Savia Andina’s song Raza de bronce. The book also forms a part of La Paz’s Biblioteca de Bicentenario, a library comprising of 200 national texts which all contribute to the ‘understanding of Bolivia’s past and present.’ Arguedas’s book procured an international status after UNESCO decided to create a published edition of the book to display in their digital library.

Raza de bronce should only be considered a historical novel due to the fact that it was written over 100 years ago. In more ways than not, the deep-rooted social injustices that are presented in the novel have never been more relevant in Bolivia than they are in this day and age. Raza de bronce is not just an obligatory text that students read and study at school, it is a canonical Bolivian book that should be picked up more than once in your life. The indigenista movement has its limitations and its flaws. Speaking on behalf of marginalised and repressed social and ethnic groups, paternalism, and assuming and representing their experiences is problematic. However, it was a necessary stepping stone in Bolivia that has, to some extent, opened up a safe space for intercultural exchanges and vision.