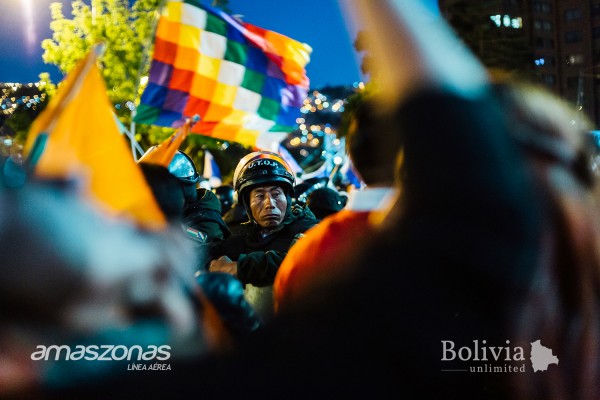 The history and significance of the wiphala in the Bolivian imaginary.

There is minimal, if any, concrete historical evidence of the origin of the wiphala, the multicoloured flag common to the Bolivian Andes. Aside from its links to Bolivia’s pre-Columbian civilisations and present day Quechua-Aymara philosophy, the flag’s story has been appropriated, twisted and turned to the point of obfuscation in order to foster the rise of popular movements, political discourses and fantastical tales. Many scholars and historians have managed to trace the patterns and colours of the flag to precolonial times, all the while debating its primary function: Did it serve as an astronomical calendar or merely as a vibrant decoration that would come to mean much more? Sure enough, the flag’s history may seem vague, yet the wiphala has become one of the most symbolic and controversial national symbols of Bolivia.

Franco Limber, an advocate of the indianista ideology and author of Breve historia real de la wiphala, dedicates his book to deciphering historical truth when it comes to the flag’s beginnings. He believes it is important to consider some hypotheses behind the wiphala’s historical roots. Despite Limber’s disclaimers warning readers that his ideas may ‘lack veracity’, his findings have such an intimate relationship with their respective historical contexts that it would not be absurd to value their rationale and probability. For example, an uncanny resemblance of the wiphala pattern can be seen in textile artefacts from the Tiwanaku era: There is no mistaking the colourful, diagonally aligned squares that appear on some weavings from that time. Limber also attaches a photo of a precolonial keru (also spelt qiru) – an ancient Andean ceramic vase – to his study to provide visual evidence of one of the first recorded appearances of the wiphala. Although this vase is considered to be Incan, it’s worth noting that the creation and use of flags in general was thought to have been exclusively European. In fact, wiphala in Aymara is simply translated as ‘a flexible, waving, square object’, possibly suggesting that it was originally meant to be the linguistic translation for ‘flag.’ On the aforementioned vase (which can now be found on display in the Archaeological Museum of Cuzco), an indigenous figure carries seven-by-seven rainbow-coloured squares over his shoulder. This same pose and pattern would be reproduced in colonial baroque art by anonymous artists who illuminated the walls of the church of Calamarca with ethereal paintings of angels carrying representations of the wiphala. The artistic and historical record of what we now consider to be the wiphala undoubtedly points to a certain significance and prevalence of this pattern in Bolivia’s past, even if its true essence and precolonial meaning has disappeared over the years.

In 1979, Bolivian historian Germán Choquehuanca began the next chapter of the wiphala’s history. Based on the design and the seven colours that appear on the keru exhibited in Cuzco, the historian was inspired to redesign the flag that is presently sewn onto uniforms nationwide, and proudly flown over La Paz. Choquehuanca’s contribution to the story extends far beyond redesigning the flag; he also played an important role in reinstating the flag’s revolutionary political value in a modern context. The wiphala has been historically viewed as an anticolonial symbol that was carried by indigenous rebels such as Tupac Katari and Pablo ‘Willka’ Zárate during their struggles against colonial forces. Many years later, in 1970, this revolutionary Aymara icon would serve rural Bolivian syndicate movements in their protest against hegemonic powers. Nowadays, you will be stretched to find a popular social uprising across the Andes that is not accompanied by a multitude of colourful wiphalas. Choquehuanca, much like Limber, believes the wiphala to be inherently Andean – something that was born into and will always be an emblem of Quechua-Aymara culture and the indigenous populations of the Andes.

The colours and the design of the wiphala are equally as meaningful as its history. Each of the diagonally aligned colours that appear on the wiphala stand for different concepts relating to the cosmovisión andina: the red represents man’s relationship with Pachamama (Mother Earth), the orange represents social and cultural expression, yellow stands for ch’ama-pacha (power and energy), the white represents time and development, green is the richness of nature and agricultural production, the blue stands for cosmology and the purple represents Andean ideology and indigenous politics. Although these concepts stem from Quechua-Aymara culture and thought, the overarching themes of unity, revolution and justice that are so frequently tied to the wiphala have engendered the flag’s widespread appropriation across many native populations in Latin America that fight similar battles against discrimination and political oppression.

The wiphala is an omnipresent symbol to be reckoned with in Bolivia. Its visibility throughout the nation, as well as its inclusion in significant cultural works such as the artwork of Bolivian artist Walter Solón and Jorge Sanjinés’s film La nación clandestina, highlight its emblematic nature and how deeply embedded it is as a national symbol. It is a flag that directly represents the ongoing struggles that the majority of this country face on a daily basis. It has withstood a turbulent history of modifications, and commodifications, and never lost its inherent revolutionary spirit in the postcolonial period. It is a flag that does not just belong to a select group, or represent a presidency or a person – it belongs to all Bolivians.