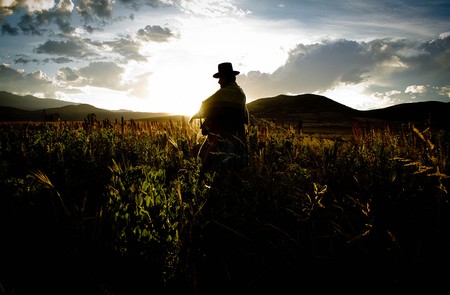 From staple to Super Food

The United Nations declared 2013 the International Year of Quinoa. But why bring this superfood to the public consciousness for just one year alone? Quinoa, a grain once used as a commodity by Bolivians, is now worshipped by health lovers in the Western world. I set off to investigate the properties of this super-grain, and exactly how it came to claim that year in the limelight.

I meet with research scientist Guillermo Tapia, who has studied the grain extensively, to discuss all things quinoa. He delves into the depths of the biochemical composition of quinoa, and it's clear from the outset he's the man in the know. This small grains is brimming with every nutrient imaginable—antioxidants, anti-inflammatory phytonutrients, omega-3 fatty acid, alpha-linolenic acid, healthy fats, vitamin E, and everything from copper and zinc. Tapia also points out that in addition to eating the plant as grain, it can also be used to produce leche de quinoa, essentially quinoa milk (the Andean equivalent, perhaps, of soy milk).

Andean Valley S.A, a quinoa production plant situated in El Alto, prides itself on the organic royal quinoa product it provides. The rise in demand for quinoa has seen this company grow from a backyard in the south of the city to an international plant with its first exports to the United States in 1998. Seven years ago, Andean Valley could source a 46-kilogram bag of quinoa for the mere price of US$20. Today, that same amount of quinoa goes for US$300. It's not enough for this ever-expanding empire to source sufficient amounts of quinoa from the original 21 farming families that it used to in 2001. More than 450 families within a 200-kilometre radius of Uyuni, in the southern altiplano, are now involved in gathering this grain for the company. What’s to explain the surge in popularity of this Andean staple?

‘Clean’ and ‘raw’ foodstuffs have become increasingly popular in the Western world. Quinoa, with its high nutritional value, has even become trendy in certain circles. It’s the main ingredient of English model and nutritionist Danielle Copperman's newly launched breakfast option Qnola. Back in Bolivia, though, Andean Valley also produces quinoa breakfast cereal, along with quinoa pizza, burgers, pudding and flan, and the company is testing new recipes for quinoa brownies and pancakes.

Javier Fernandez, CEO of Andean Valley, has another theory about the popularity of quinoa. He asks me if I know what la encefalopatía espongiforme bovina is. ‘¿Vacas locas?’—mad cow disease? Since 2007, mad cow disease and the avian flu diminished consumer desire to eat certain meat products. In 2009, swine flu reached pandemic status. So, was the quinoa trend born more from a need for an alternative to meat than it was a simple desire to find healthier food? Quinoa, with its superfood status, may well be the only grain that can be considered a viable alternative to animal flesh. And its ability to grow in the barren conditions of Bolivia's southern altiplano render it unlike any other.

For now, Andean Valley is working to develop technologies and provide harvesting machinery to its farmers in order to maintain its sustainable, organic product. Even as quinoa production in Peru is growing, Fernandez and his company hope to keep the grain quintessentially Bolivian, purchasing from the burgeoning family farms in the high altiplano, whilst still conserving its organic ethic.