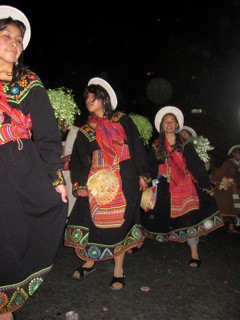 Who will sow the land? The Jalqas sow the land. When I decided to join the Jalqas I did not realise the gravity of what I was undertaking. Enticed by merrily leaping couples, it seemed like a fun dance to take part in. Certainly it is a community dance, and the compact sense of unity that drew me in, the vision of 40 people swaying as one block, proved most satisfying and real. But what had seemed so joyous in rehearsals, on the day of performance became something far darker and far more profound.

The preparatory atmosphere up at the top end of the Prado was not unusual. The men arrived in their home clothes, and slouched around with their costumes tucked sheepishly into their bags. The women arrived dressed, and began the community ritual long before dancing. We eyed the Morenadas, and complimented them. We eyed the other Jalqas group, and said, “They have a nice pattern on their aguayo. Our dress is prettier though.” As we waited we helped each other arrange the flowers and pin them to our backs. Before dancing, we left our bags in the ornately adorned car that would drive before us. We pressed up to the door, whilst within our leader, Yana, sat like some aged Queen in a litter, and leant heavily out to receive our offerings.

The struggle began when we tried to secure our place in the procession. We were one of the last to enter, our fraternity having not yet gained the age and status to begin earlier in the day. But we were late. The band was not to be found; we rushed around anxiously, locating first a lone trumpeter, who finally made out his friends, engrossed in the latest Caporales entry. By this time the Miners, who came after us, had already begun to advance. We dashed in front of them and asserted our position in spite of their threateningly advancing truck. They were displeased, but we stood strong, still untangling the chaotic mix of dancers, band-members and dislocated couples, but refusing to budge from our proud place at ante-penúltimos. Last year we had been penúltimos.

By this time, darkness had fallen and the cold was beginning to bite at my sandaled feet. Our slow start did little to relieve the chill; the bands were too close together and my bloque could not coordinate: those at the front of the group were dancing to a different, faster band than those at the back. What had become so slick in rehearsals here broke down into laboured fragments; at first overpowered by the unequal brass bands, we soon found that they had left us behind, and scurried and stumbled along in an attempt to keep up with the rapidly fading music. Our movements were less dance than swaying run, and the road panned out before us like a desolate highway. I despaired.

But in this very wretchedness lay the heart of the dance. Beating unevenly, by the time we passed San Francisco it had gained in constancy and power. Our movements began to come together, steadily and tragically. The women, in our great black dresses, chimed like dark bells. No one was smiling. The men bent low, swinging their pick axes at the tarmac. The leaders of the group marched down along the files, barking, “Agachense! Que bailen, bailen!”, and the women bent low too, still swaying, sowing seeds into the street. We rose, wheeled and spun, subservient to the cry of the leaders and the demands of the ground. The flowers on our backs drooped and sweated, but remained pinned tight. Sometimes despondently, I noticed that hardly anyone was watching us. Men in orange jackets swept the streets, the stands were being dismantled and red Paceña banners fell graciously over our heads. Families walked home, carefully avoiding the leery drunks, and in dark corners, some couples kissed and huddled. No one seemed to care for us, dancing there in the centre under higher orders. But this bleak and tired atmosphere was borne out by the Jalqas. Toiling increasingly painfully down the road, I felt gradually lifted by the grave dignity of it all: a melancholy procession, blared at from behind by the brass, pursued by miners and devils, and tethered along by a weary yet irrefutable instinct to cling to the road.

As we neared the Palco, our leaders’ severity mounted, their voices cracked above our heads like whips, and we gathered ourselves together to prepare our entry to this ultimate, brightly lit arena. We lived these final steps wholly: the bloque strode forward as a unit, the men swung the women round them in a solid formation, us women heaved and chimed our knells, our lips drew into small smiles. We had had our swan song.

Was there anyone left in the Palco to see us? It didn’t really matter, our symphony had not been danced for onlookers. It was a declaration, here at the eve of a long and revelrous day, that we remembered the cold dread of the Altiplano, the labour of the countryside, ploughing forward through the seasons, sowing and harvesting the potato crop. We remembered that triumph was our life, and reward was our death, death that kindly awaited us at the end of a long and agonizing journey.