Quechua in the City 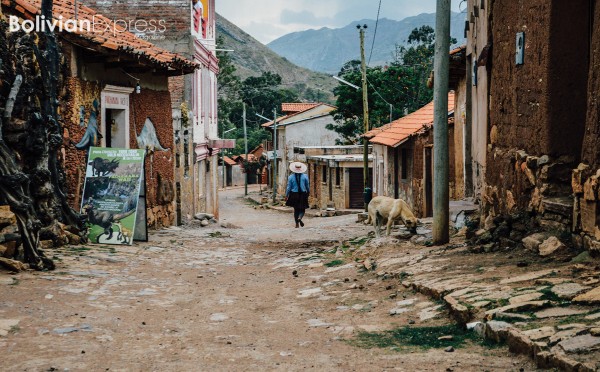 The switch is instant. I’m in a dry river bed with my tour guide, David. One moment, he is explaining in clear, relaxed Spanish how fossilized dinosaur footprints are formed. The next, another tour guide passes and he switches into a swift, lilting chat punctuated by explosive little sounds, entirely unintelligible to me. He is speaking Quechua. David is one of several million Bolivians who are bilingual in Spanish and an indigenous language.

In the undulating, dusty national park of Torotoro, in northern Potosí, everyone from the shopkeepers to the toddlers speaks Quechua. Spanish feels like the language of tourists and outsiders, a lingua franca used to communicate but not to crack jokes or declare love.

We are four hours' drive on unpaved roads from Cochabamba, the nearest city. On the bus during the journey here, we passed small ramshackle huts made of adobe, the dried-earth building material traditional in the area. Small children spurred large herds of goats and sheep at the side of the road. Every so often, I would see a sign marking projects completed under the government's drive to eradicate extreme poverty.

Quechua – technically a family of languages given the difference between the varieties – is the most widely spoken indigenous language family in South America. Famously, it was the language of the Inca empire. Estimates vary, but the number of speakers is thought to be over 8 million – more than Danish, Finnish or Slovak.

Quechua is not a language for the faint-hearted. Like such notorious tongues as Hungarian and Finnish, it is agglutinative – grammatical information, such as tense and possession, is stuck onto nouns and verbs to form colossal monster words that translate into half a sentence of English. The well-respected Jesús Lara Quechua-Spanish dictionary gives the example of janpunkipuni, which translates as ‘You'll come anyway.’

As we hike, David tells me how to say ‘Hurry up’ in Quechua, grinning at my clumsy attempts. Although he repeats the phrase several times, I can’t make the long words and guttural sounds stick in my head, and I wonder whether Quechua speakers find it equally hard to learn Spanish. Its vocabulary has little in common with Indo-European languages, making memorising vocabulary a tall order – although many Spanish words have been incorporated over time. It is also just one of over 30 indigenous languages recognised in Bolivia's 2009 constitution.

Back in Cochabamba, however, the bars and restaurants of the city centre may as well be a different country. High-rise offices and sleek restaurants jostle with grand colonial buildings. There is not a block of adobe in sight. Here, Spanish dominates once again. It is the international language spoken throughout Bolivia. It is the common tongue, used in national papers and television. Not everybody speaks it, though. While Quechua prevails in communities such as Torotoro, up on the altiplano that surrounds La Paz, indigenous communities are more likely to speak Aymara. And around the city of Santa Cruz de la Sierra, you might encounter Chiquitano or Guaraní.

When Basilia arrived in Cochabamba at the age of 15, Quechua was the only language she knew. Back home in northern Potosí, she lived in a village of 200 families who spoke Quechua and Aymara. There was no electric lighting, water came from the river, and to this day the roads are not paved. Here, her family's plot of land was small, so when the potato harvest was bad there was no food. In search of a change, they migrated to the city. ‘I couldn't speak one word of Spanish,’ Basilia says. ‘Not even a little bit. It was difficult.’

Basilia moved to Cochabamba in 1995. ‘When I arrived, I worked in a guesthouse,’ she explains. ‘Sometimes they would send me out to buy meat, but I would come back with nothing because the shopkeepers and I couldn't understand each other.’

But now she is completely fluent in Spanish. She’s lucky, though, because many who speak an indigenous language as a mother tongue don’t learn Spanish. In Cochabamba's city fringes and surrounding towns, it is not uncommon to meet people who can only speak Quechua, especially women and older people.

Being immersed in a new language is a full-spectrum challenge. Even people who are fluent in their second language sometimes struggle to be themselves in that language. If they can't find the words to express ideas quickly enough in a conversation, they might just say nothing, even if in their first language they are naturally garrulous. Communicating complicated ideas can suddenly become a process of crude approximations, making them seem ineloquent.

Moreover, when the speaker is fluent, other speakers might not realise they are struggling to convey the finer points of the conversation, leading them to believe the person they are speaking to is less intelligent or observant than they really are.

This raises the question of whether language barriers exacerbate prejudice against indigenous people in Bolivia. Before the 1952 Revolution, voting was subject to literacy requirements, which excluded many indigenous people.

Inequality in the Bolivia is still very high – according to World Bank figures, the country had a Gini coefficient of 48.1% in 2013, making it the 23rd most unequal in the world. The stark divide is clearly visible: While some Bolivians live in spacious houses with private swimming pools, others live in single-room adobe houses with no access to running water or sewage.

Census data show that people who only speak an indigenous language live mostly in rural areas, which tend to be poorer than cities. Historian Herbert S. Klein notes that among literate speakers of native languages, there has been a shift from monolingualism towards bilingualism, and from there towards monolingualism in Spanish.

In December of last year, the construction of a Quechua research institute in Cliza, Cochabamba, was announced. Built over a 13-hectare site, the facility will cultivate knowledge of the Quechua language and culture. Responsible for the project is the Instituto de Lengua y Cultura de la Nación Quechua, which was inaugurated in 2013 to recover ancient Quechua practices and promote Quechua culture. Perhaps spaces such as this will help speakers of Bolivia’s native languages to discover more about their linguistic and social heritage.

Splashing his face in a mountain stream or chatting about how to climb the steeply slanted tectonic plates that form Torotoro's striking scenery, David appears content in his beautiful, remote place.

As for Basilia, she has not returned to her hometown in 10 years. Her family is in Cochabamba now. Her children's first language is Spanish, although they understand Quechua and are learning to speak it. But be it through choice or necessity, some speakers will never learn Spanish.