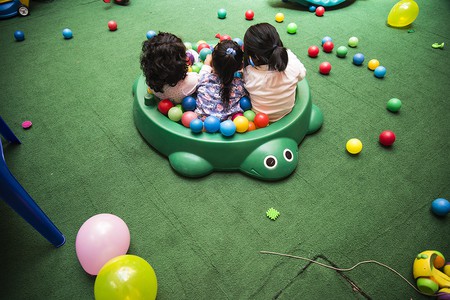 It is 11AM on a Monday morning and twelve young children wielding plastic cars and picture books totter about in the brightly coloured basement of the Virgen de Los Deseos. An array of animal cushions line the back wall and an overflowing ballpit captivates the young audience. It is the new year inscription day at the daycare and several mothers wait in the passage to collect their children from the first of the morning sessions.

‘I chose this daycare especially because it is run by professional psychologists who help the children develop’, explains one of these waiting mothers who enrolled her daughter the year before. ‘They make them feel comfortable so the children don’t want to escape and there are always educational projects and activities going on to keep them interested.’ The proof lies behind the swinging doors. Bearing an enormous grin and still clutching a bright blue ball, her daughter bursts through into the passageway to greet her mother.

Yet walking down Avenue 20 de Octubre, it’s difficult to imagine the gaudy red exterior of Virgen de Los Deseos as a daycare centre. Blackened window panes, a blood red pair of painted lips and a twisted mural of a crouching woman, give an air of seductive mystery to the place, until you cross its threshold into the quaint tea room within.

Both the tea room and the daycare are run by Mujeres Creando, an anarcha-feminist group that seeks to expose entrenched gender prejudices in Bolivia. They do this mainly through protests, street art and broadcast media, and their message is clear: women are entitled to equal opportunity, opinion and sexuality. Whilst exercising these basic rights can be difficult in a patriarchal society, the organisation has put forth a set of initiatives that are proving to be revolutionary.

The pink house, though small, is vital to this operation. To some, it is a tearoom serving hot api and home-baked pastel; to others, a bed for the night when horrors at home become too much to bear. But the basement has even more to offer. A sign outside announces the return of the pink house’s third initiative, Mi Mama Trabaja, a feminist daycare service that promises mothers the chance to ‘reignite their dreams and desires in the everyday struggle for happiness’.

A key member of Mujeres Creando, Rosario Adrian has been running the daycare since 2007. Her aim was to swiftly launch a scheme designed to salvage the careers and ambitions of women otherwise occupied in a round the clock daycare of their own. According to Rosario, the generalized vision of women as experts only in childcare and comercio informal is only a patriarchal imagining of ‘an overwhelmingly empty motherhood’. Since Rosario recognises that the generic ‘family nucleus’ is often just the mother, she designed a program that ‘allows women not just to work, but to grow, to gain some autonomy, to do things, including helping other women’ she explains.
The daycare is a self-sufficient scheme, independent of government funding and with independent women at its core. Painted ceiling to floor in colourful murals, it is less a parking lot for children than a fully-equipped activity centre that promises educational, emotional and physical support for all those who enroll. ‘It is a place where children can go to find respect and affection’ says Rosario, ‘sometimes they fight amongst themselves but they have to learn how to deal with these situations’.

Part of what makes Mi Mama Trabaja special is that the daycare operates as ‘Un servicio social’, where the mothers are seen as ‘mujeres solidarias’, who bring tea and cake to workshops, provide emotional support for each other and, at times, assist one another financially when ends don’t meet. Alongside the center’s daily activities, the staff encourages responsible parenthood by setting up workshops for mothers and fathers involved.

As the name of the organization suggests, Mujeres Creando injects creativity into all of its initiatives, including the daycare. The educational materials they use are clever and original. Here, racial, social and sexual prejudices are brought up daily only to be broken down, as children are educated about the realities of the adult world and other topics usually delayed until later in the school curriculum. Turning the pages of one the books used at the center, Barbara Cole’s ‘Mamá puso un huevo’, I was struck by its frank illustration of sex, the playful illustrations of ‘Mamá’ and ‘Papá’ unphased by this social taboo. 'Sex and sexual relationships are important to an early understanding of our own bodies', says Rosario, ‘protecting children from what is natural is only a detriment to their teenage years.’

The cost of the service is marginally higher than that of state-sponsored daycares, but cheaper than private alternatives. The only difference, Rosario says, is that what they have to offer is priceless. Working morning, day and night, each staff member is professionally trained, well-equipped with pedagogical tools, and many are accredited psychologists. Their aim is to instill in children a basic understanding of social issues “by dismissing violence, and deconstructing the cultural prejudices that exist on the television and in society in general’. Since children at the daycare are aged between two and five and at an impressionable stage of their development, this early education is intended to help change their attitudes as adults in the future.

The team is small, but their ambition is great. Now in its ninth year, Mi Mama Trabaja remains true to its initial purpose: supporting vulnerable women, readdressing maternity and developing the educational potential of generations to come. It is, as Rosario concludes, ‘A safe place, a warm place, a place of education’.