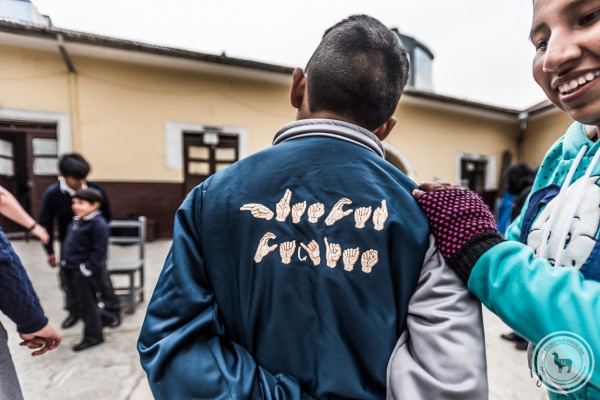 ‘There is a mountain of work still for us to do,’ Valeria Salinas tells me. Her initiative, Proyecto Sinestesia – a biweekly theatre workshop at the Huascar Cajías centre, in La Paz’s Miraflores neighbourhood, for deaf children – has been as much a learning curve for her team as it has for their subjects. Valeria and her directors hope that their acting workshops will help the children to express themselves more freely, and go some way towards ameliorating problems faced by those with disabilities in Bolivia.

Valeria has the perfect personality to lead this project. She’s emotive, and her gestures are energised and precise. She has an infectious enthusiasm that seems to have come straight from the playground, and she becomes increasingly animated as she runs me through the progress of her project.

It is about problem-solving, she explains: for herself, her staff, and the children. When I visit a rehearsal the following week, artistic directors Alejandro Zurita and Alejandra del Carpio recount how they had to go back to the drawing board after their initial encounters with the children. ‘We tried to do a survey asking what their perspectives of theatre were, and what they wanted to achieve from our project,’ Alejandra says. ‘They struggled initially to understand the question, and once they did, no one was able to communicate their answer.’

‘Imagine if they had to communicate something far more important about their lives, they couldn’t!’ Valeria posits, with wide-eyed exasperation. This idea really hit home with the directors, Alejandra explains, when one child noticed a large scar on her wrist and then pointed to a similar one on his own. She tried to press and find out its origin, but the child in question was unable to express how it had happened.

Working alongside interpreters, the crucial first task has been establishing a method of communication. Beginning with graphic images depicting well-known stories in order to establish a collection of universal signals, the group then gave each other hand signs for their names: Valeria’s, she shows me, is a right index finger swiped across the brow; mine, chosen by the children, is a right fist drawn downwards from the chin, as if mocking my genetic inability to grow a wispy beard.

With these basics established, the principal task was to coax the children out of their shells. Norah Maeve Limachi, who moved her daughter to the Huascar Cajías centre after she had struggled to integrate elsewhere, says, ‘There is often a psychological block for deaf people – they are afraid. Thanks to the project, they are learning to act, to disentangle reality.’

‘What has been interesting for us,’ Valeria elaborates, ‘is witnessing how the children begin to open up to us through the exercises.’ This is a metamorphosis I count myself extremely fortunate to witness. My presence on the sidelines of the rehearsal is met initially with puzzled expressions and timidity. However, once my sizeable frame is deemed an essential component of an imaginary ‘boys vs girls tug o’ war’, the class embraces me wholeheartedly – even despite a heavy imaginary defeat for the boys.

This exercise is typical of the early stages of the workshop. ‘We are teaching them to interpret actions, how they should behave when they are in love, when they are sad. How to control their bodies so that they can learn to communicate,’ Valeria explains.

‘Before, she was very shy, very timid. But, thanks to this project, she is more able to engage, to cope.’

Norah has noticed a tangible change in her daughter’s demeanour. ‘Before, she was very shy, very timid,’ she says. ‘But thanks to this project, she is more able to engage, to cope.’

Proyecto Sinestesia, however, is struggling to gather funds. Some financial support has come in from the Swiss embassy, but it is scrambling to prop itself up, let alone support these vulnerable children and their families.

‘The Bolivian people are not conscious of this struggle,’ Valeria laments. And the struggle is not simply at the institutional level. When I later ask Norah about life as a parent of a deaf daughter, she says that it can be isolating and financially precarious.

‘There is a total lack of support for people with disabilities in Bolivia,’ Norah says. ‘The government wants to help, but it lacks any concrete plan or vision. They are not conscious because they do not live the struggle on a personal level; they are unaware of what it entails. There is no financial aid for most parents of disabled children.’

Norah and Karla travel three hours every day to and from their home in the Río Seco area of El Alto. To Norah, the struggle is difficult, but ‘I have to look after my child,’ she says. ‘I can only be a parent, nothing else. This is the greatest difficulty that all us parents experience. It is our disability.’

On 23 and 24 June, the children of Proyecto Sinestesia will be performing a new piece of theatre, exhibiting what they have learnt at the Teatro Municipal de Cámara. Any donations to the project are hugely welcomed. Contact +59172086028 if you wish to contribute.