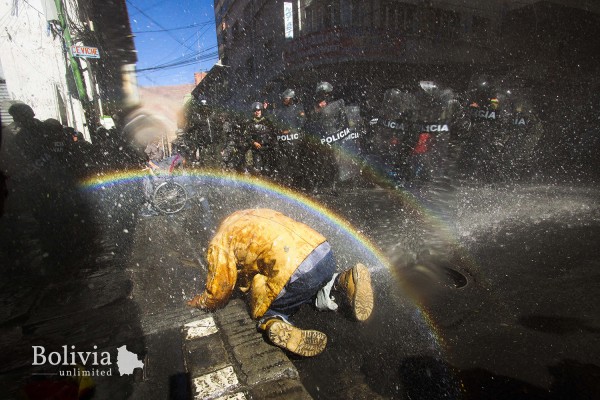 Back in 1981, a New York Times headline declared that ‘For Bolivia, Chaos Rules.’ This referred to the fact that despite constant regime changes, coups and other uprisings in Bolivia, poverty remained constant. But however accurate that was in 1981, Bolivia has changed dramatically since then and the opposite has now become true: The current government has been the most stable since the country’s creation, and Bolivia has Latin America’s fastest-growing economy. However, for those living here today, this 37-year-old headline – taken out of context – still rings true.

Roadblocks, protests and strikes are, to commuters’ frustration, fairly common occurrences, alongside marches on the Prado with fireworks exploding in the background. The end of past neoliberal regimes hasn’t brought the end to this chaos. For instance, on 8 January 2018, Bolivian doctors finally ended a 47-day strike that affected the whole body of medical professionals. Except for emergency situations, medical care was greatly reduced in hospitals and pharmacies. The strike came with continued demonstrations, some of which escalated to hunger strikes. Doctors and medical professionals were protesting Article 205 of Bolivia’s new penal code, which imposed heavy sanctions on doctors found guilty of causing physical harm to their patients.

The last few months have been particularly tense, especially since Bolivia’s Constitutional Court overruled on 28 November 2017 the 2016 referendum prohibiting President Evo Morales from running for a fourth term in 2019. Now he’s free to run again, next year and for the rest of his life. And, with the second anniversary of the annulled referendum approaching on 21 February, tensions and demonstrations are multiplying. Morales’s opponents – as well as his supporters – are planning marches across the nation. Teodoro Mamani, secretary general of Bolivia’s farmers’ union (CSUTCB), is expecting ‘around 3 million farmers to get mobilised in support of the president.

Nowhere else in Latin America have social movements been as influential as they are in Bolivia, where they’ve been – and continue to be – the impetus of social and political change. In 2003, the government of Gonzalo Sánchez de Lozada was overthrown due to massive waves of protests, first during 2000’s Water War in Cochabamba and then during 2003’s Gas War in El Alto, both of which brought the masses to the streets, contributing to Evo Morales’s eventual ascension to power. More recently, demonstrations in 2012 against the development of a highway in the TIPNIS region effectively stopped the project.

Nowhere else in Latin America have social movements been as influential as they are in Bolivia.

Protests have become the primary means of political communication between the Bolivian citizenry and the government. Past colonisation and the pillaging of natural resources, followed by neoliberal regimes that only widened the inequality gap, brewed discontent, and the Bolivian people began to rebel and fight for a more representative democracy. When rising prices ignited the Gas War, people reacted against the implicit racism, discrimination and a lack of opportunities that the neoliberal economic system laid bare – just as today people are also reacting to the government’s long and punitive regulatory overreach. Nothing is taken for granted, and what has been achieved so far is only the first step towards a long process of change.

To understand this culture of protest, one can look at Bolivia’s past; marching and protesting are the primary way of political expression against the legacy of neoliberal policy. But this expression assumes many different manifestations. And to really grasp what protest means for the Bolivian people, one should look at the everyday protests; what role the syndicates, unions, neighbourhood associations play; and how they are organised.

In Bolivia, it’s natural for any group of people interacting together for any period of time to join a union or form a syndicate. Because an important portion of jobs in Bolivia belong to the informal sector – juice vendors, caseritas, fortune-tellers, shoe-makers, etc. – workers need to unite to be able to defend themselves and have any legitimacy. A lone vendor would have no chance of survival were he not to join the local association. Wherever you live, you are a part of a junta de vecindario. Each structure is then absorbed by a larger structure with its rules and hierarchy that form an invisible framework supporting the life of the city.

La Paz’s Fejuve (Federación de Junta de Vecinos) is precisely that. It comprises 600 neighbourhood associations and acts as a unified voice for its members. Fernando Zegarra, secretary of Fejuve La Paz, says, ‘We are constantly mobilised…. When something is not working right, the community organises itself.’ Fejuve’s role is to improve living conditions, to fill a social need for neighbours to meet and discuss issues, and to organise marches and protests. ‘A lot of the people living in the laderas are from the countryside and have brought their traditions with them. One of them is the apthapi, and, each time they hold a meeting or organise a march, everybody contributes by bringing food and drinks,’ Zegarra says. ‘That’s why organising marches and protests is sustainable.’

These can be localised actions, such as a handful of people asking for a sewer system in their street, or thousands of people mobilising to protest against a decision from the municipality that will affect them all. Fejuve is a complex but well-oiled all-volunteer administrative machine in which elections take place every two years. Meetings are held weekly, and because of a very efficient chain of command in place, marches can be organised in hours. 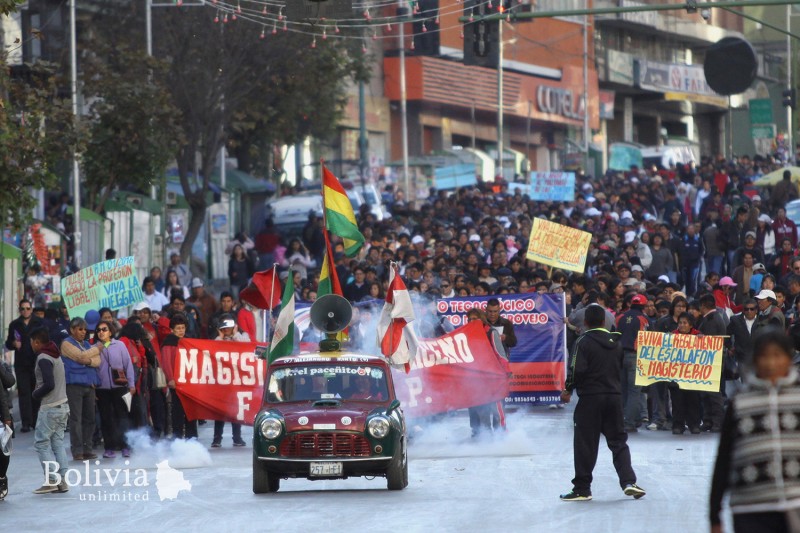 The new penal code was meant to replace the 1972 penal code enacted by the government of dictator Hugo Banzer. It took two years to write and brought some much needed changes to outdated laws. We wrote in BX issue No. 78 about Article 157 of the new code that was going to give access to safe and legal abortions to more women. However, groups protested against a certain number of articles (including the one regarding abortion) and, ultimately, the new penal code was annulled a few days after being enacted. Now the process starts anew and a whole new penal code needs to be agreed on.

15 December 2017: Alvaro Garcia Linera, vice president of Bolivia, enacts the new penal code after it was approved by the Senate a few days earlier.

21 January 2018: President Morales requests the elimination of the entire penal code so that ‘the right wing will stop conspiring and have no arguments to destabilise the country.’ 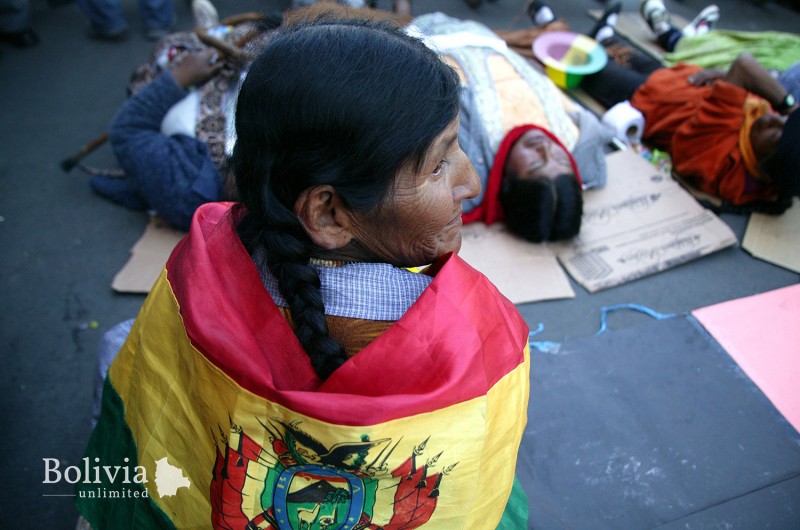 The reasons for protests or roadblocks are as varied as the people organising them. I once encountered a roadblock on the main highway between Cochabamba and Santa Cruz because the man leading it wanted justice for his murdered father. He claimed that a corrupt judge let his father’s killer go free. On my way back from Santa Cruz, another roadblock was organised by tenant farmers whose land was being sold by the land’s owners. The question that comes to mind, especially if you are the one inconvenienced by a roadblock, is: Are they ever successful?

Oftentimes, they are. That men who lost his father may not have managed to send the corrupt judge to jail, but by blocking a main highway for hours, attention was raised, his and the judge’s names were reported on local television, and his father’s memory was honoured. This is the goal. In La Paz, on avenida Perez behind Mercado Lanza, are a handful of caseritas stands. Because of the insecurity in the area, 10 to 15 of these women recently marched in the centre of La Paz to ask for an increased police presence. The next day, they tell us, the police responded, providing more security in the neighbourhood and converting a once-forlorn and crime-ridden area into a secure and bustling commercial center. For these small associations of people, this is the only way to be heard: block a street, paint some banners, ignite some fireworks.

On the other hand, the extraordinary frequency of acts of protest and roadblocks can lead to officials to not take demands seriously, which pushes protesters to escalate their actions until they are heard. On 25 January and then on 7 February 2018, minibus and micro drivers blocked whole sections of La Paz. Enrique Aliaga, from the bus syndicate Eduardo Abaroa, is leading the second 24-hour roadblock. Protesting against the city’s new, more modern buses, he’s asking for more transparency and support from the municipality: ‘We are being discriminated against, our roads are in terrible condition, the PumaKatari buses have better conditions than us,’ Aliaga says. These drivers are intent on continuing their protest until something is done. ‘If they don’t hear us, next time it will be 48 hours, and then 72 hours, until it’s an indefinite roadblock,’ Aliaga says.

Ultimately, protesting fills many functions. It can be practical: asking for a specific need. It can be political: The residents of Calle 21 of Calacoto asking for their street’s name to be changed to ‘21F No’ in a show of support for the 2016 referendum and in protest of the Constitutional Court’s decision (now residents in Cochabamba and El Alto are also asking for a similar change). But the protest is always social, creating a safe space for Bolivians to express themselves and uniting a group of people in a common fight. Bolivia’s political future may be uncertain, the country may be divided and people might be tired of the constant delays and inconveniences caused by roadblocks and strikes, but these are the expression of a democracy. They serve a very specific purpose and fill a vital role that allows the nation to breathe and react.