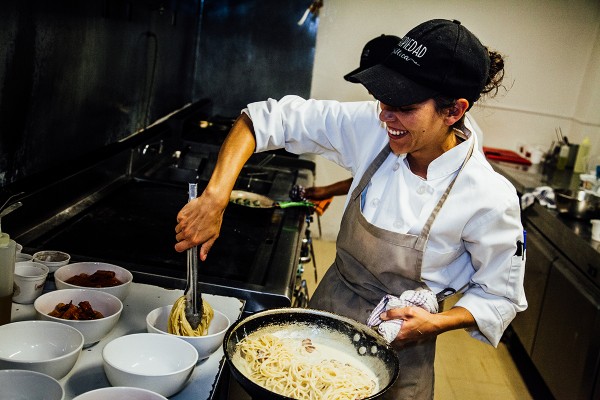 The restaurant that welcomes everyone

‘I used to be a girl scout,’ Gabriela tells me. ‘We did a lot of camps, and I used to love cooking for everyone. I used to cook with my grandma too. . . I just fell more and more in love with it.’

The rustic appearance of the restaurant we are sitting in seems to be a reminder of Gabriela’s camping days, as are the bright yellow flowers on the hand-hewn wooden tables, which were crafted lovingly by the father of a staff member. Such home-made details, alongside large, eye-catching portraits of people enjoying their pasta (including a picture of a man amorously staring at the wheel of cheese clutched in his hands that  made me smile) represents the values of Propiedad Pública: all are equal, all are welcome.
Propiedad Pública focuses on simple, delicious Italian dishes and fantastic cocktails. It is the creation of Gabriela Prudencio, a young chef under thirty who has worked in other popular restaurants in La Paz, including Gustu and vegan mainstay Red Monkey. She decided to open her own restaurant whilst working at Red Monkey, but her love of comforting Italian food began while working in an Italian restaurant in the United States. One of her best experiences at university in New York was sharing a meal with a large group of friends from different countries at the same table. It is the environment of sharing a table, of a cosy welcoming restaurant, that Gabriela believes in.

The idea of having a restaurant open to everyone as ‘Public Property’ solidified for Gabriela after seeing a sign on a cordoned-off plot of land in El Alto saying 'do not enter, private property’. ‘We wanted to create something that was the total opposite, somewhere where everyone was welcome, from every social class, from all cities, friends, family etc.,’ Gabriela explains.

Since the staff at Propiedad Pública is so important to Gabriela, she wants them to feel that it is their home. ‘If they weren't here, this whole thing wouldn’t work,’ she says. ‘It’s a job that requires everyone’s involvement.’ Her team works well together, moving around with orchestrated ease to plate up food, only stopping for an occasional joke. This does not diminish the work Gabriela puts in herself. She takes on every role, leading by example. Unbeknownst to me and my companions, Gabriela had served our table during a previous visit. When I returned, she still remembered my cocktail preferences.

‘We wanted to create somewhere where everyone was welcome, from every social class, from all cities.’ – Gabriela Prudencio

Cocktails at Propiedad Pública are sublime, with interestingly unexpected ingredient combinations such as passion fruit and coffee, or twists on the traditional, such as a kale mojito. On the menu you will find a balanced selection of pastas and salads, well-loved favourites and newer concoctions. I would unquestionably recommend the figs stuffed with light mascarpone cream for dessert, dipped in rich chocolate and sprinkled with orange peel.

‘You have to have a lot of passion for what you’re doing because it takes a lot of time, lots of personal time especially’ she says. ‘If I didn’t love it, I wouldn’t be able to do it. Bit by bit it will blossom.’

Although it takes enormous sacrifice and determination to open a restaurant, Gabriela is optimistic about the future of Bolivian gastronomy. ‘Our products and our food are regaining worth. We are seeing lots of restaurants that are rebranding Bolivian food in a very authentic way, so I think the time to start is right now.’

Gabriela prizes individuality in restauranteurs, telling me how she believes everyone should do things their own way, ‘putting their own personality into their work’. From her perspective, Propiedad Pública represents her as a person. ‘It is who I am and what I like,’ she says. Comparing her welcoming and genuine smile to the philosophy of her restaurant, I’d have to agree.