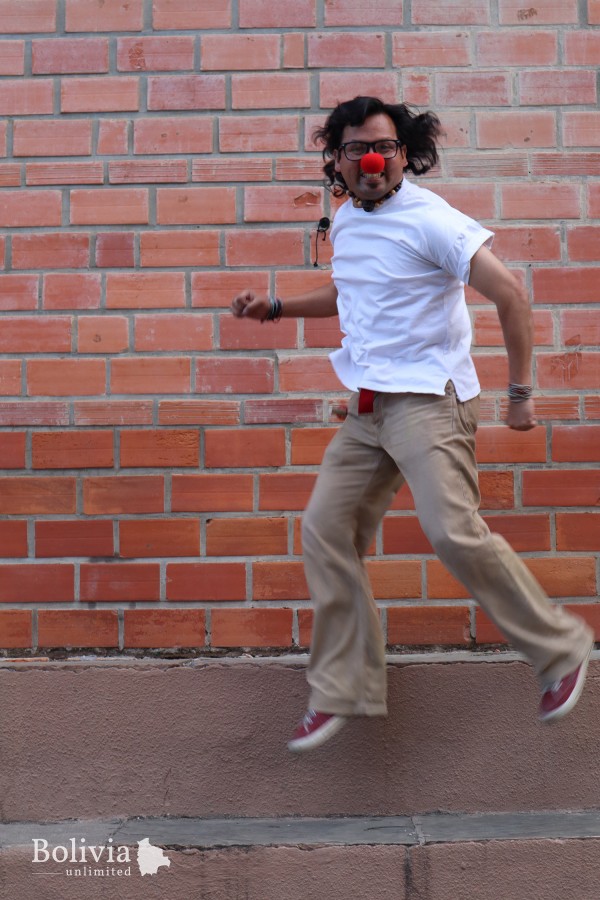 On Christmas Day 1998, the movie Patch Adams was released. Both the movie and the real Hunter ‘Patch’ Adams, an American physician, comedian, social activist, clown, author and founder of the Gesundheit! Institute, have since inspired many doctors to practice a therapy based on happiness and laughing. And here in Bolivia, we have our own Patch Adams, Moisés Callahuara Medrano.

Callahuara specialises in risoterapia, happiness and laughing therapy. He visits hospitals to give joy to patients that are suffering through serious medical issues. He started in 2000 when he started taking clown lessons at the Fundación Doctores de la Alegría, where he eventually became its national coordinator. With the doctores de la Alegria, Callahuara learned the true meaning of the red nose and found the child inside himself. Above all, he discovered the positive impact a clown can have on those who are suffering. But ‘risoterapia is more than just putting on clown’s clothes,’ he said.

Callahuara also founded the Fundación D’Alarte – Alegría Para el Mundo, the first group promoting this kind therapeutic work in Bolivia. Nowadays, the foundation has three teams in the country: in Cochabamba, Santa Cruz and Tarija. Every year, doctores de la alegria are trained. ‘The schooling part is very important,’ Callahuara said. ‘A lot of people think one just has to put on a red nose, but without the appropriate preparation it is easy to get it wrong.’

According to Callahuara, risoterapia offers many benefits. ‘It helps to relieve pain, and promotes the healing process,’ he said. ‘It prevents and helps people cope with emotional and social problems. It also improves our breathing, strengthens the immune system, reduces stress and loneliness, as well as increasing self-esteem.’ Callahuara’s doctores de la alegria work with people who are battling depression, HIV, cancer and other pathologies.

To Callahuara, there is a difference between a payaso (the Spanish word for clown) and his type of clown. ‘A payaso is someone who is going to paint his face, to wear big shoes, colourful wig, etc.,’ he said. ‘The kind of clown who scares everybody.’ But a clown like Callahuara doesn’t need a costume. He uses particular techniques to liberate feelings, to spread joy in people’s lives.

But to make these people laugh, Callahuara said he had to learn to cross a line, to break the ice in order to get through to the person. ‘As soon as I put my red nose, the ice is broken,’ he said. And being a clown allows him to say things he could not say as a non-clown person. With his good humour, Callahuara goes to hospitals and puts a smile on the face of patients in order to make them laugh. And it can be a heartbreaking job. Callahuara spends time with people in dire health situations, and sometimes his patients die.

Callahuara also runs a tea shop in Tarija, aptly named Shadi, which means ‘happiness’ in Farsi. It doubles as a cultural space, ‘where clowns come and where people can go to laugh and feel good, an alternative, artistic, cultural and inclusive space for everyone,’ Callahuara said. ‘It is a space of joy and therapy, where laughing is the invitation card.’ This, ultimately, seems to be the motto of Callahuara’s life.