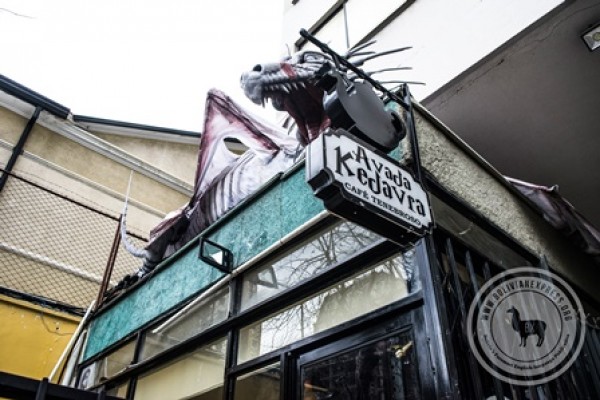 Going Out and Food

Bolivia Joins the Harry Potter Party Around the World

With hundreds of thousands of websites, chat rooms and clubs dedicated to the saga, the famous magical world of Harry Potter is known the world over. Not to be left behind, La Paz has recently seen the grand opening of a new café in the Sopocachi neighbourhood dedicated to this incredibly popular book and film franchise. Avada Kedavra, as the café is known, takes its name from the series’ infamous death curse. At first, that may not sound promising, but we here at Bolivian Express thought we’d try it out and see.

Even before one walks through the door, Avada Kedavra proves itself to be an admiring homage to the novels and films. Outside, a large dragon sits atop the small building, mouth open and baring its teeth, with the café’s name written on a swinging cauldron above the door. Visitors are greeted by a towering life-size figure of Hagrid, Hogwarts’s groundskeeper; across stands the slightly disturbing figure of Voldemort.

'My partner Citlali Rioja and I both adore the saga, and we wanted to pay homage to it in a unique way,' says Hugo Catunta, one of the cafés two proprietors, as he leans over a counter displaying numerous themed mugs, badges and keychains for sale. 'The cafés here in Sopocachi are sophisticated, so we wanted to keep up with that as well.' He says that the drinks, for him, have a touch of magic. 'I really love the butterbeer, and the multijugo potion really tastes magical.'

Strewn across the walls is a mountain of paraphernalia – from a dementor bursting out of a wall to wands stacked behind the counter. Candles hang from the ceiling, and the bathroom is the spitting image of infamous villain Professor Umbridge’s office. Quidditch books and other magical lore sit in glass cases. The pièce de résistance, however, must be the small dressing room in the middle of the café, where appropriate garments await the most fanatic customers; there are robes from each Hogwarts house. Visitors can try them on and take photos of themselves, and even don the famous ‘sorting hat’ to top the outfit off.

The pièce de résistance must be the small dressing room in the middle, where appropriate garments await the most fanatic customers.

This place, without a doubt, is a haven for ‘Potterheads’. But for those who aren’t so enamoured with the franchise, there is a limited but growing menu. There are the usual suspects, the coffees and frappuccinos, but as a café dedicated to a magical world, more exciting things are on offer. Our personal recommendation is the Phoenix, a refreshing drink based on Professor Dumbledore’s bird; listed simply as a juice of mango and forest fruits, it seems so much more, as a rich, cloudy mix of red, yellow and orange in the glass gives it a touch of magic. To top it all off, there is a small piece of dry ice on top of every goblet. (Yes, drinks are served in goblets.)

'Each recipe has its own unique little touch, to make it more fun. And of course, the theme makes it all the more unique,' Hugo says. And we agree. Although this café is still in its infancy, it is already a booming business; our first attempt at entering it was thwarted by a line for tables that was almost to the door. Avada Kedavra is magically satisfying the Harry Potter super-fans of Bolivia.

Avada Kedavra Café is located on Calle Guachalla, between Avenida Sánchez Lima and Avenida 20 de Octubre in the Sopocachi neighbourhood of La Paz.