Portrait of Marcelo Quiroga Santa Cruz, a symbol of Bolivia’s fight for democracy 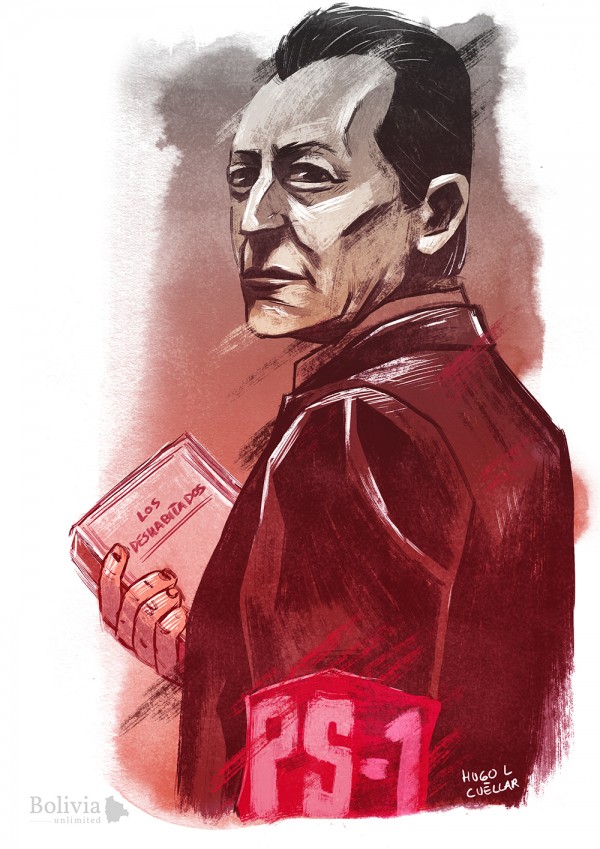 In the 1980s, during the dictatorships of Luis García Meza and Luis Arce Gómez, many important leaders and figures of Bolivian civil society were disappeared or assassinated, such as the Jesuit priest Luís Espinal and the writer and socialist leader Marcelo Quiroga Santa Cruz. Espinal was brutally murdered. Quiroga was captured, tortured and killed, his remains still missing today.

I heard of Marcelo Quiroga for the first time coming from our old kitchen radio. This was followed by my father’s comments: ‘He was brave and he fought for democracy’ and ‘He is a real revolutionary.’ At the time I didn’t fully understand what my father meant, but I could detect a melancholic tone of courage in his voice when he said that. I was studying at university then, and I understood that Quiroga wasn’t just a name, but that he represented the fight for democracy. His face was reproduced on flyers and posters. Like Ernesto ‘Che’ Guevara, Quiroga’s name and visage was used as a symbol to infuse a revolutionary spirit at all sorts of political events. I finally began to understand Quiroga’s message, though, when I read his novel Los deshabitados, a grandiose book in which he captures perfectly the subjective traits of his characters and describes what he called ‘the representation of the disorientation of the aimless middle classes.’

Quiroga was a multifaceted man whose interests touched literature, journalism and cinema, but who was caught in the web of politics. Born in Cochabamba to a father who worked for Simón Iturri Patiño (a tin baron who was one of the wealthiest men in the world at the time), Quiroga studied law, philosophy and literature. He was passionate about the arts and listened to the music of Beethoven and read the poetry of Góngora. In 1969, Quiroga was appointed as head of Bolivia’s Ministry of Energy and Hydrocarbons under President Alfredo Ovando, and he fought to nationalise the US-based Gulf Oil Company. Later, in 1971, he founded the Partido Socialista (PS-1), which participated in the general elections of 1978, 1979 and 1980. The PS-1 won five seats in 1979 and 11 in 1980. As a member of Parliament, Quiroga worked to bring ex-dictator Gen. Hugo Banzer Suárez to justice, a fight that would determine the course of his life (and death). ‘The 1980s were hard times; money was devalued, leftist leaders were attacked, the military acted in total impunity—we [the people] were the only ones who suffered,’ says Don Gerardo, a newspaper seller since 1970 who remembers those days as a time of hardship and repression.

On 17 July 1980, Gen. Luis García Meza, who had previously publicly threatened Quiroga, orchestrated a coup d’état. On that day, the CONADE (Bolivian National Council for the Defense of Democracy) met, bringing together all the country’s leaders who were standing for democracy. The opportunity was too good for the putschists. Paramilitaries interrupted the meeting with gunshots, wounding and capturing the leaders, amongst them Quiroga. They were taken to the army headquarters, where they were tortured for days, and Quiroga was killed. Meanwhile, in the Palacio Quemado, President Lidia Gueiler Tejada was forced to sign her resignation. ‘I had to renounce, my ministers were imprisoned, paramilitaries were in the streets…. And they had to humiliate me further by making me read my resignation as I was sobbing,’ remembers the ex-president in the documentary Siglo XX, by Carlos Mesa (himself president of Bolivia from 2003 to 2005).

Photographic records show signs of torture on Quiroga’s body, which, despite his family’s petition, was never released. On 2 September 1980, Quiroga’s family received a letter from Col. Luis Arce Gómez, one of the participants in the coup, informing them that the whereabouts of his body were unknown. Years later, when reading this, I could barely contain my indignation thinking that Quiroga never received a proper burial. During Bolivia’s many dictatorships, ‘desaparecido’ was one of the most difficult words for a family to live with, but one of the most frequently used. Only Quiroga’s watch and ring were returned to his family.

Regarding the people responsible for the crime, and according to information the family had gathered, the mastermind behind his assassination was Gen. Hugo Banzer Suarez, carried out by the assassin Froilán ‘El Killer’ Molina, arrested in 2016. Molina worked in the security forces of Banzer’s wife. There are different theories and versions about what happened, but the latest one, according to an interview with Luis Arce Gómez, now serving time in the Chonchocoro jail, is that Banzer himself admitted that Quiroga’s body was buried on the grounds of his Hacienda Santa Clara. Banzer reportedly bragged that the man who tried to bring him to a criminal trial was now lying under his feet.

Quiroga was assassinated as he was reaching the apotheosis of his political potential. A lucid man and an outstanding speaker, he was committed to the Bolivian people’s interests – and the mark he left is indelible.

Throughout its history, Bolivia has fought against many enemies of democracy. Acts of terror and repression by military dictatorships, not only in Bolivia but in other Latin American countries, were commonplace. And Marcelo Quiroga, who died fighting for a democratic ideal, is but one of many revolutionary martyrs who are now part of Latin America’s genetic makeup. The Bolivian people, who have suffered and had their blood shed due of the indifference or malice of autocrats, are the heirs of those martyrs.

With time, Bolivians have become inured to the sounds of daily protests, to blockaded streets. I like to think that somehow this is a good thing, that these are not futile fights, and that the people who face it all are able to stand for the common good.