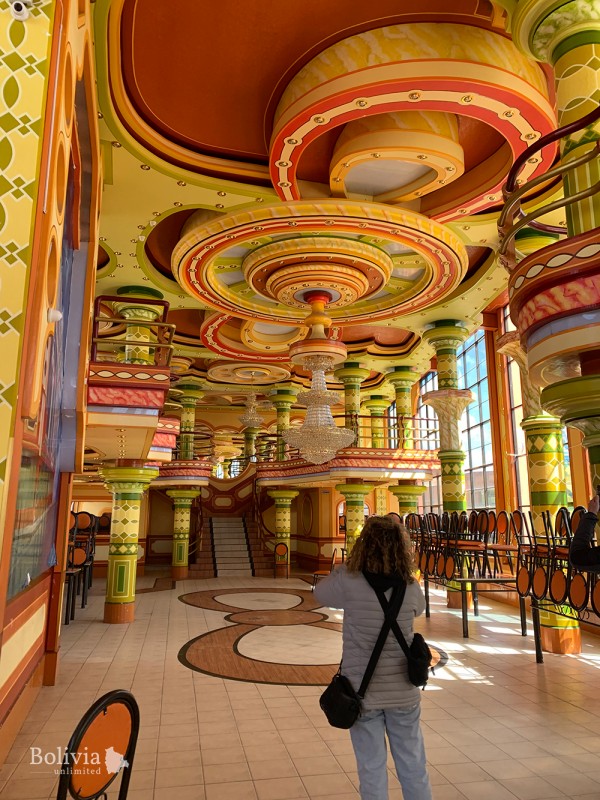 The Arts, Urban living and Culture

Freddy Mamani’s cholets are brought to life through cinematic art

For two weeks in July of this year, the UK’s Architectural Association Visiting School programme called on the La Paz metropolitan region for a fourth consecutive year, with this visit’s focus being ‘Portable Cholets.’ Freddy Mamani’s cholets, the vibrantly colourful mansions which adorn the hardscrabble streets of El Alto, were used as the inspiration for a piece of wearable performance architecture. With the help of some of the most prominent artistic figures in La Paz and El Alto, the cohort of students sought to transform the works of one of Bolivia’s most striking contemporary architects into masks and clothing which would form the basis of a performance exploring anthropomorphism in architecture. For anyone with the notion of architecture as an art restricted to the design of buildings, this innovative project will eradicate any such misconception. 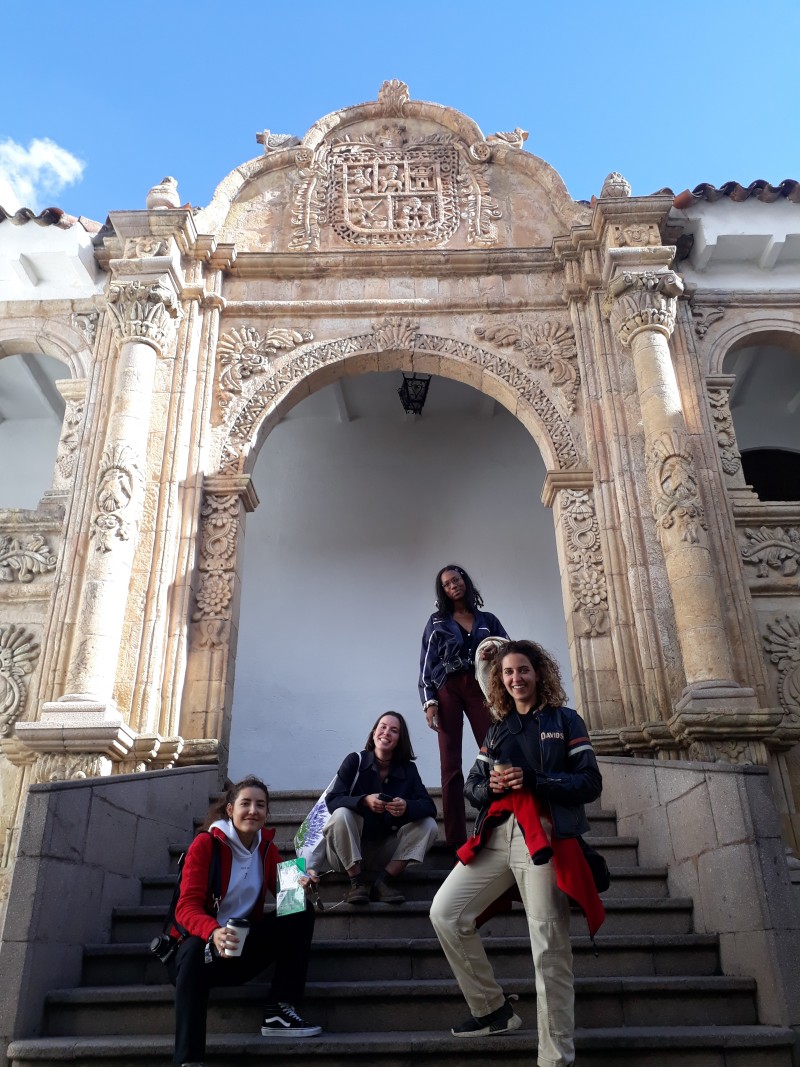 Freddy Mamani’s work is distinct in its rejection of the conventional styles generally preferred by Bolivian architects trained in the Western tradition. Instead, Mamani’s cholets fuse futuristic elements with indigenous symbolism, such as the vibrant colours of the traditional Aymara aguayo dress and the geometrics of the ancient site of Tiwanaku, to construct truly original designs. Mamani’s architectural style is distinct in its power to express the identity of the Andean people, reifying fundamental aspects of their culture and traditions in the form of the cholets.

Just as Mamani’s work defies convention, the project sought to utilise a fresh approach to explore the power of architecture to reflect the culture of the people who inhabit it, and more specifically the questions of identity and folklore that dominate the work of Freddy Mamani. For Sabrina Morreale, the architect that led the project alongside Lorenzo Perri, this method was crucial to success. ‘We try to do architecture not through books or studying,’ she said, ‘but through an intervention on site.’ 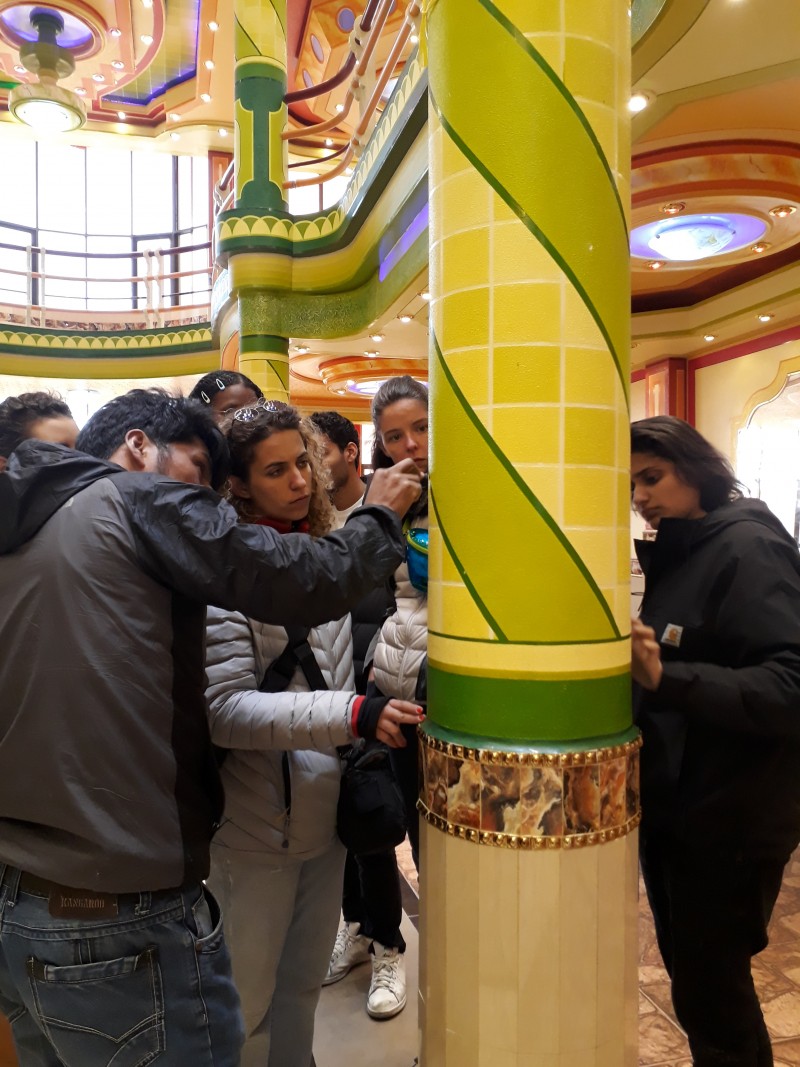 The fortnight-long programme began with a private screening of the 2018 Bolivian film Averno, following which the students were given the opportunity to discuss the award-winning production with the film’s writer and director, Marcos Loayza. Just as Mamani’s cholets explore Andean indigneous identity in structural form, Loayza’s film explores Andean indigenous beliefs and conceptions of identity through an immersive, hypnagogic narrative in the setting of La Paz after dark. The meeting with Loayza proved an invaluable opportunity for the students to learn about the meaning behind the symbols which are scattered throughout Averno and to find inspiration for their own final production. With the final goal of creating a short film depicting the portable cholets in a piece of performance art, the meeting provided a huge opportunity to gain a director’s insight into how abstract concepts and symbols can best be captured on film.

When asked where they might seek inspiration for their own short film, Loayza confided to the students that ‘there is always a trigger – it could be a drawing, a space, a location, a character or an idea.’ For the participants in the Visiting School programme, it was a visit to a cholet currently under construction that provided the spark. Having been given a guided tour by Mamani himself, it was this striking location that was chosen as the setting for the performance that would be filmed and finally screened at the end of the two weeks. For Jasmine Abu Hamdan, a current student at the Architectural Association School of Architecture, the incomplete cholet ‘had a particular charm to it, with the rendered elaborate ceilings contrasting the bare walls.’ 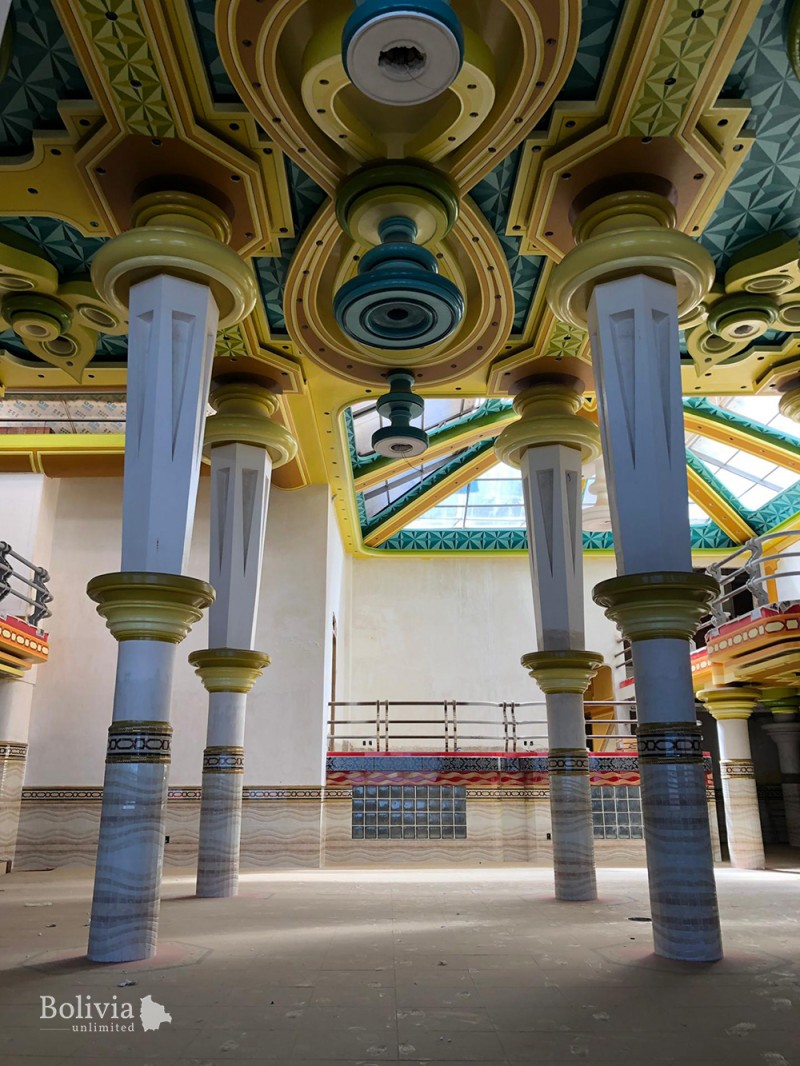 With the location settled and a storyboard for the performance created, the craftwork for the masks and costumes for the film took place in the Bunker, an art studio near the La Paz bus terminal which began life as an alternative theatre hall. Using an eclectic range of materials sourced locally in the city – from a rear-view mirror of a car to an inflated disposable glove, among other disparate objects – a collection of surreal masks was created to be used as a focal point for the closing scene. Following the completion of the apparel for the main character, which included the painting of its sprawling, geometrically patterned dress and the welding together of its pyramidic skeleton, crafting was complete. With just two days to perform and film in the cholet, the Visiting School team and guest director Marcos Loayza set to work on the final piece. 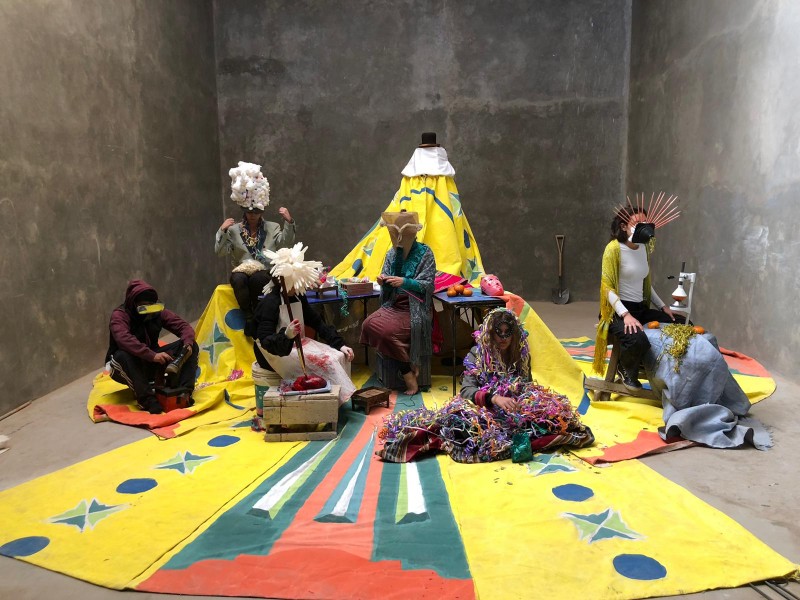 The film begins with a stunning overview of El Alto at first light amidst the backdrop of Illimani’s towering, snow-covered peaks. Following the journey of the main character from the streets of El Alto up to the heights of the cholet, the building’s incomplete, glassless structure is manipulated to capture stunning snapshots of the ascending figure. The turning point occurs when the main character, a blank, pyramid-shaped character whose form can be recognised as a symbolic representation of the earth goddess Pachamama, eventually unveils its vibrant dress underneath the lime and gold ceiling of the cholet. At this point the film transforms into a surreal spectacle, with the collection of spectacular masks amidst a dimly lit setting appearing to take inspiration from the bizarre and wonderful characters which populate the dark underworld in Loayza’s Averno.

The programme stayed true to Mamani’s own vision of embodying identity in art.

With a final screening and exhibition of the film and the masks, the Visiting School’s fourth La Paz–El Alto residency was brought to its conclusion. For Jasmine Abu Hamdan, the programme was a compelling experience. ‘Both La Paz and El Alto are surreal cities with surreal urban and cultural aspects,’ she said. ‘It particularly interested me seeing how rituals can inform the architecture that a community inhabits.’ In its exploration of complex concepts of symbolism and culture through performance, the Visiting School programme stayed true to Mamani’s own vision of embodying identity in art. 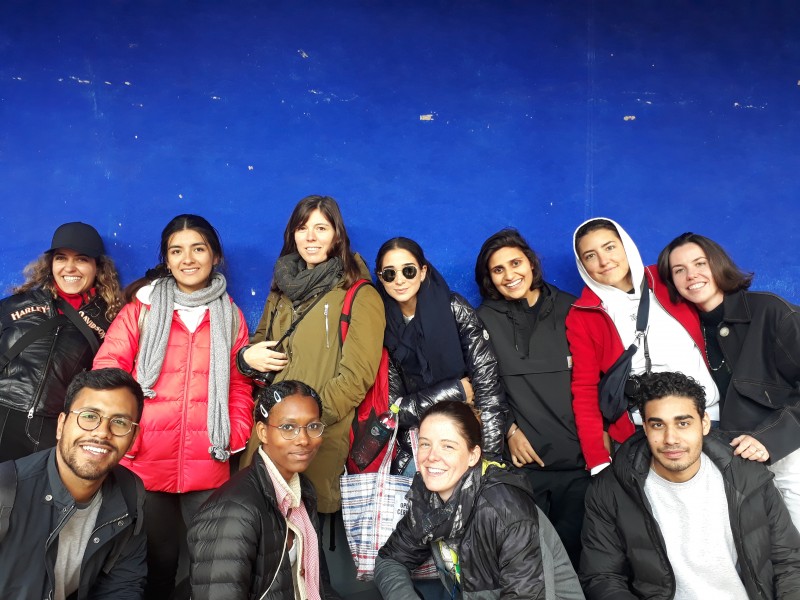