Ploughing In The Sea: The Legacy of Bolivar - 6 de Agosto 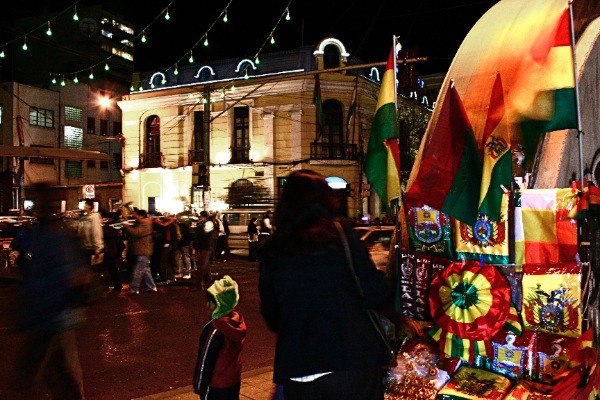 In the Zona Sopocachi of La Paz, things are peculiarly quiet. The normally chaotic traffic is calm, and pedestrians cross the road with relative ease. Shops are shuttered up, cafes are draped in red, yellow and green, and the rusty smell of a barbeque drifts over a garden wall. The famously hectic city is having a break. It is 6th August, and a national holiday, for, one hundred and eighty-five years ago today, and after a sixteen year war, Simón Bolívar declared Bolivia’s independence.

As I stroll up towards the Prado, kids are having ice-creams, their parents sitting relaxedly in the sun, and a couple walks hand in hand, in matching Bolivian national football shirts. It may be of some surprise, therefore, that of all the people enjoying a day off work, the attractive television reporter and accompanying cameraman coming down the street pick out the only other person who is (nominally) working. They ask me if I’m having fun, where I’ve been, and I respond as best I can, in broken Spanish. It becomes quickly clear that maybe, just maybe, I am not the most authoritative person to articulate the nation’s patriotic sentiment on what is perhaps the most important holiday in the Bolivian calendar. I try to explain that my Spanish isn’t very good, but she presses on. The questions get more complicated, and the conversation stalls further. Eventually, my questioner despairingly implores, “Repeat after me: Viva Bolivia!”

I oblige, but it starts me wondering. Was it really necessary for those words to come out the mouth of an ignorant, illiterate gringo? The predominance of white skin tones in media and advertising was covered in an article last issue, but if the very day of a country’s liberation from colonialist oppressors isn’t a day to actually ask Bolivians their own opinion, then I’m not sure what is. Bolivar is often described as “South America’s George Washington” for his role in bringing democracy and self-determination to the continent, but progress on this front has in fact been painfully slow.

After independence, Bolivia frequently suffered under corrupt governments, usually led by military leaders. Independence certainly did not mark the liberation of the majority of native Bolivians. Universal suffrage was not realised until the MNR revolution of 1952, and, symbolic of their exclusion from the political process, only from this date onwards were indigenous Bolivians allowed to enter the Plaza Murillo. The struggle did not end here, the MNR was soon replaced by a military junta.

Looking at Bolivian history, it is easy to get pessimistic about the development of the state in a post-colonial setting. Even Bolívar himself was far from optimistic. “All we have gained is independence, and we have gained it at the cost of everything else... Those who have toiled for liberty in South America have ploughed in the sea. Our America will fall into the hands of vulgar tyrants.” His words have, unfortunately, proved largely prophetic. Whatever the political problems Evo Morales faces, the significance of his election (if it needed proving) is only highlighted by this context. To his worst critics, he may be a vulgar tyrant, but, to paraphrase Woody Allen, at least he’s for the left, which is good news for native Bolivians. And in time, attractive television reporters may ask them about their country’s independence. For they’re bound to have a damn sight more to say about it than I do.