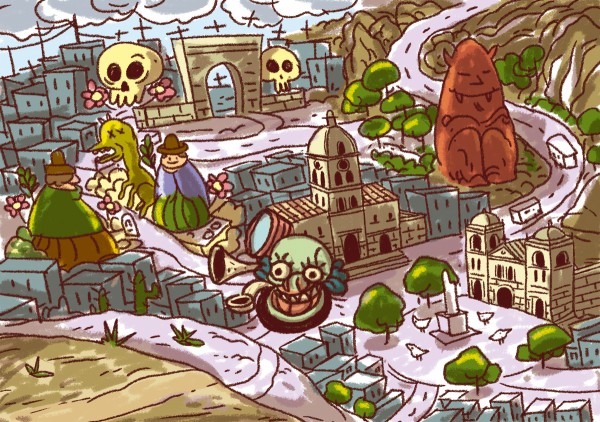 Spirituality comes in many shapes and forms, and that is certainly the case in La Paz. To show off the variety of religious systems found here, we have created a map showing seven of the most intriguing sacred places in the city. To help us with the map, we sought help from Milton Eyzaguirre Morales, director of outreach at Bolivia’s National Museum of Ethnography and Folklore, who explained some of the history and traditions of each location.

When we first asked Milton about famous spiritual areas in La Paz, he responded with apus, the spirits of mountains, and apachetas, the spirits of smaller hills. In the past, apus and apachetas were worshipped by the Aymara. During August, the month of the Pachamama—Mother Nature—the hills are activated, and people give offerings of llama foetuses to bring economic luck, success in studying or business, and a healthy family.

Milton said, “‘These spiritual places are being forgotten, but you will still notice a stash of wine, bread, and fruit in some buses, which drivers use to make blessings to the ancestors when they drive over the hills.”’

A few blocks off the Prado lies Plaza Murillo, the city’s main square and the location of the National Congress and the Presidential Palace. It is also home to the Metropolitan Cathedral of Nuestra Señora de La Paz. This area was once a sacred site, where offerings were made to the Pachamama. After the Spanish arrived, churches, plazas, and government buildings were built over sacred Andean locations. In 2005, when excavators were working in the area in preparation for the new national folklore museum, they found human bones in the ground, leading archaeologists to believe the site was once a sacred cemetery.

Every year on the 8th of November, people flock to the graves of their ancestors at the General Cemetery with hundreds of skulls, known as ñatitas (usually stolen and then bought at a black market), and ask the dead to protect and help them during harvest. This festival marks the beginning of the ‘Season of the Dead’. To celebrate this, people extravagantly decorate the skulls,; give them cigarettes, alcohol, and coca leaves,; and then rebury them.

Milton said, “‘The dead are seen differently in Andean context. Here they are seen as spirits coming to earth to protect the people and bless a successful harvest,”. said Milton.’

Most tourists into La Paz take a trip to the beautiful San Francisco church, but most may not notice the pillars at the front of the church that rise up out of two stone heads in the ground. These heads are linked to the Andean traditions of the dead helping the harvest, growth, and farming, and were built into the church to represent the Catholic Church working together with Andean traditions.

Five minutes by car up the freeway to El Alto, there’s a rock structure about 15 metres in diameter and four metres high. This place, Nnicknamed ‘The Devil’s Corner’, this is a site for spiritual animal offerings, such as dogs, cats, and llamas, to the Pachamama. Traditional offerings at this curve began when thieves and robbers started to come here to ask for forgiveness for their transgressions.

Although it is nicknamed ‘The Devil’s Corner’, Milton explained, “‘petitioners originally gave offerings to the supay—translating to ’the dead’ in Aymara. But when the Spanish heard them they thought they were making offerings to the devil.”’ There was confusion between devil and death!

Uphill from Sagarnaga, the central tourist market in La Paz, lies a slightly more unusual bazaar. At the Mercado de Hechecería, or Witches’ Market, you can find anything from coca leaves to llama foetuses, even trinkets and talismans, all meant to appease the gods of the sun, moon, and earth. Here, women tend the products they sell, as they have done for generations. The market began when women from Oruro travelled to sell plants and animals, starting a system of informal commerce.

Milton said, ‘It should actually be called the women’s market—again, there was a confusion between Spanish and Andean terms.’

Translating to ‘Festival of the Great Power’,  the Gran Poder is a religious celebration paying homage to Jesus Christ. This dramatic celebration features thousands of folkloric dancers parading down the sprawling streets, flaunting their colourful, extravagant costumes. Although Gran Poder has developed and changed over the decades, many Aymaran traditions remain, making it a one-of-a-kind event. Every year, more than 30,000 dancers take to the streets and dance along a six-kilometre route, beginning at Parque Ben Hur and ending at Avenida Simon Bolívar. 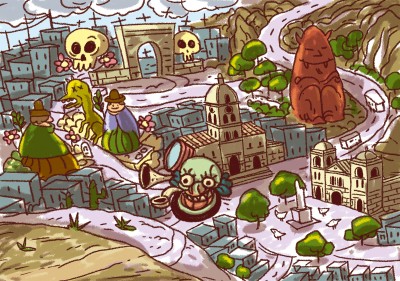