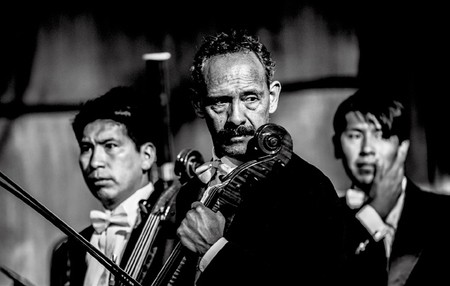 I sit here writing this review with Dark Side of the Moon pounding through my headphones, inspired by the performance last night. Last night’s show can only be described as incredible; bursting with passion, flare, and underlined with excellent musical control. 'Pink Floyd Sinfónico' was performed on stage at the home of Bolivia's National Symphonic Orchestra in la Paz, the Centro Sinfónico. The dramatic setting was accentuated by meticulous lightning, creating an almost baroque atmosphere. This contrast between old and new was the key to the success of the evening as a whole; the contemporary songs and images of Pink Floyd being performed by a classically-trained symphonic orchestra resulted in an unexpected richness. This richness extended beyond the sound of the music into the imagery and soul of the evening.

Before the evening even started it was clear to me that this was THE place to be on this Thursday evening in La Paz; whether you look at the Facebook group showing scores of people lamenting the fact they couldn't get tickets, or the fact the performance had been extended by 4 nights already. For those who did have tickets there was an anxious tension in the air, with people arriving early and queuing outside to ensure their successful entrance.
I wasn’t sure what to expect. I had listened to the recordings of the Royal Philharmonic Orchestra (RPO) playing Pink Floyd, but I had no experience of a live performance such as this. The director Flavio Machicado kindly agreed to an interview before the show. I asked him about any similarities between these performances and any other classical productions of Pink Floyd. He explained that this production was completely original, and came from the imagination of its creator Alexis Trepp who commissioned the production of the scores (including over a dozen original arrangements), and thus prevented it being contaminated by outside influences. His musical style and interpretation can be clearly seen across the production, making it is a completely unique piece of work.

Having gone back and re-listened to the Royal Philharmonic recording, I feel that while there are some similarities, the differences between the two are more profound. Firstly, the RPO does sound more like a musical accompaniment, with the vocals taking very much a back seat in most songs but the quality of the playing and the use of string section in place of some of the guitar solos is exquisite. In comparison, the Bolivian performance of Pink Floyd songs was much more ‘in your face’, a true spectacle of lights along with Floyd’s signature circular projection of video imagery. Furthermore, the vocalists were the key to the success of many of the songs, bringing together the band and the orchestra in one harmonious sound. Trepp’s production showed a greater variety in its arrangements, and his influence and exuberance is evident almost everywhere, helping really bring the show to life.
I watched the first half of the show from the ground-level seating, where you could see everything from the concentration lines of the musicians to the flourishes of Trepp's fluorescent drumsticks. This half consisted of a tribute of 'Dark Side of the Moon' played in order, but reworked with the orchestra. The whole of the first half was incredibly atmospheric with rousing highs and gentle lows in the music combining perfectly to leave me in an almost constant state of goosebumps.

For the second half we moved to the mezzanine level and had a great view overlooking the whole orchestra in its glory. This half consisted of a number of other Pink Floyd hits, and contained my favourite song of the night. ‘Wish you were here’ was hauntingly beautiful and accented perfectly with the harmonies from the female vocalists. It was a final slow down for the audience before the big finale, and as much as I love the huge sound of Pink Floyd and their anthems there was something infectious about this performance of ‘Wish you Were Here’ which I will remember every time it comes on.
It is clear that this production is in large part a reflection of Trepp’s dream, yet it took many people to put it together, organise, and pull off with such success. Machicado mentioned that there were a number of businesses that believed in the project ‘before listening to a single rift’ because they believed in the reputation of the Symphonic Orchestra. Thus, this incredible feat was a success due in a large part to the force of nature that is Alexis Trepp, as well as the orchestra and its supporters.

So what does this mean for the future? Well in the immediate future the National Symphonic Orchestra will return to performing the classics, but there are always challenges to take on, which have the potential of expanding the audience beyond the usual classical-music goers. Machicado hinted at one such possible production, which involves trying to rescue music from the 19th Century and the historic wars of Bolivia’s painful past. Whatever comes next, it’s clear the orchestra have set a high bar for themselves. To retain their standard and success with a range of audiences, they will have to continue to prove that classical, modern and traditional music can be bridged in innovative ways in Bolivia.