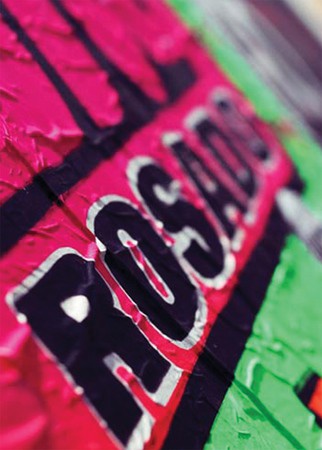 Many people who pass through this city of contrasts, mysteries and peculiarities miss certain details that are registered yet seldom consciously noticed. All it takes is stopping to analyse every sticker, sign and ornament in your path. Pay attention to the shape, aesthetic, origin and raison d’être of each of these curios. You will discover a new city with secret messages about its people, culture and emerging trends that reveal its ever-evolving identity.
To make this exercise worthwhile, you must look with inquisitive eyes and suspend all judgements. When dealing with urban aesthetics, all manner of malapropisms, kitsch ornaments, pastiches of unknown origins and deliberate chaos intertwine. The line between the ugly and the beautiful is blurred to make room for the richness of the disharmony that defines La Paz’s cityscape.

It is advisable to begin this exercise in a minibus. It shouldn’t be too hard to find a sticker with that monstrously anthropomorphic cartoon bird, Condorito, stating that spitting is absolutely prohibited.

On the left of the bus driver you may well find the Oración del Chofer, set in a background of multicoloured gradients. You will see warning signs, from the prudential to the moralistic: ‘if you get out late, it is not the driver’s fault’,‘it is better to lose a minute in life than life in a minute’.

If you’re lucky enough to be sitting next to the driver at the front, you will be able to see a colourful fabric hanging in the windscreen; with ornaments and figures of saints or football teams — vestiges of the car’s challa in Copacabana and testaments to the driver’s devotion to the eponymous Virgin.

Keep your eyes open wide throughout this journey. Peer out of the window and read the messages on the backs of other minibuses or micros. The sayings captured on them come in varied colours, typographies and disastrously sublime spelling permutations. ‘Why don’t you tell me with a kiss’, ‘Your envy is my blessing’,‘Don’t follow me because I too am lost’ are some common messages. These phrases and their colours distill the fleeting essences of society.

Should you be fortunate enough, you will encounter the historic Micro, ‘El Inmortal’, or the famous ‘Superman’; which literally (sic) flew several metres without major incident. You may also learn of the improbable stories captured by the so-called ‘logotipeados’, which capture a range of beliefs ranging from political visions to the most banal of life’s problems. One driver comments that the face of Osama Bin Laden, painted alongside the Twin Towers and the face of Che Guevara on the back of his Micro, reminds us ‘how a hero went against imperialism’.
As Fernando Navia would say “This type of design -Gráfica Popular- is an extraordinary phenomenon that takes place from the individuality of each human being and, as such, is an inherent part of the human condition. It brings out various aspects of a culture by incorporating local elements and combining them with foreign –yet perfectly adopted– materials and references”. In its own way, design distills the spirit and worldviews of groups from all social segments. The identity and sense of belonging of a people finds its expression with visual eloquence.