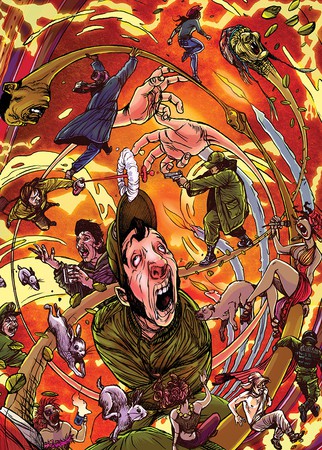 At the turn of the 20th century, writing in Bolivia almost exclusively tackled surface issues like campesino life and later the globalisation of the nation. ‘Periférica Boulevard’ by Adolfo Cárdenas, runner-up in the Premio Nacional de Novelas (2005), republished last year with accompanying illustrations –see timeline across page–, has helped to turn the tides of Bolivian literature. Alex Walker meets Cárdenas to discuss ‘Periférica’ and the rise of the underworld in mainstream writing.

Emergence of the Underworld
Jaime Saenz (1921-86)
Someone Cárdenas cites as a significant influence, Saenz introduced the idea of the other world. He suggests that decadence – particularly alcoholism – allows us to transcend our metronomic, monotonous quotidian to a new, intriguing existence.

Victor Hugo Viscarra (1958-2006)
Viscarra’s literature reflects his own life on the margins of society. Struggling with alcoholism, drugs and crime, he eschewed literary conventions creating a manner of expression moulded to describe the underworld that enveloped him.

Juan Pablo Piñeiro (1979-)
Arguably Piñeiro’s most important work, ‘Cuando Sara Chura Despierte’ is set during the Fiesta del Gran Poder and depicts a city in chaos, dealing with the uncomfortable merging of indigenous and modern cultures.

Reading Periférica Boulevard reminds me of watching Mathieu Kassovitz’s film La Haîne, a story that follows the frustrated existence of three young misfits, living on the margins of society. Throughout the film, these characters struggle against the police corruption and violence that defines the vicious circle of their existence. The parallel that stands out between Periférica and La Haîne, though, is their use of language. Where ‘La Haîne’ enacts the tension between Paris and its underworld by combining traditional French with Argot –slang developed and used in parisian ghettos– Periférica Boulevard. adopts a similarly innovative dialogue: a fusion of Spanish, slang and indigenous language.

Periférica Boulevard is a murder mystery set on the outskirts of La Paz. Two policemen arrive at the scene of the crime to discover that a person has been killed at a gigantic music hall. The victim is none other than EL REY, a rocker and self-proclaimed king of these underworlds. All the evidence points to an infamous subterranean character known as EL LOBO, known for his graffiti rivalry with EL REY. The two policemen embark on a chase across the city in pursuit of the single eye witness of the crime. The persecution ends in a shocking revelation (spoiler alert): the policeman (lieutenant Villalobos) is none other than El Lobo himself. But beyond being a murder mystery, Periférica Boulevard is a map of the cultural La Paz and its margins, as well as an insight into the (sometimes) incomprehensible jargon of these polyphonic urban tribes.

When I suggest to Adolfo Cárdenas, in a café overlooking Plaza Avaroa, that, to understand Periférica, it must be read out loud, he shakes his head: 'If you open your ears, you will hear this language everywhere'. Cárdenas, who describes himself as a ‘relator-investigador’ (researching narrator), is as creative as he is perceptive. In fact, he claims that none of Periférica Boulevard comes from his own personal experience; that 70% is fiction and 30% is formed from the world he discovered in his investigation. When talking about this world, Cárdenas explains his surprise at the contradictions he found: abandoned wild dogs becoming 'pets of a community', the 'semi-clandestine double existence' of several bars and clubs, and how 'different worlds' would spring up from nowhere when the sun went down.

When discussing the effects of his work, however, Cárdenas expresses frustration at the laborious, slow development of Bolivian literature: 'almost nobody in Bolivia tries to innovate, they just follow the trends of the time'. The theme of graffiti in Periférica can be viewed as allegorical of Cárdenas’ disillusion with the restrictions of literature. Indeed, he describes graffiti as ‘one of the freest and most anarchic forms of communication; limitless because it is clandestine and anonymous’. True, these clandestine voices offer a more accurate reflection of a society than history books or tourist brochures because they do not come with a self-serving agenda: history is, after all, written by the winners and promoted by such brochures. Cárdenas, instead, writes to bring these underworlds, marginalised by society and literature into mainstream focus: it is both a piece of fiction and of journalism. Marcos Loayza, film director of the bolivian classic Cuestión de Fé, believes that Periférica Boulevard is Bolivia’s ‘finest book’ of the last 30 years, explaining that ‘somehow, the things that are on the margins, excluded by society, better illustrate its fears, prejudices and anxieties than those at its centre’.

Loayza, though, believes that the arts are 'slowly regressing', attributing this to a poor 'awareness of our cultural heritage' and citing the examples of people stealing from churches or dismantling metal sculptures to sell as scrap. For a country with such a well-documented revolutionary history, it is paradoxical, then, that the arts are not evolving. Cárdenas has an explanation for this, too. He claims that 'political protest is too connected: literature becomes purely criticism'. Whilst this may be somewhat true, I cannot help but feel that, more often than not, literature does flourish in the face of adversity – take Isabel Allende’s ‘La casa de los espiritús’, for example. Written when exiled to Venezuela following the assassination of her uncle, President Salvador Allende, at the hands of the Pinochet military coup of 1973; she uses first person narrative interjections by Esteban Trueba, the novel’s antagonist, to expose the political corruption, machismo and neglect of the campesinos that pervaded Chile at the time. Successful literature, then, is able to engage with the problems within its society.

Described by shvoong.com as ‘disjointed, babelic, difficult and illegible, essential and easily one of the ten best bolivian novels of all time’, Periférica Boulevard triumphs –according to Cárdenas– in ‘unveiling the quotidian language of the peripheries’. This, though, is blatant over-modesty. While its language does play a role in bringing the voices of the underworld into mainstream focus, there is more to Periférica Boulevard than that. Cárdenas, small of stature with and with a glinting smile, takes a final sip from his cafecito and stands up to leave, he glances back and gives a wave as he steps out onto the Plaza. The silent revolutionary is swept up into the faceless throng until the sun descends and the underworld awakens once more.