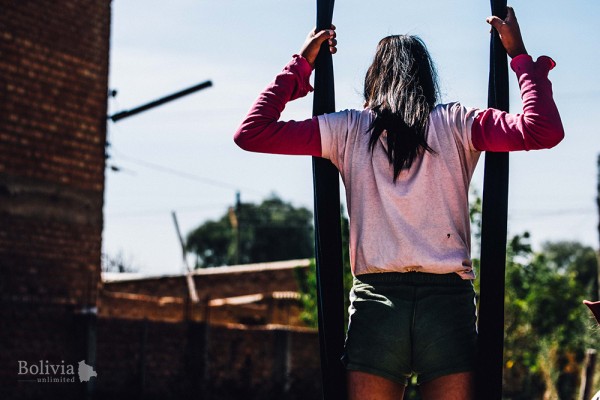 The streets of the residential neighborhood Montenegro in Cochabamba are dusty, sparse and sprawling. At sunrise, the vast expanse of land is punctuated only by the silhouettes of children heading to school, to work, or to the streets. And a few of them are heading to the Performing Life centre.

Performing Life is an NGO based in Bolivia that teaches performing arts to children living in poverty in Cochabamba, combining professional circus and music training with social education programmes.  The social circus programme began in 2005 when the founder, John Connell, was left to fend for himself as a foreigner in Bolivia and noticed someone special: Tania. In the brief stop of traffic at a red light, he watched Tania wander into the road, diablos in hand, juggle astonishingly, hoping for a tip from one of the drivers. He realised that children like Tania made far more money performing than begging on the streets, and thus the social circus aspect of Performing Life was born.

As I walk into the Performing Life centre, I am joined by one of the youngest participants, Matthias, whose mum spends the morning cooking a free meal for all of the children at the centre. Matthias joins a group warm-up before the social education programme, which is his first class of the day. Rosa, a volunteer from the United States working with the children, tells me how the class fills in the gaps left by the state education system. Children are taught about gender equality, alternatives to aggression and are encouraged to grow in ambition.

‘Damaging machismo is socially ingrained into these children from a young age,’ Rosa says, ‘and we try to help them unlearn it.’ She tells me that volunteering in Cochabamba ‘is the hardest thing she’s ever done’, as access to higher education for children from low income backgrounds is incredibly difficult. Teaching the children to be ambitious only helps to overcome one of the hurdles in between them and higher opportunities.

After the social education class, the core event of the morning begins as the children move on to another class with circus director Amy Booth. With her are two circus skills practitioners, who started out as students at the centre: Tania and Carlos. Amy scales a 6-metre-high structure to tie up silks for the practice, as unicycles, diablos and juggling balls are dragged out of the main room and into the sun. Laughter echoes through the courtyard, as Matthias giggles hanging upside down from one of the silk ropes. Diablos flash against the light as they fly from person to person. ‘Circus lies at the intersection between sport and performance,’ Amy tells me, as we watch Tania demonstrate a complicated juggling move for one of the children. ‘Whilst it helps the children to be physically healthy, it also aids in self-expression, and provides a practical skill for the children to earn money for their families,’ she explains.

The children perform astonishing solo routines, but teamwork is an essential part of their education. One of the most noticeable changes Amy has seen in children who have been attending the programme for a long time is an enormous growth in their interpersonal relations, maximising their ability to be selfless, thoughtful and confident in engaging with others.

Tania and Carlos have both been coming to the Performing Life centre for 11 years. ‘The discipline I learned through circus helped me realise I wanted to go to university and eventually join the elite police training academy,’ Tania tells me. Carlos, on the other hand, has travelled all across South America juggling on the streets, before coming home to help teach at the centre. ‘There are not a lot of options for poor children in Cochabamba,’ he says. ‘They often end up in gangs as young as 13, and many of them don’t have parents to look after them.’  Performing Life has managed to carve out a tiny haven in Cochabamba, where new doors are opened and new opportunities can be reached.

Lunch follows soon after circus skills class, and during the meal Tania asks all the students for improvements and criticisms of the day’s activities, reinforcing their sense of community. This community is wider than just one neighbourhood of Cochabamba, however, as Performing Life also conducts a music programme on the other side of town, teaching music performance to some of the city’s most vulnerable children. The reach of the organisation is always extending. Amy and Irene Soria Lopez, the national director of Performing Life, have even larger dreams for both programmes.

Amy dreams of turning the circus skills programme into a professional school, and Irene dreams of uniting the different groups in the music programme to create a 200-strong orchestra that plays with recycled instruments. Inspiration for these ideas has come from similar projects across South America. A music school in Argentina has managed to create the orchestra Irene pines for, and social circus programmes are becoming popular across Bolivia, with one having recently started in El Alto.

Performing Life is breathing new life into performing arts by combining it with a heart for community development. The results are breathtaking.