PASANAKU - Saving With the Heart 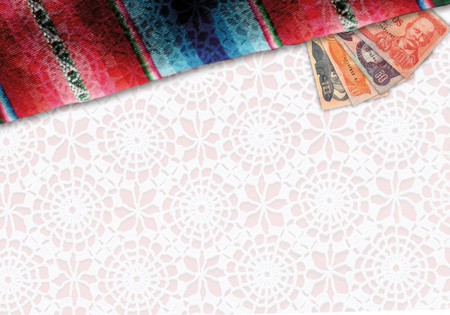 Pasanaku is a classic example of Ayni, the traditional practice of mutual support in indigenous communities. The word Pasanaku means ‘passes between us’, which is indicative of the sentiment of reciprocity that underpins the game. In the Andean world, the community is the base of society, coming before individuals who from birth are embedded in a network of complex relationships. Reciprocity is therefore paramount, as it engenders mutual respect, justice and solidarity. But how far can we begin to consider economic reciprocity as not only cultural tradition but as a fundamental economic strategy?

In Pasanaku you play with those who you trust—your friends or your family. From my perspective at least, the coupling of finance and trust is crucial and, conversely, its absence deeply troubling. 5 years on from the Credit Crunch, its painful learnings still resonate in our society. Distressing photographs come to mind depicting of desperate people queuing in the cold outside their bank hoping for reassurance that their savings would be, well, safe. The media brimmed with tales of poor souls who withdrew their life savings in sad brown envelopes, due to the fear that they would be the next to lose out. Comparisons were constantly drawn between the present and the 1929 Wall Street Crash, and as a naïve 14 year old sitting in front of the telly wearing a crudely un-funny slogan t-shirt and lacking any tangible knowledge of Economics—or even my own bank account—I was terrified that we had entered the next Great Depression. Were there to be Breadlines and Hoovervilles arriving in my leafy middle-class corner of South London? More importantly, would I ever be able to afford the UGG boots and Abercrombie Hoodies that my puerile 2008 dreams were made of? I vividly remember the media frenzy of the Credit Crunch and the fear it instilled in my parents. Still now I am confronting the lingering anxiety it left looming over my generation.

As a society we entrusted our savings to our banks and bankers, who in turn played games with our money and lost. Bankers and stockbrokers were quickly seen as reckless gamblers who had no consideration or compassion for those whose money they were playing with. So surely we could learn a lot from Pasanaku, as a financial system that values the importance of trust above all else.

And yet in England we hate to mix finance and friendship. In our culture of individualism one’s financial situation is not something one speaks about. Doing so remains taboo and stigmatised. Even in marriage, some debts remain hidden and irresponsible spending is too shameful to confess, even to a spouse. Admitting to my closest friend at University how far I have eaten (or drank, as the case may be) into my overdraft would be excruciating. However in Pasanaku, you confess your finances and accept the support of people in your social circle. Every Pasanaku player I spoke to admitted that they will readily bend the rules if a member of their group needs the money at that time. The obligation only lasts as long as the cycle, and as a microfinance strategy it is based entirely on trust—no written contracts are exchanged—and is kept completely separate from the banks or government.

La Paz is a city where traditional Andean cultures are in full synchrony and confusion with what some of us recognise as the modern world; where a stern-faced Cholita crowned by a hat balancing askew (on plaits that swing by her waist, adorned in kaleidoscopic layers of skirts), will sell you an iPhone charger. Pasanaku has thrived in La Paz, escaping its status as a cultural relic and surviving to the present day as a widespread saving strategy and social activity. The many Pasanaku groups that are played in workplaces are a vivid example. I met Eulogio Callisava, at work on the 3rd floor of a skyscraper in the centre of the metropolis. As a player of Pasanaku for the last 3 years, he confirms that it is a common activity across the city’s offices.

Teresa Conesa has been playing Pasanaku for 6 years now, in a group composed of other mothers from her son’s school. She sees the social dimension as the most fundamental aspect of Pasanaku. Unlike other social arrangements, Pasanaku is an obligation and a commitment and because money is involved she knows that her guests won’t find an excuse not to turn up. So the players are knowingly not only investing their money but also investing in spending time with loved ones. Teresa firmly views Pasanaku as an obligation although 'maybe because you do it with your friends it’s fun… an obligation mixed with fun' and she eventually admits that it is definitely more fun than about the financial dimension involved. Giggling, she recalls one Pasanaku group that became an even grander occasion by playing in fancy dress.

The stereotype is that Pasanaku is a Ladies game. When I asked Teresa about this, she suggests that it is mainly women who want to have a night away from their husbands and children. She knows of some women who have a different Pasanaku every night as an escape from their family life, and their husbands can’t argue with it because it’s a serious financial commitment. Telma Cuentas believes it is more popular amongst women maybe because women are more concerned about saving money than men are. Telma’s perspective is certainly in line with theories which state that the hyper-masculine culture of banking and finance being partly to blame for the financial crash. The same theories that recently prompted the British Member of Parliament Tessa Jowell to proclaim, on live television and rather spontaneously, that had more women been in charge of big banks, then the financial crisis would never have happened. The game I observed was pointedly women only. As if he were an endangered and elusive species, I only caught a glimpse of the husband arriving at home. He himself only managed to drop off his briefcase before disappearing upstairs—without dinner—and we returned to no man’s land.

A pasanaku group I spoke to meets once a month. I was able to join them one
evening in the living room of a beautiful house in Zona Sur (La Paz’s Chelsea, notorious for a distinct accent, preppy teenagers, and a prevailing Western influence on consumption and aesthetics). A log fire glows in the corner while the ladies are buoyed up upon a powder-blue sofa set. The women themselves are as immaculate as the lounge they are set in. Their hair is neatly coiffed; nails impeccably manicured and in an act of adamantine female solidarity they parade in stiletto heels, undeterred by Zona Sur’s tumultuous pavements. Immediately, they admit that the game is mainly an excuse to gossip, 'That’s it!' one woman howls. And she’s proven right; over the course of the evening the amount of money that ‘passes between’ the women pales in comparison to the expanse of gossip that flies from their lips. They talk about children; theirs, other people’s—who’s married, who’s put on weight and who will 'only be cute, but never handsome'. Over a lavishly arranged dinner, when someone begins to lament the onslaught of ageing they shriek with laughter about Botox becoming an appropriate and well-deserved trophy for a lady approaching 50. While the others are distracted, one woman is singled out by a head of golden highlights for the privilege of speaking in hushed tones about some inscrutable scandal. For these women the social dimension of Pasanaku is its allure.

My initial scepticism couldn’t quite swallow that this game could be so successful when only based on trust. What about humanity’s collective and uncompromising fundamental selfishness? Surely, over the past centuries this ancestral system has been exploited by the occasional flake or usurper. My probing questions on this point are met with blank stares, or nervous laughter. Hazy stories are recalled of a friend who had heard of someone who had left the country with all the group’s money. It is agreed that it can be awkward when people owe each other money. Some anecdotes involve people forgetting their hosting duties and thus betraying the code of reciprocity, serving biscuits and crisps found in an uninspiring last-minute supermarket dash.

Despite my best efforts to undermine the ancient Andean wisdom, I didn’t manage to do so. There is a lesson to be taken from this ancestral game. Perhaps just the sentiment that Teresa pointed out, when she emphasised how important it is that you trust the people you play with and that you have fun, 'otherwise it is a waste of time and money'. Perhaps if we make sure we play with people we love and trust, and ensure we are doing so for fun, then we can all be victors in the games we play.