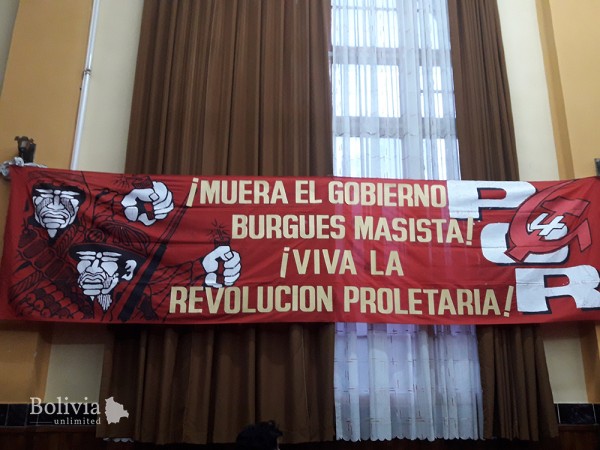 The old guard of Bolivian Trotskyism

Since 1825, there have been 88 governments in Bolivia, with an average of 2.2 years per government. Chronic political instability has become somewhat intrinsic to the country over the past century with modern Bolivian history seeing the people take matters into their own hands to produce change. Irrespective of their alliance, be it with worker unions, the petty bourgeoisie, intellectuals or the military, people have strived for change. Bolivia’s political landscape has been transformed by the 1952 National Revolution and the military coups that plagued the mid- to late 20th century. An ideology that played a central role in the 1952 National Revolution is the Marxist doctrine imported from the 1917 Russian Revolution that profoundly influenced Bolivian politics throughout the last century.

Trotskyism, the doctrine of the Russian revolutionary Leon Trotsky, has had an especially influential role in the guidance of Bolivia’s political direction. Manuel Gemio, a Bolivian Trotskyist, intellectual and expert in economics and planning, tells me, ‘The role of Trotskyism in Bolivia is very important. It transcends its history. You can’t understand the history of Bolivia without Trotskyism.’ In the past century, the arrival of political parties such as the Partido Obrero Revolucionario (POR) introduced Bolivia to Trotskyism in 1935 (before communism arrived in the 1950s) and helped garner support for the 1952 National Revolution, changing the face of Bolivia’s politics.

Trotsky was assassinated 12 years before the 1952 National Revolution, but his belief that workers should determine the direction of progress in society resonated in the hearts of Bolivian workers. This, coupled with the theory of permanent revolution and the notion that socialism cannot truly work unless it is enacted globally, is the foundation of a Bolivian Marxist doctrine known as the Theses of Pulacayo. The Theses of Pulacayo was Bolivia’s guidebook to Trotskyism and laid the foundation for revolutions to come. It was established by a federation of miners in 1946, with Guillermo Lora – the poster boy for Trotskyism in Bolivia – among them.

The 1952 National Revolution initiated the nationalisation of the mines, introduced land reform and allowed for universal suffrage, three important principles of the workers’ movement. This was a fight started by the Bolivian bourgeoisie in alliance with the Movimiento Nacionalista Revolucionario (MNR). But the revolution was virtually on its knees when a coalition between miners, the MNR and the POR saved the movement. The miners stormed the capital alongside armed civilians and successfully sieged La Paz, emerging as heroes of the revolution.

Although the revolution was saved, the consequences of these events were a huge failure for the POR. MNR only used the alliance to build support for its cause, ignoring the POR after seizing power. The POR thereafter declined due to a split among members who supported the MNR and those who didn’t, as well as competition from other left-wing parties that introduced Marxist doctrines, such as Maoism and Marxism-Leninism. The failures of the Guevarista guerillas in the 1960s further weakened their position.

Today, these hardened Trotskyists have been overshadowed by Evo Morales and the incumbent Movimiento al Socialismo (MAS), a party that claims to be of the same Trotskyist heritage and where many Trotskyists of the old guard have moved. Although MAS draws on socialist policies, the active members of POR aren’t convinced. At the POR’s centenary celebration of the Russian Revolution, various worker representatives made this view clear. ‘What has the Indio [Evo] done?’, an Aymaran farmers’ union representative yelled, convinced of the limited impact of Morales’s time in office. ‘He has made it worse, he brought hunger and despair,’ he continued. The MAS rose from the ashes of the Sánchez de Lozada government, which brutally suppressed coca farmers, miners and indigenous people. The MAS attained power with the help of workers’ unions that had more than half a century of experience. The current government is seen by some as revolutionary, but the old leftist guard isn’t satisfied.

Outcry was rife at a recent event commemorating the centenary of the Russian Revolution. The scene was awash with adoration for Lenin, Trotsky and the iconic Guillermo Lora, their figures immortalised in banners. Farmers, miners and industrial workers alike loudly voiced their dismay towards the MAS government. Further discontent was evident in the blood-red banners calling for the forceful resignation of ‘socialist pretenders’. ‘We will fight for democracy,’ a miner said on stage, ‘fight against the oppression and the lies!’ People in the crowd raised their fists and sang the party’s anthems. However, despite the apparent unity and crowded attendance at the event, the POR is a party whose base comprises ageing academics, plays no political role today, hasn’t managed to renew itself, and still parrots Trotsky’s very same words.

The POR is certain of its goals (which haven’t changed since 1935 and include seeing Trotskyism come into fruition, following the example of the Bolshevik Revolution), but it is unclear whether the party can actually achieve them. With a question mark looming over the organisation, its lack of new, younger members provide an eyehole into its future. According to Jamie Jesus Grajeda García, executive secretary of a local student federation, today’s youth does not take much of an interest in politics. ‘The issue is that young people are more focussed on themselves than on the betterment of the country,’ Grajeda says. The global trend of diminishing youth engagement in politics is disconcerting for the POR. In the past, the party’s support network was made up of workers and Bolivian youth impassioned by the plea for change. But that support is dwindling. 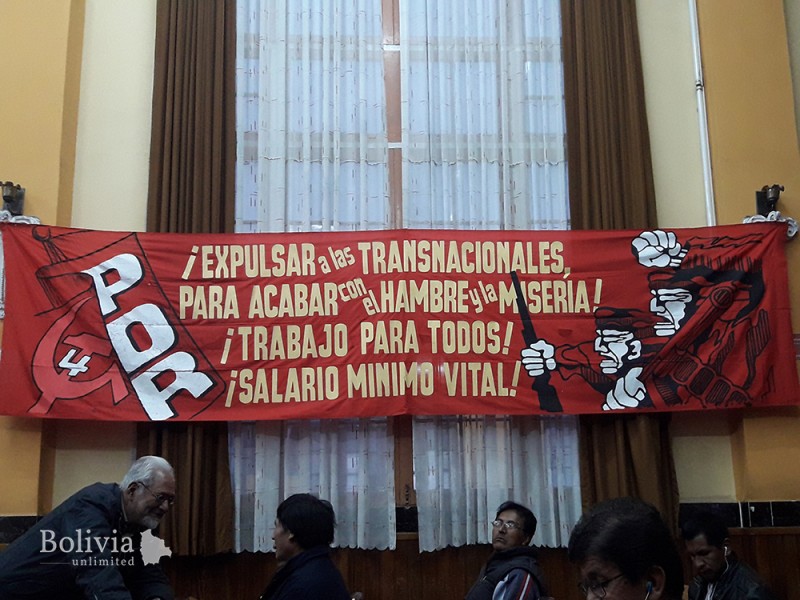 ‘You can’t understand the history of Bolivia without Trotskyism.’

Whilst the party often questions its future, it remains unquestionable that POR’s original objective, its permanent fight to revolutionise the system, is the only thing that keeps it alive. This mood of disgruntledness resonating from the theatre halls hosting the party’s conferences was well-timed. With Evo Morales pushing his reelection as MAS’s presidential candidate, a call for revision and change is prudent due to the discontent sowed by the familiar foe of past authoritarianism. Moreover, this period coincides with a centenary which acts as a time of reflection and a moment to look back at the Russian Revolution as an example. For old-school Trotskyists, it was also a time for envisioning an epic comeback for the party, like ‘the aged bear’ that revived and became a powerhouse for the people – a vision that ensnares the hopeful workers of Bolivia who still feel so hopelessly disenfranchised.