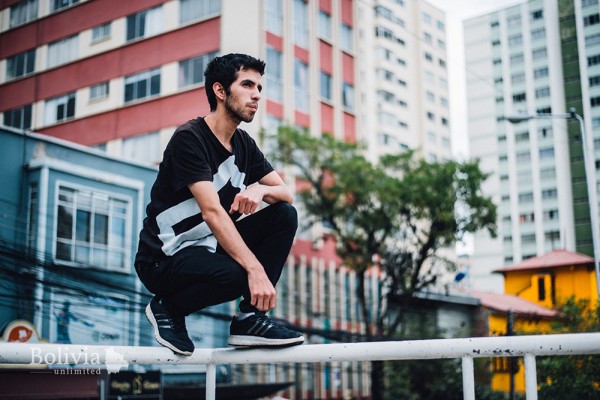 Sports and Going Out

The drive and philosophy of the city’s fearless tracers

Prepare, run, jump, soar, reach, kick, grab knees and…’Ahhh!’: I smash face-first into the crashmat, emitting an embarrassing squeal. Swallowing my pride, I slope over to my instructor.

‘Look, Sophia, we’re doing the Webster, that’s a front-flip, but you’re turning and attempting a different move, called the Side,’ he says. ‘Oh, sorry,’ I reply, to which he quickly retorts, ‘No, it’s fine! I think you’re better at the Side. Watch and copy.’

He approaches the mat at a trot and effortlessly floats up into the air, spinning around a couple of times and landing softly on his feet. The entire class bursts into guffaws at the idea of me imitating such grace, myself included.

This is my third parkour class at the Spazio gym in Sopocachi, and whilst I am improving, the journey ahead is long and peppered with bruises. Nevertheless, when I found out that my local gym gave parkour classes, no one could have kept me away. La Paz never fails to deliver when it comes to enthralling juxtapositions, such as an underground subculture sport being taught at a mainstream (and pretty high-end) gym.

The discipline of parkour has undertaken a long and transformative voyage to arrive in the plazas of La Paz. It started as a French military training technique, parcours du combattant. It was then developed by David Belle, the son of a military man, who brought parkour to fame through gravity-defying stunts and his tight-knit community. Henceforward, the sport follows the traditional narrative of a subculture: the development of principles, a philosophy, in-fighting, a split between orthodox and globally-focused practitioners and finally, a nudge into the mainstream.

However, parkour did not arrive in Bolivia by jumping and vaulting across the Atlantic, nor did its philosophy take root through the evangelisation tactics of missionaries. Parkour hitched a ride to the heart of South America on the back of social networks. Within the past decade a community has arisen from provocative YouTube videos, gifting the country several parkour and freerunning teams, a handful of academies and a one-hundred-strong community in La Paz.

‘It’s more of lifestyle than a sport.’

One such practising paceño is my instructor, Mauricio Pizarro, a 24-year-old architecture student and a member of No Limits, Bolivia’s first freerunning and parkour collective. His journey started just under three years ago when he came across a few videos on YouTube that sparked his interest. Pizarro then found the Parkour La Paz group on Facebook and was thrilled to discover that it was a community of parkour practitioners or ‘tracers.’ These people helped him develop skills as well as a new attitude towards life. ‘Parkour is not solely a physical sport,’ Pizarro is keen to impress upon me, ‘it’s also mental and spiritual. To pull off a jump you have to be physically, spiritually and mentally ready for it.’

The philosophy of parkour is one of overcoming fears, competing with oneself rather than with others and seeing obstacles as opportunities for creativity and growth. It’s a way of changing the way you see and interact with your surroundings. When you are surrounded by the spectacularly twisted, layered and chaotic urban landscape of La Paz, the chances to get creative are seemingly infinite. Pizarro’s tone quickens and he begins to gesture enthusiastically as his two fields of expertise collide. ‘Geologically,’ he says, ‘[La Paz] is a city of ups and downs which has forced the architecture to adapt. Before the teleférico you’d have to go down thousands of little stairs, slopes and…’ he trails off, waving his hands in excitement at the wealth of parkour-perfect areas in the city.

The defining factors of Pizarro’s approach to parkour seem to be inclusivity and spirituality. The former inspires the open-to-all access of his classes and his strong sense of personal competition, while the spirituality is present in his words, his story and his resolve. When he started out he was going through a difficult stage of his life and his personal practice and the parkour community helped him surpass his fears. ‘I associate [parkour] a lot with life. If you’re confronted with a barrier, you don’t avoid it you cross it,’ he says. With this mentality it is easy to see how a person can be empowered; no longer a victim to their surroundings but an actor, interacting with and exploiting their environment.

I vault myself onto the gym horse, put out two hands and roll off the second obstacle, landing stably on my two feet. Looking down, I see two new shiny bruises on my knees from where I mistimed my jumps, and I haven’t even made it out of the gym yet. Nevertheless, I am inspired by the dedication, openness and the values of La Paz’s tracers. Perhaps this admiration will transcend into jumping over stray dogs and hurdling kiosks as I trace my way around Sopocachi.