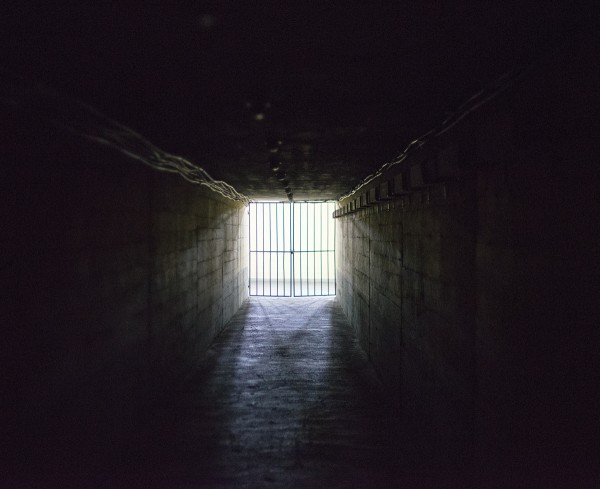 "We emerge out onto the pitch and Topacio immediately hears footsteps."

‘Ghosts?’ asks our taxi driver. ‘Go to Puente de Las Americas’. Unfortunately, we have just gone over it. It’s nearing 11 pm on a Monday night, and we’re crossing La Paz from Plaza Isabel la Catolica to the working-class neighborhood of Miraflores. We are looking for the city’s apparent supernatural centres and our next stop is the Estadio Hernando Siles. It is a building viewed by many as deeply haunted, after the viral video of an apparition and the testimony of an unnamed architect.

Huddled on the steps of Pollos Copacabana opposite La Paz’s principal football stadium, we wait an hour for Leao Armas and Topacio Falcon, the ghost hunting power couple of Santa Cruz. Finally, a taxi draws up and out they come.

The first thing one notices about Leao Armas is a thirst for credibility. Bundling out the cab with his wife, Topacio Falcon, he hauls two pieces of luggage. Topacio carries a dainty smaller one, containing $8,000 worth of top of the range, ghost-busting equipment. They present themselves replete with caps and shirts emblazoned with the logo from a certain Bill Murray film.

Quickly, Leao launches into a quasi-soliloquy and says he studied exorcism, lived around the Vatican for two years and did a job in New York, where they picked up their high range gear. He informs us it is a family business and that his youngest child has ‘the sense’. Then he offers a plan for the night and gives us a clear paranormal timetable, a lay of the land. Ghosts appear from midnight until 3 am, whilst demons appear from that point till sunrise. Mirrors are portals, we learn. Suicides make ghosts.

And, perhaps, they are not wrong. On our first night’s adventure, the stadium lies still, green blinds covering dark windows. No guard is in sight. Knocking on the iron bars of Gate 2 with his ring, Leao calls out. ‘Señor! Hola! Señor?’ A muffled thud replies. He tries again. ‘Señor! Hola! Senoooor?’ Again a muffled thud. Turning to us with eyes wide, he thrusts out his arm. ‘Look!’ Enthralled, we all do. Even in the half-darkness, goose bumps are clearly visible on his arm. ‘It’s not scientific,’ he says. ‘But its shows something is going on.’

At every iron-barred gate, Leao and Topacio stop and peer before Leao repeats his call. As we approach Gate 9, Topacio stops. She points out movements beyond the bars. Interest piqued, we all similarly stop and look. There is definitely something there, but what? We nervously reach the bars. Leao repeats his call, ‘Hola! Señor! Señor?’ Now, suddenly unsure of ourselves, we peer into the darkness. Some of us realise it is nothing more than our shadows moving, but Topacio is convinced. Gripping the bars, she shines a torch into the dark abyss. Only when we move off is she prepared to let go.

Unable to get in on our first night, we spend the interior of the next week trying. A few baffled officials and a plastic trophy-cum-thank-you-present later, we stand outside Gate 4 the following Friday. The mood is different; the couple says they have mentally prepared themselves for a big night. Leao, having called on the protection of both Pachamama and God, furiously chews coca leaves as we watch the silhouette of a caretaker limp into view. Topacio has previously filmed an introduction to the ghost hunt, in which Leao invites the camera to accompany us on our exploration.

Once inside, the guard leads us to one of the changing rooms before departing with a tired shrug. We descend to the tunnel and into semi-darkness. ‘It’s colder here,’ says Topacio, referring either to paranormal presences or atmospheric conditions 4,000m above sea level at midnight. We emerge out onto the pitch and Topacio immediately hears footsteps. She scans the empty stands with a torch, illuminating the Coca Cola signs, but nothing more.

Having set up the motion sensor and duly triggered it themselves, we embark on a lap of the stadium. We are promised a guide and meet a bleary-eyed Hector at Gate 9. He leads us back out onto the pitch and points out another stand but discredits Leao’s haunting theories. We walk through the concourses of the east stand and Leao’s EMF meter (a device that measures electro-magnetic fields and, according to ghost hunters, paranormal activity) starts to go wild. He runs ahead, searching nooks and crannies for any sign of an apparition.

"Even in the half-darkness, goose bumps are clearly visible on his arm"

As we walk back down to pitch level, Leao senses we are not alone. The EMF meter is going crazy, registering maximum readings on the arbitrary scale. Leao summons us into a circle and requests that the demons reveal themselves. The pair take photos, saying the camera might pick something up, but the supernatural seems to think it has done enough. The readings die. The rain begins. We trickle out of the stadium and leave the ghosts behind.

La Paz is an old city. It is rife with superstition and beliefs in the supernatural. We came to Estadio Hernando Siles hoping to create our own but left with little more than memories of a bleeping EMF detector and a moonlit walk through a deserted stadium.