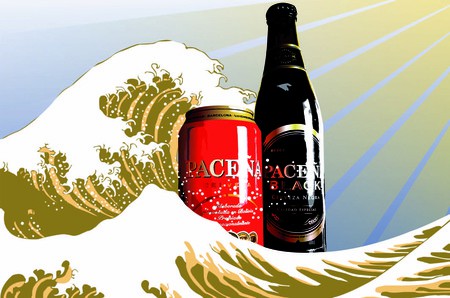 Paceña is the top brand in Bolivia. The red, white and gold logo can be seen nearly everywhere you look. In addition to the everyday press, an enthusiastic marketing team oversees that Paceña’s image is kept fresh with participation in music festivals, sporting events and trendy night culture. With the supremacy that this beer holds over the market in Bolivia, it is no wonder that it is one of the biggest employers and exporters in the country.

The people responsible for this great success are Cervecería Boliviana Nacional (or CBN). And Paceña is not the only string to their bow. They are the producers of Huari, Bock, Taquiña, Ducal, Astra, Maltín, Margarett and Imperial Beer. With such a vast collection it is no wonder they hold ninety percent of the market on home ground. The brewery lies to the north west of the city, near the old train station. It would have been a welcome sight to the foreigners and locals alike as they entered the city back when the brewery was opened in 1886. Nowadays the station might be abandoned but the brewery has expanded extensively. CBN has plants all over the country, and the central brewery itself has undergone a great deal of modernization and now the cutting edge facility towers over the highway heading up to El Alto.

The place is a hive of activity, not only with the trucks bringing in cereals and hops from the various harvests all over the country, but with builders buzzing away with construction and refurbishment. The modernization is ongoing, and the constant changes showed this is a company that takes growth and improvement very seriously.

The name ‘Paceña’ comes from the adjective to describe a resident of La Paz . From its beginnings the Paceña brand had close ties with the city, leading consumers of the beer to be called Paceños, and from this the name ‘Paceña’ was born.

Paceña’s method of brewery is of course a closely guarded secret, but it follows the same basic routine of every lager. Cereals and hops are mixed with water and boiled to produce a malty flavour. After being centrifuged to separate the solids yeast is added to begin the fermentation process, and lastly a stringent filtering process begins to ensure the beer has its crystal clarity, gentle carbonation and perfect flavour.

This year CBN celebrates its 125th anniversary. Things were very different back in the fledgling years; Paceña would have been bottled by hand and distributed by mule-driven carts about the city. Supposedly these mules were specially trained to stop at each shop allowing the beer to be unloaded quickly and efficiently. Things have certainly moved on since. The packaging facility is state of the art and bottles the product at a staggering pace. Recycled bottles are brought in and removed – with one slick maneuver the machine manages to empty and discard plastic creates in two seconds. Next the bottles are cleaned with what looks like one of the most complicated dishwasher- slash -conveyor belts ever designed. If any problem with the bottle is discovered by the high speed scanner it is immediately discarded. With each bottle checked it can then be filled. This is possibly the most impressive part of the process, as 40,000 litres of fresh beer is sealed into the bottles every minute!

Paceña’s pedigree is not without recognition. Over the years they have secured many awards for their efforts. To date they have over 50, nationally and internationally. The one they are most proud of is the World Selection Maya Award for best Bolivian product, won with Paceña, and later again by one of their other beers, Margarett.

The laboratories of the facility check that the quality of everything always hits perfection. The attention to detail is impressive. Every ingredient of the beer must be tested individually. Some of the tests seem almost eccentrically precise, including one test that measured the frothiness of the head! The reason is for all this is consistency. CBN refuse to let a single beer out of the facility that could be under par in any way. Incredibly, one bottle sat on the shelf having been recalled because the label had peeled off by about 2 or 3 millimeters in one corner. Attention to detail is a theme that repeats itself throughout the facility.

The resulting quality and recognition of awards have lead to CBN becoming a truly international exporter. Such destinations of their products include Switzerland, Italy, China, Australia, Spain, England, United States, Peru, Chile and Argentina. Nationally and internationally the marketing for each product is carefully considered so each beer reaches a range of different buyers and consumers.

The last part of the production line comes just before the beer is shipped off; the tasting. Usually this is done by various members of the company on a sort of rotation process, but today the honour was given to your correspondent. Maybe it was the icy cold freshness of the newly tapped nectar, or perhaps it was the attention to detail that had some psychosomatic impact, either way, with that first taste all the precision, the vast market share and the numerous awards made perfect sense.