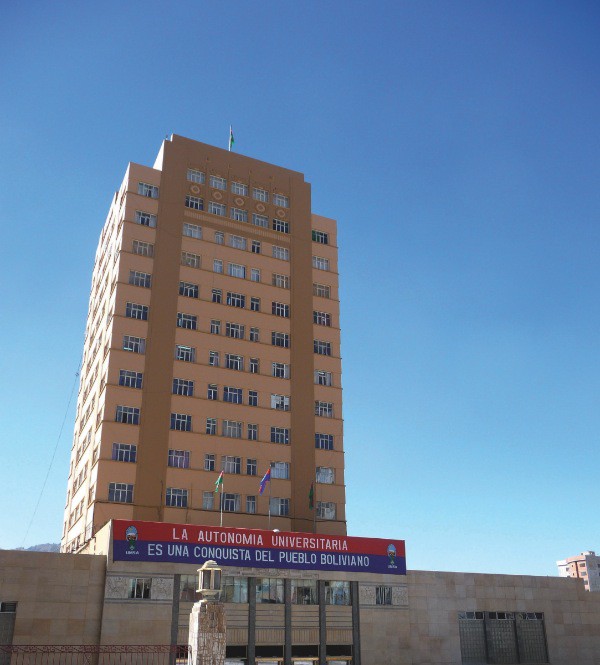 As a student in the UK, I’m more than mildly aware that for the majority of eighteen- and nineteen-year-olds there, university is the next logical step after college. For many, university is about moving away from home, making new friends, extracurricular activities (for the more enthusiastic), realising their gap year didn’t make them half as sure of themselves as they’d thought, and, of course, having the freedom to pump themselves full of all things bad and beautiful so they can forget how little work they did the day before. No prizes for guessing that in Bolivia, this is different.

Having just begun a year abroad, I hardly expected to return to higher education so quickly; but this month I’ve been doing a little research to see just how different university in La Paz is from the world I only recently left behind. For the majority of students in Bolivia, university isn’t as great a leap as it seemed to me in England. For starters, most students don’t leave home. One of my interviewees, Claudia, studies Engineering at a well-known public university in La Paz, the Universidad Mayor de San Andrés (and if this doesn’t roll off the tongue, try UMSA). “My family is very traditional,” she tells me. “Normally, women don’t leave home until they get married, so my parents didn’t want me to leave.”

Ivan, a recent graduate from a private university, the Universidad Católica Boliviana (or UCB), asserts that “it’s just not the done thing. People don’t leave home. University is a lot like school; in some ways, there isn’t really much of a change.” Of course, if students come from far away – like from Santa Cruz or Cochabamba – they live in student accommodation; but evidently these are few and far between. None of the people I talked to knew anyone living away from home. Living at home obviously has financial benefits, too, although that’s not to say university is expensive, especially not for the public students (although costs vary depending on course – the UMSA website tells me that dentistry, for instance, costs six hundred bolivianos, whereas most humanities degrees cost about half of this figure).

Nonetheless, in general it’s the UMSA students who decide to take jobs while studying, and for reasons aplenty. Sharoll, who studied Business Administration at UMSA, suggests that, given the pressure to marry to avoid illegitimacy, some students already have families to support. “The public university students tend to have a lower income,” Ivan tells me, unsurprisingly. European students are no stranger to just how much all the little things – and at times the most important ones – can cost; from pencils and pads to sports gear and other unmentionables, there are plenty of things to drain any student loan. However, the time constraints imposed by working and studying simultaneously can have serious consequences: many students are forced to limit the number of modules they study per year in order to juggle university with a job – and there are very few part time offers – which extends the time taken to complete their degree. (I struggle to imagine just how many years I’d be at university if I added a few months for every essay or half-arsed translation I’ve handed in late). Again, this is generally a public university phenomenon, Ivan explains; he himself has an UMSA student working in his office. UCB students can choose the number of hours they study per week – Ivan suggests an average of twenty four – meaning they can complete their undergraduate studies more quickly. Because of this, whereas a UCB student can complete his or her course in four to six years, a degree at UMSA can take anything from four to fourteen to thirty years (resist the temptation to imagine a Bolivian version of Van Wilder, please).

The sheer effort it can take to complete a degree at UMSA means that in many circles its graduates are held in high esteem; nevertheless, it’s the Universidad Católica that’s thought to be the best, Ivan insists (though there’s a chance he’s slightly biased...). With more money, it has better facilities and more space; indeed, one of the principal issues Claudia has with UMSA is that there isn’t enough space to study or relax and the university is slightly run-down. “The main problem is a physical one,” she states. Her department, engineering, is excellently equipped for the job, but teaching and facilities vary from subject to subject; both medicine and literature, Sharoll tells me, are very well taught, whereas the much less popular anthropology is aptly considered a weaker department. But how do all of these issues – accommodation, employment, space – affect the student community?

Sharoll, Claudia and Ivan all agree that there is little interaction on a university level, given that clubs and societies are virtually non-existent, but much more on a departmental one. At UMSA, the student community is strung together by a board of student representatives called the Centro de los Estudiantes, though the knot is not well tied: neither Sharoll nor Claudia seems sure of exactly what the Centro does. The elected students are meant to look out for the student body as a whole, Sharoll explains; Claudia adds that at first they are eager to show their support, but their enthusiasm soon dwindles. Ivan doesn’t even know if a Centro-type organisation exists in the UCB, which goes to show how significant it is (or would be). “No-one is interested in that sort of thing,” he says, “there’s no motivation. It’s a waste of time.” Ivan’s final comment makes me wonder: just how important is university today in Bolivia? He guessed that only around sixty per cent of people go to university in La Paz, and it’s very likely this figure is much smaller outside of the capital; for many, particularly those who come from and will remain in an agricultural background, higher education is neither a logical nor helpful step towards the future.

The lack of a Centro type organisation at the UCB, and its inefficacy at the UMSA, point to a political apathy in students’ lives that seems to reflect the current state of affairs in England. It is perhaps telling that, as Ivan adds, there is a growing tendency amongst private university students to put studying on the back burner and prioritise all the sex, coke, and cumbia that have become such common components of university life in England.