Out of the Closet, Into the Fire? 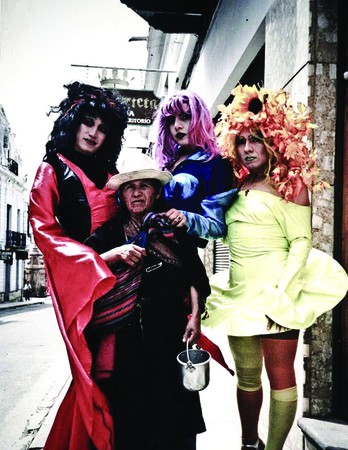 Changes in Bolivian Laws signal some progress towards recognising sexual freedoms, though for gay rights to improve in practice, society must follow suit. Can culture hold the key for change?

A good starting point to understand the historical development of gay rights in Bolivia, is an examination of how the LGBT community was regarded in pre-colonial times. According to Bartolomé de las Casas (a Spanish historian and Dominican friar), upon the arrival of the Spanish in Latin America, the amount of sexual diversity in practice amongst the indigenous people was ‘surprising’. Brothels with male prostitutes offered light relief for warriors coming back from battle, and images of men dressed as women were worshipped in sacred buildings. In fact, if a man wished to dress as a woman he could do so, find a husband and marry. Unsurprisingly the conquistadores, sentinels of the intransigent Catholic Church, found these practices abhorrent and promptly set about eradicating them.

Since the Catholic Church bases its attitude towards homosexuality on interpretation of the Scriptures, which define homosexual acts of intercourse as being in opposition to the divine nature of procreation, such behavior is considered ‘disorderly’. Interestingly, a dominant interpretation of the Scriptures holds that while homosexual desires isn’t itself sinful, the acts to which these desires give rise are. As a consequence, the Church’s response at the time was to deliver the corresponding treatment to those engaged in this type of behaviour, and regard all homosexual conduct as ‘diseased’. Yet, as we now know, this wasn’t an attitude confined to former Spanish colonies; the world as a whole had to wait until 1990 for the General Assembly of the World Health Organisation to remove ‘homosexuality’ from its list of mental illnesses, marking the long overdue evolution of attitudes within Western society.

Despite these advances, more than 500 years later, the Church (in it’s various guises, from Catholic to Evangelical), still exert a strong influence over Bolivia’s public morality. It goes without saying they don’t support the now universal fight for sexual rights. As a result, many ‘out and proud‘ homosexuals in Bolivia are subject to discrimination across various sectors of society. A national survey founded by ‘Emancipación Conexión’ in 2011, reported that 33% of Bolivian gays have said they have been discriminated against at school, by both teachers and classmates, with 15% claiming unequal treatment in access to healthcare services. This happens despite several articles in the 2009 Bolivian Constitution which declare all forms of discrimination against race, age, gender identity, and sexual orientation, to be illegal, and which understand freedom of sexual orientation as a fundamental human right.

Despite the discrimination being tightly woven into dominant social attitudes, the LGBT community has sought new forms of expression and found increased engagement with society at large, most notably in La Paz and Santa Cruz, the two largest cities in Bolivia.

While there have been important advances in urban areas, as far as gay rights and social acceptance of homosexuality are concerned, rural regions seem to exist in a different time-space continuum. In the campo, Andean conceptions and beliefs are combined in mysterious ways with Catholic values. Reflecting upon his work in the community of Wila Kjarka, the anthropologist Andrew Canessa explains: ‘they know about different sexuality, they know about homosexuality, but they don’t do it themselves. Homosexuality for them is what mestizos and gringos do. [Other researchers] might say I’m wrong, but I have no evidence at all that people have same sex relations’. Whether or not widespread same-sex relations exist, they appear to be virtually invisible. Traditional metaphysical beliefs, in which the sun and moon have a union of ‘duality and complementarity’, hold that men and women should emulate this cosmic duality. Those who are deemed to be homosexual, are dubbed k'ehua—neither man nor woman. Either due to discrimination or alienation, many rural gay people migrate to the comparatively more accepting urban areas.
Although far from being internalised by civil society, the recent additions to the Constitution signal a development towards a more accepting attitude, as well as a desire to make room for minority communities in Bolivian society. After all, in a Plurinational State made up of 36 nations, almost everyone is part of some minority or another. Yet there are ongoing challenges. In 2012, two bills were submitted to the legislature, one requesting the right to a ‘cohabitation contract’ for same-sex couples, and the second for the introduction of gay marriage with a right to adoption, though there’s been minimal progress to date on both fronts. The Constitution itself hasn’t been without its setbacks: an early draft declared that marriage was a civil contract between two people, yet the final version of the Constitution adopted in 2009, was altered to specify that this civil contract was between a man and woman, no doubt influenced by the Church’s ‘invisible hand’.

Statistics from the 2011 survey report that when members of the LGBT community come out to their family, 65% say they were accepted, yet 22% were ‘chased from their homes’. So what is it like to be an out-of-the-closet gay in Bolivian society? I asked Maria Galindo, an openly declared lesbian activist, whose feminist group Mujeres Creando not only promotes depatriarchalisation, but also urges society to confront homophobia. Galindo says that by outing herself as a lesbian, she ‘started a social fight,’ and that the problem lies in ‘a concept of normality in which there is no space for the gay man, the lesbian, the single mother, the clever girl or the fat girl’. Nevertheless, Galindo says that although as a woman in a machista society she faces male threats of violence, she also receives a lot of love and acceptance from those around her.

Another out gay Bolivian, David Aruquipa, is a member of the self-identified drag queen family La Familia Galán. Danna Galán, as he goes by, says that this family does not submit to the ‘conservative and Christianised concept’ of traditional families, and that they are ‘free, poetic, loving and connected’ to each other. Although La Familia Galan are a family of drag queens, they prefer not to be defined and categorised by their identity; be it heterosexual, homosexual or transvestite. Their cultural and political activities, most recently given a platform by their TV show ‘Transformando’, have been as much about performativity as sexual diversity.

From talking to Maria and David/Danna, it’s both surprising and refreshing to see that discourses surrounding gay rights have evolved substantially from traditional stories of pure oppression and discrimination. In these new voices, their communities are finding exuberant, fierce, and creative expressions capable of reaching new corners of society. Moreover, their unique experiences suggest it’s not necessarily possible to speak of a single LGBT community in Bolivia. The sexual diversity that can be found in the country is as beautifully fragmented as the voices it gives rise to.

So what is the future for the homosexual community in Bolivia, if it’s conceivable to speak of such a univocal entity with a single set of interests? One can hope Bolivian laws and attitudes ride the wave of events happening elsewhere, and legalisation of gay marriage eventually arrives. Given the influence the Church has maintained over the centuries, this may not happen soon. One important lesson from the Constitution is that laws are useless without a change in social attitudes. As Maria Galindo puts it, ‘there is nothing more useless than a rhetorical law’. As far as society is concerned, David Aruquipa seems to have found that the best remedy for discrimination can’t come from outside, it must come from within;

I criticise the notion that gender and sexuality are peripheral issues which are not part of culture, that they only belong to gays and lesbians. Culture has never engaged with these themes upfront. We are here to say that gender is not simply the concern of feminists, and that sexuality isn’t simply a property of TLGBs. We take culture as the starting point from where everything is transformed.

At the start we used to be marginal, but the Familia Galan has now been co-opted by society, who’ve taken over and appropriated the Familia. By being a standard feature of Carnival [through Kullawada], we’ve forced our entry into the sphere of what’s most sacred in popular culture: traditional dance. Entering this space has resulted in the Family not acting from the margins, but becoming infiltrated at the core of society like a virus. We want to engage in a constant deconstruction of cultural dynamics to transform this space. We are penetrating popular culture.